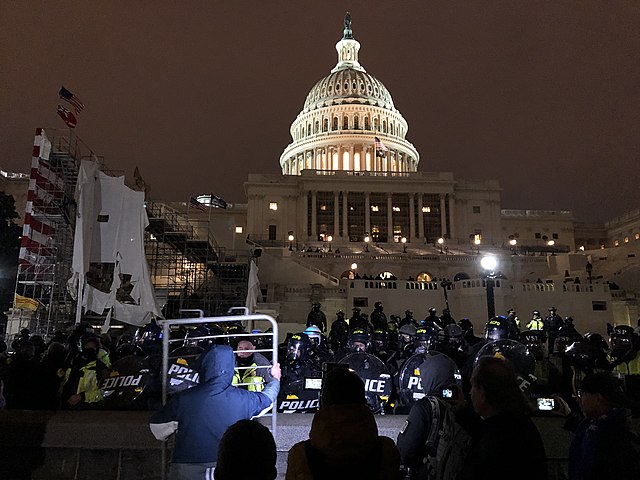 With the post-Capitol riot, partisan-fueled witch-hunt for so-called ‘extremists’ in full swing across America, the Pentagon is struggling to define a term, and a problem, that many believe doesn’t truly exist. Recently, as I wrote here, two top U.S. military commanders testified to the Senate that they had ‘zero’ extremists in their ranks, and by that they meant none had been found, and they were still looking.

But the message from these two commanders was clear – the ‘extremist’ label is ill-defined and over used. It either means nothing, or it can mean anything.

As I have written before, this issue is being politicized and weaponized by the Left and Democrats to potentially smear and demonize large swaths of the U.S. military, including Guard and Reserves. Almost anyone with conservative views can be targeted.

Jason Beardsley, the executive director of the Association of the United States Navy, recently penned an opinion piece for Fox News titled: Pentagon’s ‘extremism’ blunder – could make US military even more political. He notes that the term ‘extremist’ was gratuitously added to existing rules for military members prohibiting certain activities.

He stated how in 2012, the Pentagon amended DOD Instruction 1325.06, which outlines activities from which military personnel are prohibited, and added the word “extremist” into the rule. He notes that:

The rule was reasonably clear before – it said active-duty personnel cannot “actively advocate supremacist doctrine, ideology or causes, including those that advance, encourage or advocate illegal discrimination based on race, creed, color, sex, religion, ethnicity or national origin…” It also said military personnel can’t actively participate in any groups that advocate this discrimination.

So, already since 2012 military personnel have been prohibited from advocating racially “extremist” doctrine or actively participating in groups that advocate “extremist” doctrine. Yet, a few weeks ago – nine years after the rule change – DOD admitted it has no idea how adding “extremist” to the rule made any difference.

Beardsley explains that on April 9, Pentagon spokesman John Kirby said officials “want better guidance about what extremist activity really is,” and that Defense Secretary Lloyd Austin heard a “hunger for more information and context about what we’re talking about here.”

The fact that no one at DoD has a clue about what the hell ‘extremism’ means should be the first red flag. But rather than taking this opportunity to ditch the useless and potentially politicized term, Biden’s Department of Defense (DoD) is doubling down.

DOD appears to be ready to take two new steps. The first is to define ‘extremism,’ something DOD said it will do in the next version of the rule. The second, we suspect, is to move closer to outright prohibiting military personnel from being members of “extremist” groups – DOD appears to recognize how bad it would look to state this goal explicitly, so we expect word games that offer more confusing hints in this direction.

In my next piece I will outline Beardsley’s ‘Five reasons why defining “extremism” is another move in the wrong direction.’ And why the term ‘extremist’ should be expunged from DOD Instruction 1325.06 as redundant and dangerously political.

Current Pentagon instructions and prohibitions are more than adequate to handle any dangers posed by a small number of bad actors inside the military. ADN

As a US Marine We were not allowed to participate in many actions that seem to be happening today . Why not enforce the rules and orders instead of making it all political .

You’ve got that right. When did it become a crime to be white in MY COUNTRY?

Extremism is forcing me to your point of view, and that will lead to a very bad time for you

It’s called propaganda. Leftist rioting and looting is defined as “mostly peaceful protesting” while being a member of Oathkeepers (a veterans organization whose mission statement is to defend the Constitution) is considered “extremist.” The United States has 8 million more gun owners right now as compared to this time last year, and its not to go deer hunting.

As mentioned in previous correspondence the Great State of Florida and other States can disarm and disband any federal agency or federal law subverting, coercing, undermining the United States Constitution. Juris Doctors are indoctrinated into “codified law” not only for their purse but power. “Codified Law” is not true law, it is a ruse meant for subjugation. 🇺🇸

Agreed. If there is a problem, be specific about what it is, not just label it. Such labeling is just a leftist tactic to avoid actually discussing a potential problem.

We were once free

When Obama was our leader, I openly made anti- statement to how he was a liar. I was threatened by the command, and told no one is to be a legally allowed critic of the commander in chief. When Trump was president, even army times openly were critics in print, with no punitive actions like that which once faced me. The new Secretary of Defense truly a moron, he told 60 minutes he faced racism in army, yet rose to be one of the highest ranking generals? It is not like this idiot was wIth me, a no body washing dishes on KP. No politics are allowed in military, I was rightfully threatened, bur our supporters of the illegal globalist dictatorship get extra freedoms. The capital riots were wrong, but the punishment was unjust, if BLM and Antifa communist are legally allowed to use terror against the innocent to include murdering cops, to advance the dictatorship party as was tools a of the propaganda one party media and illegal federal government. Why would a federal cabinet chiefs illegally weaponize their agencies to punish critics of our illegal government unless they fear our people? The biggest treasonous crime against America, was not the capital riot, but the rigging of an election. Unless they cheated, why would they fear us? We once had the right to fair elections, now HR1 will rigged all future elections. The capital rioters held months without bail in solitary confinement, they were beaten regularly by assign racist black jail guards in their cells, one lost an eye. This is our new America, of our globalist commune leaders want us to enjoy the show, as they turn your children into brainless propaganda taught supporters of globalism and their dictatorship. They will shove 1619 up the asses of innocent little children to indoctrinate into global communism. “Dictatorship of evil”

Patricia Couey
Reply to  We were once free

You are so goddamned right. I left the gun store today after buying a BIG gun for my BIG son and the salesman told me that the 2nd civil war is right up the road. Everyone is silently preparing for it. I have to agree if this asshole puppet who they propped up to steal our election and now our nation, signs any more fucxxng executive orders stealing our rughts.

Gardener fixer
Reply to  We were once free

If you want to know what rigging elections looks like go to Wisconsin. The Republicans gerrymandered districts and for the first time in Wisconsin history no Democrats were able to gain control of either the assembly or senate since the 2010 census. And because they don’t have to worry about the People’s vote they have become even more extreme in their laws in their proposals and policy. Lost several billion dollars in federal money in transportation and Medicaid in the last decade.

Got it! One big Joint Chief treasonous Communist circle jerk!

The Biden administration and the Washington Democraps are the extremists.

If they feminize the military any further, China can just walk right in and take us over. Without firing a single shot. Is that the goal of this fuxxed up ideological administration? Where have all the real men gone? The next thing you know, the Marines will have to wear pink underwear like Sherrif Joe gave his prisoners. Bring back America, before it’s too late.

This is the disease of today: blurring the lines of reality with ‘blanket’ terms like racism or extremism or assault weapons, that mean everything and nothing. This is a blatant attempt to gain a runway to criminalize anybody and everybody at will. And thus passes our freedom of choice and movement and self-expression.

“I would remind you that extremism in the defense of liberty is no vice!
And let me remind you also that moderation in the pursuit of justice is no virtue!”

Very sad to see leaders of the republican party criticized and booed. A past and potential presidential candidate was booed by Republicans at a republican event! To me that’s extremism. One of our own. It’s worse even then booing a dead war hero.

[…] witch hunt against conservatives in the U.S. military. As I have written several times, here, here, and here, the far left, enabled by the establishment media, has been pushing a false […]