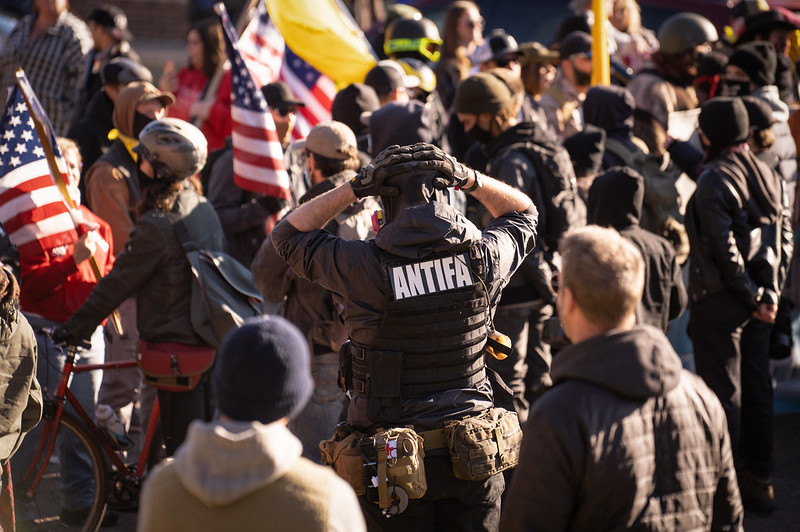 November 28, 2020 - St. Paul, Minn. -- A man with an ANTIFA patch on the back of his vest arrives to a Proud Boys, Trump, Stop The Steal rally. Photo by Chad Davis via (https://creativecommons.org/licenses/by/2.0/) Flickr
Tweet
Share
Email

In my previous piece, ‘Extremism Means Nothing, or Anything, I explained how the Pentagon is struggling to define a term, and a problem, that many believe doesn’t truly exist. All as part  of the post-Capitol riot, partisan-fueled, witch-hunt for so-called ‘extremists’ in the American military.

I earlier wrote how two top U.S. military commanders testified to the Senate that they had ‘zero’ extremists in their ranks, and how the ‘extremist’ label is ill-defined and over used. It either means nothing, or it can mean anything. I also referred to an excellent article by Jason Beardsley, the executive director of the Association of the United States Navy, titled: Pentagon’s ‘extremism’ blunder – could make US military even more political.

He notes that the Department of Defense (DoD) already prohibits racial and other ‘extremist’ activities, without the need for the term, which was gratuitously added in 2012 to existing rules, but serves no real purpose. However, as the Pentagon strives now – nine years later – to actually define the term ‘extremism,’ it is in danger of being highly politicized by this and future administrations – but starting with Biden.

He goes on to provide five solid reasons for why the term ‘extremism’ should not be defined, but instead purged by DoD. And reason number one Beardsley notes is how it will be politicized:

A DoD definition of “extremism” will be a political definition, one that fits the Biden administration’s political point of view. Will it say anyone involved in the Jan. 6 protest at the Capitol is an extremist because some of those protesters were violent? We shouldn’t want either party to write a definition of “extremism” for the military, and given broad Republican opposition to this effort, DoD appears likely to hand down a partisan definition.

Beardsley continues with reason two which follows from reason one:

Once DoD defines “extremism,” it will be compelled to decide which groups fit that definition and ban membership in them… The list of “extremist” groups will swing wildly as DOD changes hands from Republican to Democratic control, or Democratic to Republican control. Americans who wish to serve will face a permanently changing DOD preference on who can serve, and who cannot.

Morale, as usual, will suffer. By making this a priority, DoD is wandering further away from the military’s core mission, which is to defeat the enemy in combat. Rather than focusing on the outside threats to America, DoD runs the risk of making an enemy of millions of Americans who pledged to defend the country.

The fourth reason Beardsley cites is:

DoD’s new definition will almost certainly create more confusion. Think about it – the Pentagon lived for nine years with a definition that it now admits is completely unclear. It’s quite possible that DoD hands down another soft rule that confuses everyone up and down the chain of command. The department has shown a past willingness to placate the crowd with unclear dictates. It won’t be a surprise if the new rule leads to new uncertainty.

Finally, defining this term is simply not necessary:

If the Biden administration is looking for a way to expel military personnel who participated in the Jan. 6 riot at the Capitol, it already has that authority. Members of the U.S. armed forces are banned from taking place in rallies in uniform and can’t engage in activities with a group that seeks to “deprive individuals of their civil rights” if those activities are “detrimental to good order, discipline or mission accomplishment or are incompatible with military service.”

Beardsley concludes by recommending that the Pentagon stop trying to define a highly politicized term that has no business being in the DoD lexicon, and purge the word ‘extremism’ from all DoD instructions:

The department [DoD] can already toss out service members for a range of bad behavior. Making constantly changing lists of good guys and bad guys will only further politicize a department that is already dangerously politicized. The Pentagon should be strategizing on how to insulate us from bad actors who threaten America. Instead, it’s being snookered into thinking its real job is to target Americans who dare to even question the woke fascism that is pervading this country.

And the demorat funded blm and antifa terror groups.

As mentioned in previous correspondence the Great State of Florida and other States can disarm and disband any federal agency or federal law subverting, coercing, undermining the United States Constitution. Juris Doctors are indoctrinated into “codified law” not only for their purse but power. “Codified Law” is not true law, it is a ruse meant for subjugation. 🇺🇸

From the standpoint of peaceful coexistence, the military itself is an extremist organization. But we conform to a world standard which tends toward conflict and wars. If the military is to set the standard on who or what is “extremist,” then we are in a slow death by quicksand. In other words, the swamp has engulfed us all.

Enlisted Men Must Choose Between The District of Columbia, Joint Chiefs or their families and the States. CIVIL WAR IS INEVITABLE!

Why are law enforcement all over America being defunded, demoralized and forced to retire? In totalitarian countries there is no law enforcement. Only rule by mob. The new Woke Army to protect the billionaire Elites and our new Socialist leaders. BLM/Antifa, have been training all year in Portland to be the Enforcers for the Socialist Party. They have been practicing citizen mob warfare all year in Portland. Looting, burning and beating are their methods. Burn it Down is their mantra..

This is just one more thing that the Democrats/Leftists?liberals/Socialists are doing to try to truly divide this country. It isn’t bad enough that they have the general population fighting against each other now they want to divide the Military. Will we need TWO Of Each Branch of the Military, one for each faction within the government? Will one Branch only fight a war that their government faction approves of? I would like to remind each and every member of the military of one very important fact. You as I once did, took an oath to Protect and Defend this country and its Constitution from All Enemies both Foreign and Domestic. You took that oath to protect the people of this country and NOT the politicians who seek to divide us.

The demonazimuses the term extreme to openly hunt political opponents or anyone that dares to criticize them.
“Bill Clinton admits Democrats joined the KKK to get elected” video

The dems use the term extreme to openly hunt political opponents or anyone that dares to criticize them.
“Bill Clinton admits Democrats joined the KKK to get elected” video

The Demon-crat idea is Orwellian: to come up with universally applicable ‘elastic’ terms such as ‘racism,’ ‘extremism,’ or ‘assault weapons‘ so that they have convenient labels to stigmatize AND effectively criminalize anyone who disagrees with THEM.

Our country is being destroyed from within and with the blessings of Harris/Biden/Obama. The Supreme Court has refused to hear the case of an obvious rigged election. Police are being ambushed. BLM and ANTIFA are allowed to burn cities down yet protesters at the Capitol were arrested and bail not allowed. Maybe apathetic voters will finally wake up or is it already too late? Biden wants complete control of children’s education, from pre-K onwards. The same way Hitler changed a country.

Germany’s National Socialist Workers Party ( Nazis ) were considered extremist in 1930 and by 1934 all the other parties were called extremist. Like racism, if extremism comes to mean everything then it will mean nothing. Cry racist, cry wolf. Cry extremist, cry wolf!

As to January 6, I might add that I have seen far worse than the thousands of selfie-taking gallivanters punctuated with a couple of hundred deluded insurgents. I saw the towers come down, the Pentagon violently punctured and a burning field in Pennsylvania.

The military must have the wisdom of the ages and avoid the political deep fake being used to leverage its power. What would George Washington do?

THERE IS EXTREMISM IN THIS WORLD AND PEOPLE BETTER START FACING REALITY.. WHEN YOU SEE EVERYDAY THE ACTIONS OF BLM AND AND HEARING WHAT ATIFA DOES AGAINST OUR OFFIERS. — DO NOT GET IMMUNE TO WHAT THESE FANATIC DO THEY ARE WHAT YO CALL EXTREMISM./ AND THEY ARE SHOWBOATING FOR ATTENTION FROM US – DON’T GIVE THEM ANY. THEN WE HAVE THE FANANTCS OF THE PRES. OF CHINA WITH THAT EVIL SMILE ON HIS FACE CONSTANTLY LOOKING DOWN ON US. AND BIDEN ISN’T HELPING THE SITUATION AT AL —THAT AGAIN IS EXTREMISM WHAT THEY ARE PLAYING WITH US,.AND THEN LAUGHING AT BIDEN . EXTREMISM IS PEOPLE WHO ARE GOING OVER THE LINE TO GET ATTENTION . JUST LIKE WHAT THE 2 TERROR GROUPS DID ON JAN.6 AND THE DEMS KEEP BLAMING THE TRUMP SUPPORTER . . WHEN YOU READ BACK THE TRUMP SUPPORTERS WERE NOT SHOWBOATING AND THEN YOU REALLY SEE WHO WAS SHOWING ATTENTION . LOOK AT THINGS WITH HONEST EYES AND YOU CAN TELL THE DIFFERENCE.

Check through history and make a list of when the “Good Guys” banned books and shut down free speech…I’ll wait.