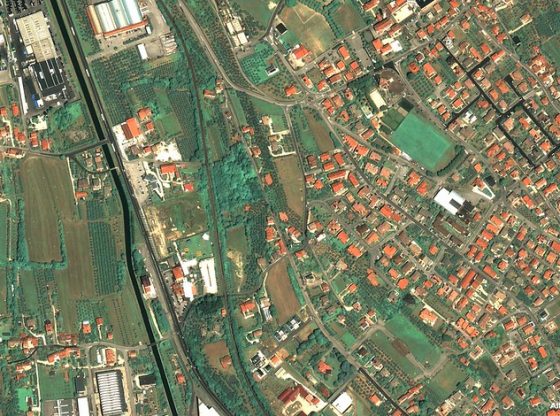 Deepfake satellite imagery generated by artificial intelligence (AI) could be the latest front in the misinformation wars. Researchers at the University of Washington have developed a way to generate deepfake satellite photography using an AI algorithm as part of an effort to detect manipulated images.

As the technology is becoming increasingly sophisticated it is highlighting the concern that deepfake, bogus satellite imagery can have on national security.

The Verge notes that:

Such pictures could mislead in a variety of ways. They could be used to create hoaxes about wildfires or floods, or to discredit stories based on real satellite imagery. (Think about reports on China’s Uyghur detention camps that gained credence from satellite evidence. As geographic deepfakes become widespread, the Chinese government can claim those images are fake, too.) Deepfake geography might even be a national security issue, as geopolitical adversaries use fake satellite imagery to mislead foes.

The US military warned about this very prospect in 2019. Todd Myers, an analyst at the National Geospatial-Intelligence Agency, imagined a scenario in which military planning software is fooled by fake data that shows a bridge in an incorrect location. “So, from a tactical perspective or mission planning, you train your forces to go a certain route, toward a bridge, but it’s not there. Then there’s a big surprise waiting for you,” said Myers.

…there’s little doubt the AI-created fakes could be used for misinformation. A hostile country could send falsified images to mislead military strategists — they might not notice a missing building or bridge that could be a valuable target. Fakes could also be used for political aims, such hiding evidence of atrocities or suppressing climate science.

Researchers hope this work will help develop a system to catch satellite deepfakes in the same way that early work exists to spot human-oriented fakes. However, it might be a race against time — it didn’t take long for early deepfake tech to escape from academia into the real world, and that might well happen again.

Scary. But the biggest threat to national security in America is the democrat party….

Add to that, low information and pure ignorant voters who put Dems in office and those who believe ‘free stuff’ is actually ‘free’.

Ppl are saying our grand kids will be paying for this imposter. That’s if we still have an America Cus joe blow is killing it systematically just like obutturd tried to do.

Truth, does anyone know how many fake Biden’s or Hitlerys are out there.

Wrong. We have met the enemy and it is us. Republicans at a republican event booed Romney one of the leaders of our party. If Trump died tomorrow who would lead our party? While we immerse ourselves in hamburgers and Dr. Seuss and trans scams, the Dems will be repairing our roads, providing free education and child care and forcing corporations to pay for it. It’s about policy and pocketbooks.

Romney is one of the leaders of our party? The enemy is us, indeed.

Romney couldn’t find his butt with both hands let alone Lead the Party. His only accomplishment has been to Stab the Party in the Back and kiss up to the Biden Socialist Regime.

Hidenbiden and his administration are the biggest threat to our democracy,national security, national security of our border,religious freedom,American peoples security. The repukes need to grow a spine, and shut this border down, before this country falls to the cartels,criminal gangs,criminal dumbocraps, we are being more than invaded, Hidenbiden needs to be arrested, for his incompetence, he’s unfit,unstable,unhinged, to run the country, he’s an embarrassment,laughing stock of the world, he needs more than a doctor.

Democrat’s, with the invaluable help from senile, puppet Joe are creating multiple crises so they can take more control to allegedly correct those crises. This tactic has been played before yet many don’t know or learn anything from history. We’re being played!

Sure are the dimwits who praise him for the stimulus don’t really know what’s going on. He is not creating jobs he is dismantling them one by one. Everything he does some presume good is made to bring America down to its knees

They’ve been “photoshopping” images in media for quite awhile, to help create the stories they wanted to report as opposed to whatever the reality actually was. Here is a link to a webpage with 42 examples, many from long before anyone reading this was likely born:
42 famous Photoshopped and doctored images from across the ages
https://www.pocket-lint.com/apps/news/adobe/140252-30-famous-photoshopped-and-doctored-images-from-across-the-ages

Fake news with fake / manipulated images from across the ages, so it kind of seems only natural they extend it to fake news via doctored satellite images as well. 🙂

Also photoshop ppl that are dead now! They can do anything. They can put a person in a certain place at a critical time even make them move talk what ever. Ppl you are seeing almost everything fake so you are fooled into thinking what they want you to think… it’s all a ploy by the left and the media and the devil worshipping chilid blood drinking satanistic devil worshippers. You think there aren’t women held captive forced to have babies so this sick ppl can drink their blood etc. you ppl think God is gonna let that keep happening. You figure it out. Everyday the noise keeps getting tighter…

Ifn that lurch looking puke Kerry came to Dodge, Matthew wouda throwed him in the cell till the judge came ta town. That traitorous dog ain’t fit to live.

We could move sattelite imagery of edwards AFB to DNC headquarters and visa vee. making edwards AFB a stupid target in the eyes of soviets, or china.

Who is the enemy if everyone’s doing it? Democrats must be really ignorant because they don’t seem to know or use the word fake. Only the far right believes everything is fake: mass shootings, pandemic, weather, even our own leaders like Romney. I just don’t know how some of us can function if we believe every single thing that we hear that isn’t from our own trusted friends is not real. Republicans will lose by believing in fakeness and lies, and the Dems will win by seeking the real and truth. We have to be curious and want to know what is real. That’s why we have libraries and Google, although some people are so ignorant they can’t believe in anything except their own anger. The only permanent thing in this world is change, but there’s a whole group of unchangeable’s out there. Our party will not survive them.