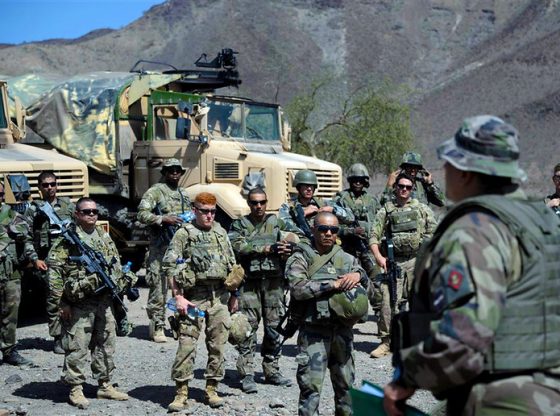 Following months of deadly and brutal domestic jihadist terror attacks against civilians and police throughout France, numerous serving military officers, and thousands of other military personnel, signed a public letter warning France is headed toward ‘disintegration’ and ‘civil war.’ This, if the domestic Islamist threat isn’t quickly contained.

Initially, it was noted that 100 ranking officers, including between 20 and 25 retired generals, and over 1,000 military personnel signed the letter, but those numbers later swelled to many thousands.

The letter produced both active support from many politicians and many common French people, and a furious reaction from the government.

France’s Minister-in-Charge of the Armed Forces, Florence Parly, warned that any active member of the military who signed the letter will be punished for breaking a law which requires them to be politically neutral. But nationalist opposition leader Marine Le Pen, a candidate in next year’s presidential election, spoke out in support of the former generals.

Le Pen called on the generals to join her in “the battle of France.” Her response came on the same day as a fatal knife attack at a police station south-west of Paris, which is being treated as a possible terrorist attack.

The letter says that “the hour is grave, and France is in peril.” It goes on to warn of “Islamism and the hordes from the suburbs” who “scorn the country” will lead to deaths “in the thousands.” These are references to the no-go zones created by swarms of mostly North African Muslim migrants who refuse to integrate and are regularly creating chaos and violence.

The soldiers continue by blaming other groups for inflaming the tensions, saying that young, non-white French activists are stirring “hatred between communities” by calling for the demolishment of statues of French figures from colonial times. They also called out the French government for attempting to scapegoat the police by using them to repress the populist “gilet jaunes” (also known as the Yellow Vest movement.

The letter goes on to reference the brutal beheading of French teacher Samuel Paty by a radicalized Chechen Muslim immigrant in October 2020, saying: “Who could have imagined 10 years ago that a teacher would one day be beheaded on leaving school.”

It concludes by imploring:

Those who run our country must imperatively find the needed courage to eradicate these dangers,” the commentary read, going on to state that firmly applying the laws of the land often sets things right. If not, civil war could “end the growing chaos.”

What did they think would happen when France opened the flood gates to a hostile force?

No, because at least the French Military can speak up. Biden and his cronies are in the process of purging the US Military with a 60 day “Standdown” to hunt for “domestic terrorists” and “extremists” in the ranks – and they are not looking for BLM or ANTIFAS types in uniform. Nope, it’s soldiers who might not agree with transgenderism in the trenches or who think that we should have secure borders. THOSE kinds of extremists and domestic terrorists. The French are freer than we are.

Does this sound familiar to everyone in America. This same thing is happening every day but with BLM and Antifa joining the Muslems. If we don’t get rid of Bid and the hateful liberals, our country will become, Muslim, Socialist and a civil war will ensue.

Gee even other countries are dealing with progressive issues we are headed for in a similar fashion. The whole world is going to have a civil war to fight against infidelities trying to change laws everywhere that have worked and worked well. Gee could this be more part of the new world order????
New world order will never work. They’ll be hangings for a long time… thee worst thing they are doing is with the babies and young children. Do you actually think God is gonna let this keep happening???

Are these hordes referenced the same “refuges” welcomed en masse not long ago? Europe was warned of a take over and submission by radicalized Muslims. We must pay heed to the words and goals of any Islamist threat.

France let a Horde of Useless Muslim Scum into their Country … now the Piper must be paid ! Give the Damned Muslim Scum 30 days to leave on their own then when caught after the 30 day period … EXECUTE THEM ALL !
The same needs to be done here in the USA … EXTERMINATE ALL MUSLIMS ! !

Best to include the politicians who brought them in.

This is one of the reasons the Commie Biden Administration wants to take our guns , they will have to come and get them and I will not give them freely

The China Biden regime must be removed from power and soon .

Well, France has allowed this process for decades which is odd for the French are very nationalistic. Can Germany and other nations that imprudently allowed swarms of Muslims in now see this as their future? Europe was warned these Muslims would be antithetical to European culture and history and still Angela Merkel and others allowed them in. Is Sweden already steeped in regret?

But are we seeing a similar process in the U.S. where so many despise their own country ( they won’t leave with their loathing, though )? Europe, do you suppose White Supremacy is really an attack on Western Civilization?

OH PEOPLE– I HAVE BEEN WORRIED ABOUT SOMETHING LIKE THIS FOR YEARS SINCE OBAMA WAS ELECTED BACK THEN ——- REMEMBER WE GOT A INFLOOD OF MUSLIMS WHEN HE WAS ELECTED AND IF YOU REMEMBER SOME OF HIS WORDS THAT SENT RED FLAG S UP. AND THEN TO LATER LEARN THAT HE HAD SOME FLOWN IN IN THE MIDDLE OF THE NIGHT AND TELL THE PILOT TO KEEP HIS MOUTH SHUT.. THAT SO PUT ME ON ALERT BUT THEY WERE FLOWN IN ON THE NORTHERN STATES . SO BE CAREFUL BESIDE THE DARN BLM OR ANTIFA. I LIVE IN THE SOUTH . BUT YOU PEOPLE UP NORHTH HAVE YOUR HANDS FULL FRO MICH. TO WIS, TO OHIO, MINN. WHERE THEY HAVE ALL GATHERED. AND THE MUSLIM BROTHERHOOD AND THE CAIR GROUP. WATCH THEM . I REMEMBER THAT SOMEONE SAID WAIT FOR THE WORD . I CAN’T REMEMBER IF OBAMA SAID THAT OR SOMEONE ELSE BUT THAT STUCK WITH ME.

I never read all caps.

Muslims in America have been quiet lately or the press have just not been reporting. I wonder if all the attention going to the border is to cover Muslim activity ????

Islamophobia is a good thing…. wake up everyone.

The USA will soon be at war with all these extremists who hate thus country. Everyone must be alert and ready. The military must be put on alert that we will have nine of thus bs going on In France

The Islamic so-called Religion should never be allowed to enter a Christian Nation because they hate anyone that is not a Muslim and they are told by their Book to kill all nonbelievers. This is a fact according to their Quran.

Sadly we continue to see the ignorance of many over the true threats from Islamist extremists. They follow the Quran the way it was intended by Muhammad in his la.ter days of leadership.. why people don’t get this deadly truth about Islam continues to amaze me.

It’s no longer only in France that this is a problem, it’s now a problem all over
the European Continent; from the Scandinavian countries ( Sweden in particular) all
the way down to the Mediterrean countries; Spain, Portugal, Greece, Italy and so on!
Only a handful of countries in Europe have been spared this nightmare; Poland, Hungary, Slovakia and the Czech Republic, as these countries refuse to follow the orders of the (unelected) bureaucrats in Brussels, Belgium who decide what is best for
the EU! With the current ”leadership” in countries like USA and Canada, this is what the future has in store for those living in North America as well!

see what happens when the citizens don’t have guns and don’t stand up for them selves?

If this were the American Military, the Biden Administration would respond by imposing yet another “60 Day Standdown” to deal with this “racist extremism” – which, btw, is what they are doing, purging the Military of anyone who isn’t a leftist sap in the name of combatting “domestic terrorism” (you know, all those white conservatives who are tearing up our cities). Yes, I’m being facetious.

The best way to get a handle on this is to pass a law that anyone committing a terrorist attack or found planning one will be immediately deported along with ALL extended family members and all will lose citizenship status and all assets in the country.