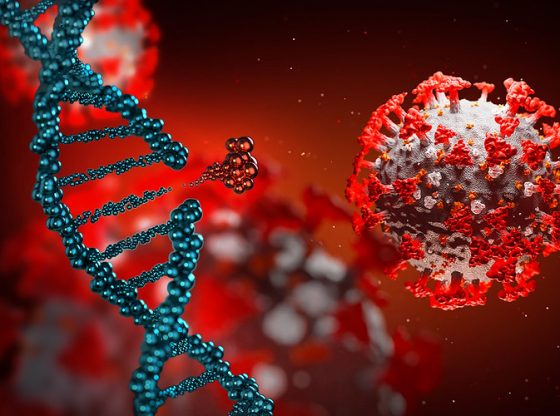 Rendition of Covid-19 Virus by the Department of Energy

In the latest revelation about Chinese Communist Party (CCP) interest in biowarfare and its links to an earlier coronavirus strain – the SARS virus – a document written by Chinese scientists and Chinese public health officials in 2015 confirms they discussed the weaponization of SARS coronavirus. Titled ‘The Unnatural Origin of SARS and New Species of Man-Made Viruses as Genetic Bioweapons,’ the paper predicted that World War Three would be fought with biological weapons.

The 18 listed authors of the document include People’s Liberation Army (PLA) scientists and weapons experts.

The current COVID-19 pandemic has been caused by a coronavirus named SARS-Co V-2 which apparently emerged in Wuhan, China in December 2019. Coronaviruses are a large family of viruses, several of which cause respiratory diseases in humans – ranging from a common cold to Severe Acute Respiratory Syndrome (SARS).

COVID -19 is just the latest deadly addition to that family.

This news of China’s interest in weaponizing SARS was revealed by the Weekend Australian, and the paper reports the following about this scientific paper:

Released five years before the start of the COVID-19 pandemic, it describes SARS coronaviruses as a “new era of genetic weapons” that can be “artificially manipulated into an emerging human ­disease virus, then weaponised and unleashed in a way never seen before”.

Peter Jennings, the executive director of the Australian Strategic Policy Institute (ASPI), told news.com.au that the document is as close to a “smoking gun” as we’ve got.

“I think this is significant because it clearly shows that Chinese scientists were thinking about military application for different strains of the coronavirus and thinking about how it could be deployed,” said Mr Jennings.

“It begins to firm up the possibility that what we have here is the accidental release of a pathogen for military use,” added Mr Jennings. He also said that the document may explain why China has been so reluctant for outside investigations into the origins of COVID-19.

“If this was a case of transmission from a wet market it would be in China’s interest to co-operate … we’ve had the opposite of that.”

As to the Chinese paper’s authenticity, Robert Potter, a cyber security specialist who analyses leaked Chinese government documents was asked by The Australian to verify the paper. He says the document definitely isn’t fake.

“We reached a high confidence conclusion that it was genuine … It’s not fake but it’s up to someone else to interpret how serious it is,” Potter said. “It emerged in the last few years … they (China) will almost certainly try to remove it now it’s been covered.”

And this shouldn’t shock anyone with a brain. China keeps threatening other countries as well, it’s time China is put in their place, bunch of demented little *****.

Well, we know for sure the liberal, socialist cowards in charge of our country today have no plans to put them in their place! 🙁

IT IS ESSENTIAL THAT THE INFORMATION IS EXPOSED IN THE WIDEST POSSIBLE WAY …
THE GOAL HAS TO BE TO GET CHINA TO HAVE A NEED TO DISCUSS.. REFUTE AND PROVIDE INFORMATION THAT CAN THAN BE TESTED.

I BELIEVE IT IS CLEAR THAT THEY — LET (CAUSED) IT TO BE CIRCULATED TO REDUCE THE IMPACT BEING SOLELY LIMITEDV TO CHINA.

THAT ASSUMES IT WAS AN ACCIDENTAL RELEASE … IF EVIDENCE SHOWS OTHERWISE … THE COUNTRIES OF THE WORLD MUST ELIMINATE THE CURRENT REGIME.

Trump did put China in their place. They are misbehaving now due to Biden’s weakness and they are testing him..Don’t worry. This can’t and won’t continue too much longer. The election fraud WILL be proven, but beyond that, are all the crimes against humanity committed for too long and the biggest one- COVID, PCR testing and this depopulation non vaccine. The CCP must be jumping for joy with the deaths from COVID and the upcoming ones that will occur from the vax.

From your lips to God’s ears, Sandra!

I have said from the beginning this was a bio weapon created by the Chinese Communist Party. The difference is I have from the beginning believed and voiced that the release of this SARS CO-2 was intended. All they had to do was infect a few Chinese from a non rural area knowing in would be spread then taken all over the world. They could care less about their average citizens as long as it was blocked from reaching the CCP leadership. They couldn’t care less if they killed a million Chinese, they have a billion or more.

Many believed this from the beginning. China is evil and does evil things. No surprise there. So what will the Biden administration do about this except absolutely nothing!

And there are plenty of evil people in our own country who don’t hesitate to do evil things, and are willing and anxious to play along with them!

“Accidental release” you say? I, for one, do not believe it was accidental! I believe it was intentional, and especially after seeing video of Mr. Falsey a while back, predicting before it was rained down on us, that President Trump would face the greatest pandemic the world had ever seen! Gee — wonder how he knew that?? I say it was intentional and Falsey and other liberals were complicit, in order to bring down the United States of America, and turn it into a socialist/communist country just like China! 🙁 Please God, do NOT let that happen to what has always been the greatest country in the world — please hear our prayer! 🙁

So, anyone still believe that this an accidental exposure to a bat sold in an open air market? Beijing