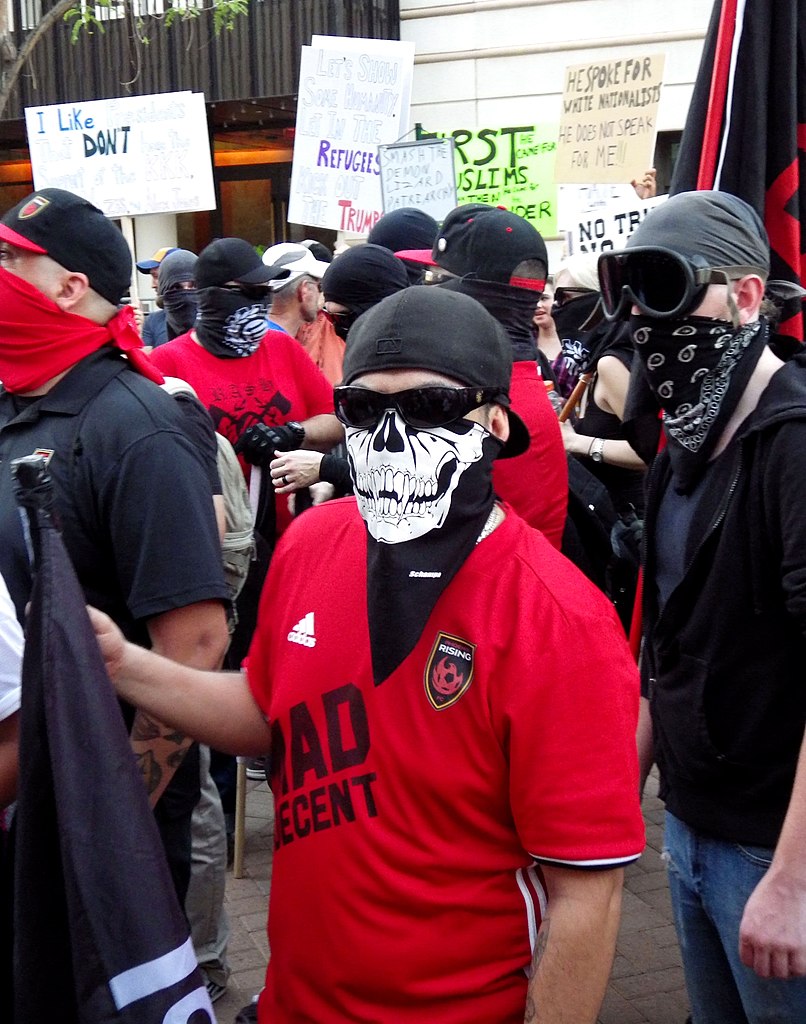 DOUBLE STANDARD? – The Biden Department of Justice (DOJ) has been zealously pursuing anyone remotely involved with the unarmed, half day riot at the Capitol on January 6. In many cases suspects were held without bond on minor charges as the Feds try to build stronger cases. While called a ‘deadly insurrection’ by partisans and the establishment media, only one unarmed rioter died as a result of the, at times, violent Capitol riot. One officer and three protesters outside the building died of natural causes or pre-existing conditions.

The riot was violent at times, and in places, and did injure over 100 Capitol Police and Metropolitan Police Department officers – but calling it a ‘deadly insurrection’ is beyond hyperbole. It is simply false.

Meanwhile, reports The Epoch Times (TET), according to court records, more than half of the cases against violent rioters in Portland Oregon from the summer, have been dismissed by federal prosecutors.  These mostly leftist rioters violently attacked local and federal police officers, City Hall, police stations, and federal buildings, including the federal courthouse – for weeks. Yet, different standards appear to prevail for them.

The paper noted that:

Of the 90 people who prosecutors said were charged between July and October of last year, 48 saw their charges dismissed at the request of the U.S. attorney’s office in Oregon. Prosecutors decided against pursuing charges that included assault of a federal officer, destruction of government property, and failure to obey a lawful order.

Another 32 defendants have had their arraignments or jury trials pushed back many multiple times. In a handful of cases, the next hearing has been delayed until 2022, as courts continue dealing with a backlog that accumulated during the COVID-19 pandemic. The majority of the group is free on bail.

Federal prosecutors decided to charge wrongdoers after Multnomah County District Attorney Mike Schmidt announced that his office wouldn’t prosecute some people arrested and charged during demonstrations. Schmidt rejected hundreds of cases brought to his office by October 2020, although county prosecutors are reviewing previously dismissed cases if the alleged criminals are arrested again.

Federal prosecutors acted last year because so many of the accused were released from jail just hours after being booked, Chris Van Wagner, a defense attorney in Wisconsin who was once a federal prosecutor in Madison, told The Epoch Times.

“They’d be arrested, they’d be booked, and they’d be immediately released. And they would be right back out there the next night, and whether you’d call them Antifa or hooligans or rioters or protesters doesn’t matter—they were able to return to the fray almost immediately,” he said.

Anyone charged with a federal crime can be held for up to approximately five days, sometimes longer.

The slew of dismissals appears to Van Wagner as “winnowing down the cases to those that were direct and serious threats to federal buildings,” such as people who were said to have carried out arson on federal buildings. Some of the cases that were dismissed deal with lower-level offenses. It’s possible the change in administrations played a role, he said.

Oddly, many of the charges were reportedly dropped by a Trump appointed prosecutor and his successor. However, Chad Wolf, acting secretary of the Department of Homeland Security during the Trump administration, told Fox News that he disagreed with the dismissals, stating: what has happened “is offensive to all the men and women who risked their lives in Portland for 90 to 120 days or even longer in some cases, being attacked night after night after night.” ADN

Biden and that nasty old w hore Harris are destroying this country, nothing but scum. Both of them need to be removed since they never actually won.

My only hope is that someday soon we get to see Biden under arrest. He has been getting away with all his dirty deeds for years now and I pray that it all comes crashing down on the dirt-bag real soon.

That’s why they still have the fence and the guard they know they are fraudulent and they are scared !!

The left cannot punish its Brown Shirts and have them remain loyal to the Party but otherss are fair game.

We may not be evolving into a banana republic as it appears we have already made it there under Beijing Briben’s regime!

I Really wish it had been the Violent Insurrection the Left is Calling it as then We’d be Minus a Few of the Corrupt Scum in the Capitol Building! Also Since when do You have an Insurrection WITHOUT a SINGLE FIREARM? Yeah Pretty much sums it Up No Insurrection just a Group of Mad People with a few hundred curious tagalongs Who were Let into the Building!

Wait until the next March on DC,this one WILL be ARMED,and let’s see what over 80 million Patriots do!

Who did the people on Jan 6th kill?

ALL OF THE SO CALLED MURDERS WERE lies FROM NANCY.. The only murder was an air force veteran shot to death outside of the Capital. She was on a window sill about to enter so she died outside the building. Nancy is protecting the KILLER COP. The other Capital police who died did so of natural causes. Including Sicknick who had a ruptured aneurysm and died.

WELL THE DOJ NEEDS ALL, TO BE FIRED IT LOOKS LIKE———— AND THE DIRTY FEDS NEED OT FIRED ALSO AND WE STAERT FRESH WITH HONEST MEN AND WOMEN. AND WHY HASN’T THE PEOPLE FROM JAN 6 BEEN SEEN BEFORE A JUDGE YET,. WHY HAVEN’T THEY HAD BAIL POSTED. WHY ARE THEY SETTING IN A JAIL CELL??????? WHAT IS THE REASON ——- WE THE PEOPLE WANT OT KNOW. WHAT GAMES ARE THE DOJ PLAYING??????

AKA Department of Injustice since the Barry Soetoro regime.

No justice for the “right”…lots of amnesty and freebies for the degenerate “left”…and the honest, Christian, conservative, hardworking, taxpaying LEGAL citizens are being literally “raped” in plain view – and that is the tip of the iceberg…these latter are already being referred to as “terrorists” by “el presidente”, his administration and the corrupt Main sewer Stream fake Media…think it cannot happen here…THINK AGAIN !!! The results of November 2020 fraud should have taught you something…

It seems that every Bureau in the Federal Government has been politicized into Marxism. Even A.G. Barr was writing Executive Orders for Biden while Trump was still in office and claiming “no Voter fraud that he could. see” He knew before the vote who would win albeit illegally and acted accordingly working for the faked winner before he even won.. It is not a swamp Washington D.C—. it is a Cesspool.

OH HERE WE GO LEAVE IT TO DIMWIT BIDEN TO DROP THE CHARGES ON ANTIFA., NOW I WONDER WHY HE DID THAT STUPID ACT. WHAT IS THAT HIS DARN BROWN SHIRT ARMY AGAINST THE AMERICAN PEOPLE.. HE IS CONSTANTLY SHOWING US HIS DIRTY COLORS.

I have ceased to trust the DOJ, FBI, CIA and any other agencies that have exhibited bias for one party over the other.

If they didn’t have double standards, they’d have NO standards at all!!!

Absolute disgrace! The DOJ are a joke! What part of corrupt do they not understand!

You’d think the LE would be a bit uncomfortable about allowing terrorists who have damaged cities with their rioting to keep walking the streets and then trying their hardest to make protesters at Capitol Hill be hung for their “crime” of actually protesting. Shame on LE.

No surprise here, Antifa, BLM and all dem militant groups are made of democrats sitting in office children and relatives, others ARE also working on the government as FBI, DOJ, Capitol police, Judges, or other dept police, staffers paid state and federal employees, they are not going to incriminate themselves.
Dem Senator and Hillary VP Tim Kaine son is Antifa leader, Woody Kaine.

Oh wake up people…this is no double standard…this IS the standard. For over a year the Main sewer Stream fake Media has literally bombarded the population with the full psychological aspect of the covid WAR. Fits in with what is being deemed the “Psychosis of Totalitarianism”…

The left is hypocritical, dishonest and corrupt. The capitol riot – an “armed insurrection”? A lie. While the Portland protesters had Molotov cocktails, lasers, concrete milkshakes and whatever else. And they did so for nights on end. How they can call this “the justice” dept.is disgusting. They have no idea what justice means.

This is a terrible way to show the American public that our government is on the side of truth, law & order, and justice.

Patriots don’t act disgusting, however, the two or more bus loads that were dropped off there were paid trouble makers dressed up like Trump supporters , and they were the ones that caused all the rioting! Trump had asked for extra police just in case, however, the governor there said, no. And of course Pelosi and Schumer played a huge part in making this into a nightmare for the deep state. The Democrats lie and cheat about everything.

They can’t very well prosecute their own employees can they?