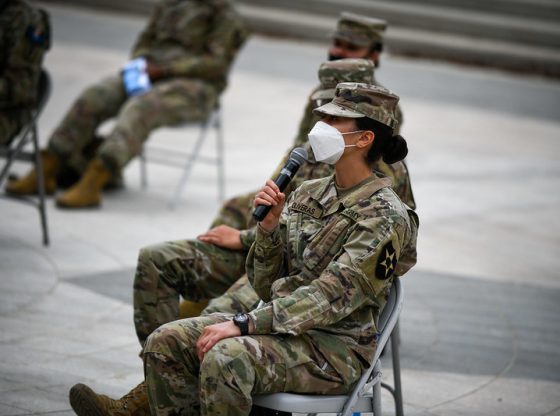 Today’s PDB Includes a variety of critical issues such as – Biden looking to establish a hotline with Beijing. China plays the victim card. Are more troops needed on NATO’s eastern flank? National security agencies warn of enemy threats to 5G. Afghans who helped Americans hope to avoid the Taliban and come to US.

Plus, nearly half of women soldiers are failing Army’s new Fitness Test.

Abandoned US military gear in Afghanistan sold as scrap

Nearly half of female soldiers still failing new Army fitness test, while males pass easily More than seven months after the official launch of the Army Combat Fitness Test, or ACFT, nearly half of female soldiers are still falling short, with enlisted women struggling the most, Military.com has learned. The data again raises questions about whether the Army’s attempt to create a fitter force is creating more barriers to success for women.

Thousands of Afghans who helped US want to evacuate before the Taliban finds them. Advocates are pushing the idea of evacuating thousands of Afghans to Guam or other safe locations, where officials could vet them for U.S. resettlement.

US military trashes unwanted gear in Afghanistan, sells as scrap. The twisted remains of several all-terrain vehicles leaned precariously inside Baba Mir’s sprawling scrapyard, alongside smashed shards that were once generators, tank tracks that have been dismantled into chunks of metal, and mountains of tents reduced to sliced up fabric.

Biden looks for defense hotline with China. The United States says it’s ready to call China in a crisis. Will Beijing pick up?

China, the victim? From behind the Great Wall is a government under siege by foreign threats. Activity by U.S. military ships and surveillance planes directed toward China has increased significantly under the Biden administration, a spokesperson for the Chinese Defense Ministry said April 29.

Romanian leader tells Biden more NATO troops needed in east. Romania’s president told U.S. counterpart Joe Biden on Monday that more NATO troops are needed on the alliance’s eastern flank given Russia actions that are perceived as threatening by many in the region.

The northern bear: How is the Kremlin getting along with its neighbors? China remains the biggest buyer of Russian weapons in Southeast Asia, but Moscow is increasing military ties with other countries.

Pentagon’s War on MAGA – Biden’s McCarthy-Like Purge of ‘Extremists’ – Led by Leftist Extremist
Wednesday PDB – When Will China Attack Taiwan? US, Japanese, and French Troops Train Jointly on Japanese Soil, US ICBM Decision Will Have Lasting Effects, Russia’s Threat to the Arctic

That half of all women are failing the fitness test is no surprise. Nature generally doesn’t build women for combat, and the fitness test is intended, correctly, to ensure that soldiers are capable of the rigors of combat, since that is their basic function. The military is not a jobs program to distribute more Federal tax money to women or others.

Tell us again how it is fair for a man to compete in women’s sports.

I’m sure the Democrats are working on this one; just hope there aren’t many fools who will believe them!.