Why is Big Tech Giant ‘LinkedIn’ Aggressively Censoring Any Criticism of China?

Why is Big Tech Giant ‘LinkedIn’ Aggressively Censoring Any Criticism of China? 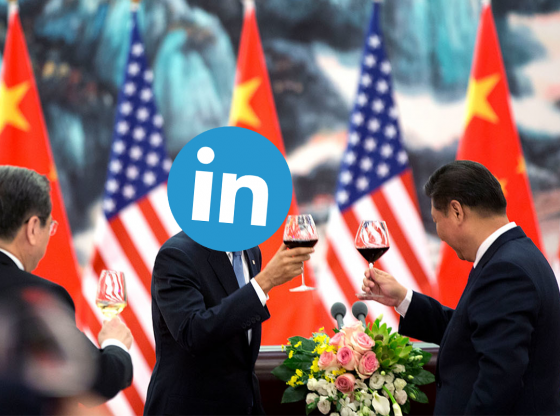 National Security Alert – Chinese Influence Over Big Tech – LinkedIn is the world’s largest professional network with 756 million members in more than 200 countries and territories worldwide, and the third largest social media giant. It is smaller in size than Facebook (at 2.75 billion members) or Instagram (at 1 billion), but far larger than the much younger (age 18-29) crowd at Twitter (340 million).

When it comes to influence though, LinkedIn, due to its professional and disproportionately leadership-oriented demographics, arguably has more influence than most.

Yet, it is generally ignored when analysts comment on Big Tech. Especially when it comes to censorship or foreign subversion.

It should not be. Especially since it may be penetrated by the Chinese Communist Party (CCP).

My recent experiences with LinkedIn, where I have been a paying ‘Premium’ member for many years, is horrific. As a national security professional, media entrepreneur, and journalist, my extensive international LinkedIn network consists mostly of public policy and security analysts, senior military members, and the media. My highly professional and well-sourced posts are likewise geared to my network.

And I had never before had any issues with LinkedIn.

However, beginning this year, LinkedIn suddenly became perhaps worse than all the other Big Tech firms with regards to censoring conservative views and purging members. But its bizarre obsession with aggressively purging and blocking any post or comment critical of communist China is particularly reprehensible and concerning.

I have had a post linked to reputable historical source discussing Mao’s nearly genocidal mass murders blocked. Other posts linked to a U.S. Senate report on Hunter Biden’s links to China were repeatedly blocked. Most concerning though, is LinkedIn’s apparent mission to repress ANY information that points to China’s links to the COVID-19 pandemic.

I have had multiple posts linked to credible and mainstream news reporting on China’s biowarfare programs or potential links to COVID-19 blocked. Such as this, or this. Most recently, their censorship extended to even totally disappearing the ‘offending posts’ citing Australian news reports of a leaked document/book where Chinese military scientists discuss weaponizing the SARs virus back in 2015. My article is linked here.

Normally when censoring, LinkedIn blocks viewing of the post to anyone but the individual who posted it, and then sends an email explaining their ‘justification.’ These range from the most generic ‘violations of policy,’ to labeling what they don’t like as ‘misinformation,’ to more recently calling them ‘scams or spam.’ Generally, they give you the opportunity to review your post and ‘Ask for a Second Look.’

I have challenged every single act of LinkedIn censorship, and won on several occasions, having my posts restored—albeit after having lost viewing momentum. But, now in its most recent attempts to censor my posts, by eliminating the post altogether, LinkedIn makes it much harder to contest their capricious or deliberate actions, and removes the evidence from the table.

See here LinkedIn’s most recent message blocking my post on China and showing how I can supposedly view the post at the ‘Ask for a Second Look.’ link. 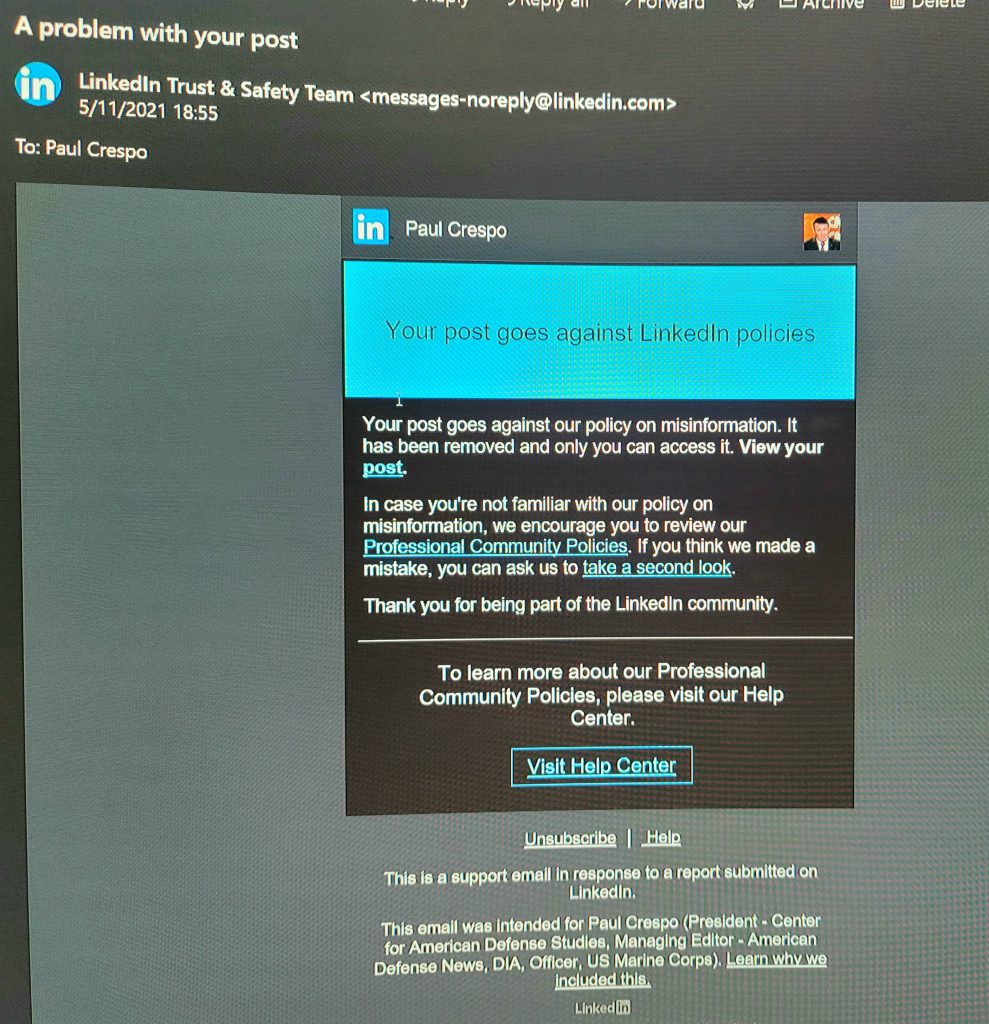 However, since the post has been ‘disappeared’ by LinkedIn, it no longer appears anywhere in my profile or feed. 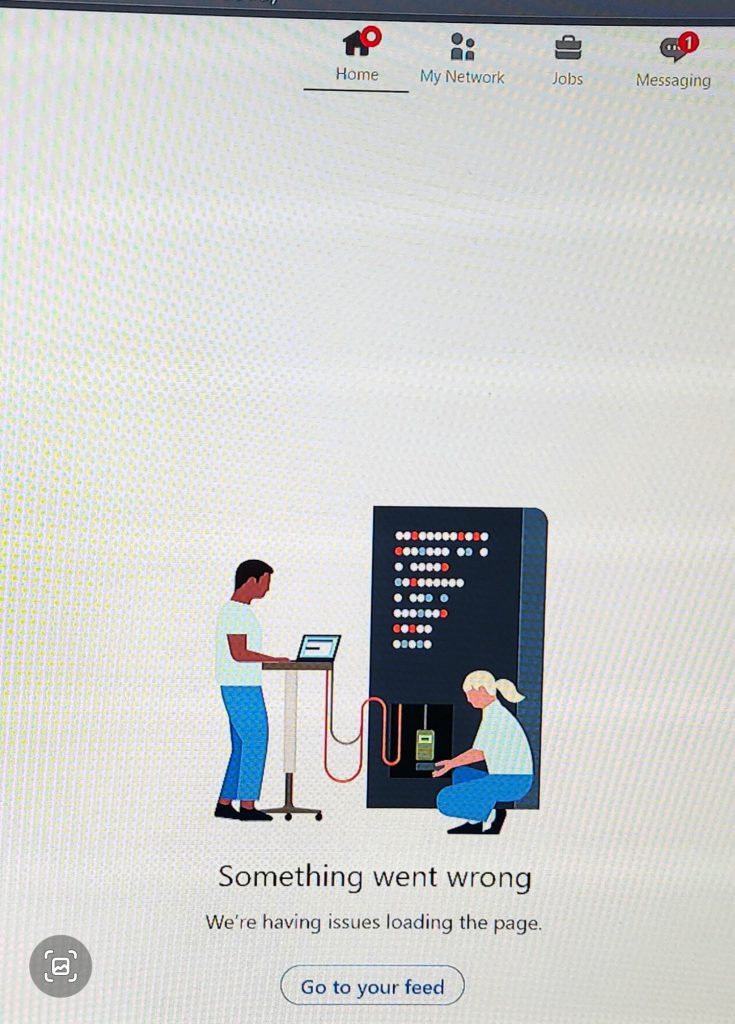 Am I alone in this censorship, and is it simply random algorithm-based folly? Absolutely not. A noted China expert, Pete Humphrey, recently had his comments blocked and then had his profile totally restricted at the apparent behest of CCP operatives in Beijing.

His crime? Factually, but critically commenting on the all-powerful China Global Television Network’s (CGTN) propaganda posts. Apparently, according to the LinkedIn commissars, a lone, elderly scholar can ‘bully and harass’ a colossal, state-run media powerhouse. After being released from two weeks in the LinkedIn ‘clink’ or jail, Humphrey posted about his harassment in a LinkedIn article titled: “Is LinkedIn China’s Censor?”

In his piece he notes that due to his publicized incident, he received highly disturbing information from sources within LinkedIn that said:

…LinkedIn’s so-called “localised China operation” was involved in executing the will of the CCP and CGTN in censoring me. Some years ago LinkedIn had caved in to CCP pressure to set up a “local operation” in China which would censor and filter content on the platform within China. Setting up this “local operation”, they said, was a quid pro quo for LI continuing to operate in China, unlike other western social media platforms who are blocked because they refused to collaborate with CCP censors.

But it’s not so “local”, these sources said. China has planted people working for the “China operation” on the staff in LinkedIn’s offices in America as well. There is sometimes a battle for control…

So, apparently China has infiltrated LinkedIn, and is trying to use its power and influence to censor any criticism, and purge critics. There is much more to the LinkedIn-China censorship scandal. Please stay tuned. ADN

Wednesday PDB – When Will China Attack Taiwan? US, Japanese, and French Troops Train Jointly on Japanese Soil, US ICBM Decision Will Have Lasting Effects, Russia’s Threat to the Arctic
Retired US Generals and Admirals Warn of Battle Between Marxism and Freedom

This happened with one of my links. Her post was deleted without even an email or statement of the reason behind deletion. No forum to apeal against provided to an 85k views post. She even received threatening ‘advices’ about her career from someone she did not know.

They are probably owned by China.

Don’t feel picked on, I have had at least Eleven Reply’s DUMPED by the Monitors of ELECTIONS. But, keep the “FAITH”, I am sure that OUR LORD is quietly working on the Problem. The MAGIC word is LOVE. It took me a very long time to realize that LOVE your Enemy really does work. I am not in any way trying to be a Smart Mouth. I am Positive of this and it also comes with one very GREAT PERK. Showing Love to the REAL Guilty in this case BLOWS THEIR BLOODY MINDS WAY OUT OF CONTROL. GOD BLESS AMERICA AND ALL HER FAITHFUL CITIZENS,,

BECASE they didn’t spend all that MONEY to have all their employee’s taught how to us CHOP STICKS for nothing. ” DING HOA” LOVE EVERYONE, it WILL make them think.

This is all normal censorship for LinkedIn. LinkedIn started removing posts about the fraudulent election, the federal reserve bank,the Rockefeller/gates plandemic, davos, Switzerland and the one world club there, the CFR, George soros, the bildeburgers, Obama’s, Bush family. Jesuits, global warming. Then during the fake election, LinkedIn completely removed me with no explanation or recourse. This site should be completely shut down for over the top censorship. Everything was fine before Bill gates purchased LinkedIn.

It is pretty clear why big tech is not wanting to see complaints about china. Like old Joe they are bedded and wedded to china. Traitors are the naming convention for old zuck and google, and the rest. I hate google these days, they try to prevent all reading about all of the social conflicts with the left. At 70plus I think I can decide for myself what I want to read. And too many lemmings of the DNC just to not believe it is being done. Stupid is what it amounts to.

This is even creepier – I sent a message (NOT a posting) critical of Kamala Harris to a connection on LinkedIn and received a message from LinkedIn that their website would not tolerate rude remarks! It wasn’t rude; it was just critical of her! They’re monitoring private messages too!

i gave up on linked in a long time ago. It is boring and a waste of valuable time and energy

You are not alone; I’ve been cut off for simply sharing someone else’s posts, and one comment I made about the source of the pandemic. I too was a premium paying subscriber and was both surprised and angered by their action.

[…] was a co-conspirator with CCP China and Big Media in this effort. On several occasions, my posts on LinkedIn referencing well-sourced credible, published venues discussing the possibility that COVID leaked […]

Hey I was laughed at, had Occam’s Razor leveled at me and other BS, not only from LI but even people I know! All because around April 2020 I said that COVID19 was a man made disease, possibly bio-weapon gone wrong, I lived and worked in Asia from the early 90s until 2004, quite familiar with the 1st bad attempt, SARS.

Nope, 3 times since January 2021… None from 2010 to 2021??? I have copies of every incident with every social media site I’ve had issues with, in my social media folder, they’ll become a day when they’ll be a lawyer from Smith, Smith and Smith on TV commercials saying “were you censored by FB, Twitter, YouTube, you may be entitled to a settlement {non-attorney, paid spokesman} in between Marie Osmond saying I’m fat and William Devane telling me that I need gold, except I need the paper first to get the gold!

Remember the old adage… Even the sun shines on a dog’s a** sometimes!