Home /Homeland Security, National Security, US Military/Retired US Generals and Admirals Warn of Battle Between Marxism and Freedom 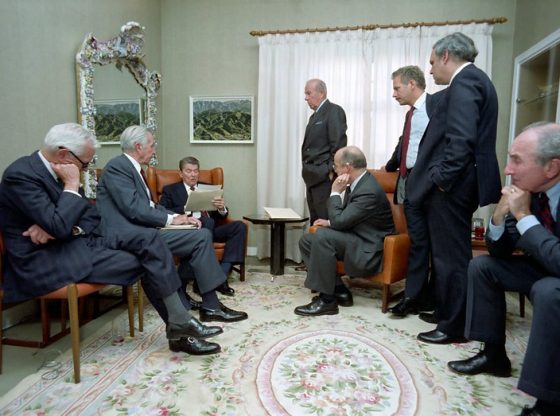 As President Biden politicizes the military under the guise of battling ‘extremism,’ too many of our senior military leadership has either rolled over or are staying mum. However, yesterday over 120 retired U.S. generals and admirals, including Don McGregor, Major General U.S. Air Force, Retired, and Senior Advisor to the Center for American Defense Studies (CADS), decided to speak up.

In a public letter, the large group called ‘Flag Officers for America’ wrote:

During the 2020 election an “Open Letter from Senior Military Leaders” was signed by 317 retired Generals and Admirals and it said the 2020 election could be the most important election since our country was founded. “With the Democrat Party welcoming Socialists and Marxists, our historic way of life is at stake.” Unfortunately, that statement’s truth was quickly revealed…

As a life-long freedom fighter and son of political exiles from communist Cuba, I can definitely agree with their statement and concerns.

The letter went on to discuss in detail the issue of ‘election integrity’ and 2020 election, which I would have preferred not to be included in such a statement, opening the group up to easy counterattack about spreading the so-called “Big Lie.” It then went on to bemoan the Biden administration’s Executive Orders and ‘authoritarian’ policies such as lockdowns, school, and business closures, and most critically, widespread censorship in America by progressive leftists.

All these issues are valid, but these distinguished officers were most effective, and relevant when sticking to national security. And here they hit some of Biden’s national security disasters in progress:

I would have preferred more about containing China, and maybe something about Biden’s reckless defense budget cuts. However, to me one of the most important issues brought up by these retired flag and general officers was the politicization, denigration, and subversion of our active and reserve military under Biden and the Democrats. The letter noted:

Using the U.S. military as political pawns with thousands of troops deployed around the U.S. Capitol Building, patrolling fences guarding against a non-existent threat, along with forcing Politically Correct policies like the divisive critical race theory into the military at the expense of the War Fighting Mission, seriously degrades readiness to fight and win our Nation’s wars, creating a major national security issue. We must support our Military and Vets; focus on war fighting, eliminate the corrosive infusion of Political Correctness into our military which damages morale and war fighting cohesion.

Of course, some former military officers criticized the letter. Retired Adm. Mike Mullen, former Chairman of the Joint Chiefs of Staff, said that the letter “hurts the military and by extension, it hurts the country” and said it contains GOP “talking points,” according to Politico.

Jim Golby, an expert in civil-military relations, called it a “shameful effort to use their rank and the military’s reputation for such a gross and blatant partisan attack,” while a retired Air Force colonel who teaches cadets at the Air Force Academy, Marybeth Ulrich, labeled it “anti-democratic.”

“That was way worse than I was expecting,” added Ulrich, who also teaches civil-military relations at the Army War College. “They are perpetuating the big lie about the election. I think it is outrageous. Some of it is very anti-democratic behavior.”

My question though, is where were these critics when retired Navy Adm. William McRaven accused Trump in 2019 of endangering the republic with his leadership. Or where were they when nearly 200 retired generals and admirals in an unprecedented partisan effort – ‘National Security Leaders for Biden’ – openly shilled for Joe Biden and against the sitting President Donald Trump; prompting Trump to respond with his own mega-list of supportive ex-generals and admirals.

Sadly, the Democrats politicized the ex-military then, and are politicizing the current military now. That should be their biggest concern. ADN

These admirals and generals have got it exactly right, this country has a bunch of Marxist and socialist people in Washington, and I believe that this is the most dangerous time since the founding of our country, if we don’t take a stand soon we will no longer be a constitutional republic, we must do whatever it takes to stay free.

i still have a problem as to why the hell is a communist in this country to begin with, much less involved in our politics??? What idiot allowed them in ?? They every one should have a bounty on their ass !!

Jack–go online and ask how many COMMUNISTS sit in the Senate and The House of Representatives. You may get a big surprise to see the entire Black Caucus are Communists and many who live on the Left and Right Coastal area and also Hawaii. Obama is also a card carrying Communist from the “NEW PARTY” of Chicago. Communism was outlawed in the USA in the late 1940s or early 50s by Congress.. Please tell me when that law was rescinded? I believe it to be on the books to this day but ignored as so many of our laws.

Joe Traitor is purchasing the demise of Israel and the USA with our Tax dollars. He must appease the Squats who have no LOYALTY to the USA what so ever…

The Marxist infection is deep and serious. If the country is to survive the Biden administration, two things MUST happen. First, the Republican Party must generate a backbone and fight like their lives are at stake -because they are. Second, the American military must become VERY vocal for upholding Constitutional values – no matter WHAT the idiot Biden or his followers say.

one bird two wings! NOT ALL BUT MOST REPUBS ARE JUST AS BAD AS THESE DEMORAT COMMIES! EVEN WORSE??? THE REPUBS, COMPARATIVELY, ARE COMPLACENT AND WEAK. Not all but most!

Dems. have always been the party of Social Malcontents and Misfits and Welfare Freebies!

The Muslim usurper purged the military of some of the most capable people and in their place he infested it with leftist rats. It has been downhill since then.

Dear Sirs, and Ladies, Why should we have to donate money to get politicians elected. You see where it got us. We already pay taxes. Thank You.

The 120 retired generals and admirals of the u.s. military could play an important role if really serious in reshaping the country’s political posture. Hope they are serious.

We need to fight the liberal,progressive,socialist,marxist,commie dumbocraps, that have lost their minds, and want to turn us into venezuela, with dementia,slo,joe at the helm,not just an embarrassment, but a danger to America and the world.

The Big Lie is “there was no election fraud”!

*WE THE PEOPLE NEED TO DEMAND CONGRESS IMPEACH BIDEN AND HARRIS!*

Step 5 in The Communist Manifesto by Karl Marx. Control the military.

Would someone just finally “formally” declare the we have a mass-oriented Marxist Insurgency and initiate appropropriate aggressive and effect counter-insurgency operations…..

Our institutions of indoctrination (universities) get a considerable amount of funding from China. Many universities have a hatred for America and only kind words for communist China. Is there any wonder why the leftists hate America so much?

The sad fact is that a some point as you move up the “Officer” ranks, you become a politician, more than a military person. And, the reality is that Politicians will say and do whatever to benefit themselves! Sadly, once you’ve relevant and you give that up when you retire, you yearn to be relevant again!
Enlisted NCOs know that being relevant last’s about 90 days after you leave! The first 30- you’re missed, the next 30 you’re blamed, and the last 30 you’re forgotten and life goes on! And, we’re OK with that! The majority of flag officers can’t let themselves be OK!

Jim Golby and Adm. Mike Mullen are a big part of this problem. Lets go out on a limb here. I bet both of these liars/corrupt ass wipes are dems. Hum, hey you guys how much of your wealth have you given to blm. You obviously must have given all your wealth because you support thier policies. No you are just more corrupt liars lining your pockets at the expense of the American public and traders (this anti 1st amendment will not allow the correct spelling of the word traders if you know what i mean) who need to be hung

another pretend to be conserative web site that does not allow free speech. you guys protect the constitution? what a joke

The money from the CCP is just too good to give up. The Biden Clan of Grifters has sold the USA out to the CCP of China. I never ever thought that Diversity aka LBGTQ. would be more desirable than Merit. Evidently Lloyd Austin has chosen the easy way out to force feeding Critical Race theory, and turning our great Military Protectors into the group who could not shoot straight. He has chosen Propaganda over Military Might. Must also teach the races to hate one another. Purging all Supporters of President Trump and conservatives as disloyal Austin is purging the Best of the Best from the Military just as Obama starved the Military of funds and necessary equipment–Austin is purging the best men no matter their color.

It’s clear the Left is trying to gain control of our military leadership y demonizing the Right. We should be wary of this a Senator in the 50$ said “They hire their own,” we can amend thatbysaying “They promote their own.”

When Jimmy Carter turned his back on the Shah of Iran the Mullahs executed his Generals. Don’t think it can’t happen here.