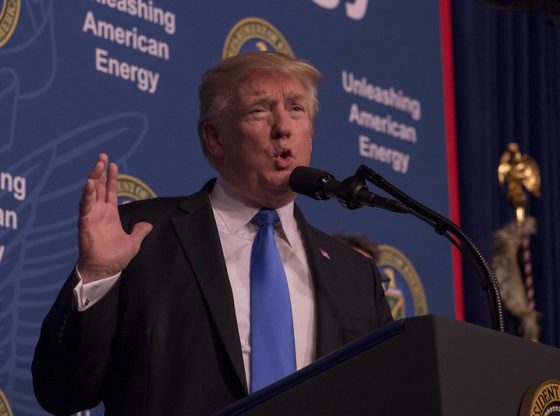 President Donald Trump give remarks at the Unleashing American Energy event at Energy Department headquarters. / US Department Of Energy

ANALYSIS – Echoing the exact argument I made the day after the Capitol riot, Christopher Miller, the acting defense secretary under President Trump during the January 6 Capitol uprising, told Congress on Wednesday that public “hysteria” over Trump’s plan to use troops to quell the violent riots at the White House in late May, factored into his decisions to deploy the Guard to the Capitol on January 6. This is precisely what I argued on January 7 in my piece ‘Media Furor Over Trump Using Troops at BLM White House Riots Likely Hampered Use of Guard for Capitol.’

This partisan and media-fueled hysteria, and later widespread reckless talk of a potential Trump military coup to overturn the results of the 2020 presidential election to keep Trump in office, deterred Miller from sending Guard troops more quickly to support the Capitol Police and DC’s Metropolitan Police on that day.

Miller’s testimony before Congress is the most detailed account of the Pentagon’s actions following accusations that officials were slow to call in the National Guard. He presented himself as a deliberate leader who was determined to limit the military role in any domestic disturbances. Miller said his view was shaped by the vociferous criticism of the aggressive federal law enforcement response by Trump to the BLM-led civil unrest that rocked American cities months earlier, as well as decades-old episodes that ended in violence.

Newsweek wrote that Miller, “fearful of amplifying those suspicions—as well as the chance that a soldier might be provoked into violence in a way that could be perceived as an attack on First Amendment activities—he says he agreed in the days before the insurrection to deploy soldiers only in areas away from the Capitol.”

The magazine added that he told members of the House Oversight Committee on Wednesday that the Defense Department has “an extremely poor record in supporting domestic law enforcement,” including during civil rights and anti-Vietnam War demonstrations in the 1960s and 1970s. Miller added:

And some 51 years ago, on May 4, 1970, Ohio National Guard troops fired at demonstrators at Kent State University and killed four American civilians. I was committed to avoiding repeating these scenarios.

And of significance, contradicting the multiple ‘Fact-Checkers,’ including at the Washington Post, who claimed otherwise, Miller also confirmed that Trump did in fact, suggest sending 10,000 troops to the Capitol ahead of the massive pro-Trump ‘Stop the Steal’ rallies. But those suggestions were never followed. And the establishment media has dutifully ignored this information as much as possible.

However, the Washington Post reported as opaquely as possible that:

In the full written statement Miller submitted to the committee, he detailed multiple conversations with Trump in the days before the riot. Trump, Miller said, indicated that the Pentagon should

The most in-depth reporting about what really happened on January 6 was done by Millenial Millie in her documentary, “Psy-op the Steal.” The occupation of the Capitol was planned by deep state actors employing advanced psychological and cybernetic warfare techniques developed by the U.S. military, ostensibly to be used against the people of Iraq and Afghanistan, but ultimately to be used against the people of every sovereign country (witness the worldwide application of election-rigging technologies by Scytl). The deep state put Barack Obama in the White House and immediately turned all of these evil techniques and technologies of domination against the people of the United States. The goal was to bring the United States to its knees and forcefully incorporate it into the New World Order, governed by the global capitalist class. I highly recommend watching Millenial Millie’s documentaries.

that sounds crazy enough to be true

Their was no “insurrection “! Look it up in your dictionary.

Incursion, yes. Insurrection, not even close.

Ah, yes, the Left uses language dishonestly, to manipulate. It is a technique, a subversive Leftist technique.

John Cooper, lead singer for the Christian rock band Skillet, just gave an interview in which he struggled to wrapped his head around this technique, so he could shine a light on the seductive, divisive, and destructive impact it is having on the Christian community.

“I think one of the difficult [issues] has to do with language and definition of terms. And so one of the things that was very hard for me in that 2013 and ’14 time was I would read things, and I’m like well the language kind of sounds right but there’s something off. It took me several years to realize that [the Left was] just changing definitions of terms. [They] might be talking about justice and I might be talking about justice but we might mean two very different things.”

Turn John Kerry over to Israel for espionage leaks to Iran.

but, but, but 80,000,000 + Americans voted for these frauds. (Biden and Kamala!) Where are they??? They seemed to have vanished into thin air or did they ever exist? Why don’t you see them all over the place like when they came out for President Trump? You be the judge! Hmmmmmm

I want to know who shot Ashli Babbitt. She was shot at point blank range in the side of the head, execution style. She was unarmed and posed a threat to no one. She was simply climbing through a window. That’s all she was doing. So why was she delivered a kill-shot to the head? She never even saw it coming. As if in a movie noir, her assassin stepped out of the shadows, or rather, just his arm did, and then disappeared back into the shadows as soon as he had fired his bullet into her head. WTF?