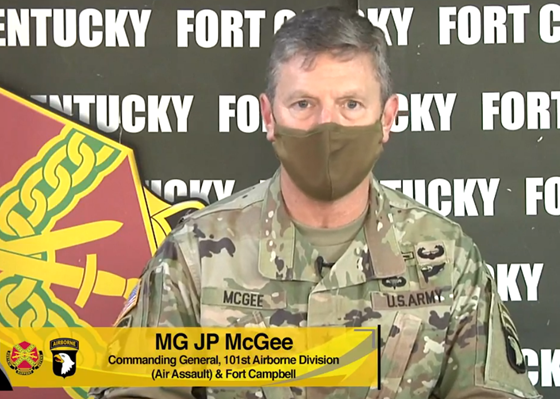 Commander’s COVID Overreach? – The Commanding General of the storied ‘Screaming Eagles’ 101st Air Assault Division at Ft Campbell, Kentucky, publicly stated two days ago that he would deny leave to soldiers who declined to get the COVID vaccine. Major General JP McGee also said he would consider other travel restrictions against non-complying soldiers. However, this appears to contravene a May 13 directive from the Office of Secretary of Defense (OSD) barring commanders from asking the vaccination status of his or her troops.

According to PopularMilitary.com, based on reporting from ClarksvilleNow, the commander’s staff are considering several penalties for non-compliance, including limited range of travel and increased reporting requirements for soldiers. The paper added that McGee claimed that those wishing to avoid the vaccine will encounter trouble and “should not consider things business as usual.” McGee went further, saying:

It would be irresponsible of me to allow soldiers to travel unvaccinated throughout the United States and bring that back and have an impact on our soldiers, their families and our overall operational readiness. I’m sure that’s not gonna be a popular decision for some, and that’s quite alright.

If you are a vaccinated soldier and you’ve received 2 vaccines, you’re at incredibly low risk of contracting the virus and bringing it back. You pose minimal to no risk. For them, they’ll be able take leave unhindered and with no additional requirements. For those soldiers that choose, as is their right, to not take the vaccine, we will prudently apply measures of how we will make sure you are able to travel safely.

General McGee may need to reconsider his words, since the commander’s guidance set by the Deputy Secretary of Defense in a May 13 Memorandum titled ‘Updated Mask Guidance for Vaccinated Persons‘ bars commanders from asking about soldiers’, or employees,’ vaccination status. This memo clearly states that:

Senior Pentagon sources told me that the General’s actions could merit an Inspector General (IG) complaint by anyone in the chain of command, if he doesn’t fall in line with the OSD directive. Others suggested that the Army should simply direct the general to abort his policy.

Yesterday’s Pentagon directive may also have been issued specifically because of the General’s earlier public statements. Either way, General McGee should probably reign in the COVID overreach. The boss at OSD appears to have spoken. ADN

This dumbass General McGee should not be over anyone, since he appears to be openly discriminating against people based on health information that he has no rights to have. He should face some serious consequences if he does try to discriminate against anyone based on their individual choices under the Constitution. This fool should be reminded that we don’t live in communist China.

Maybe McGee should be sent to Wuhan to head the *investigation .*

Somebody who has too high of opinion of his “command” power and should have several stars removed.

Fire his ass!! He won’t be fired because he’s a liberal and will probably be saved by biden.

The Div. C.O. is responsible for the combat effectiveness of his command. Stopping the spread of disease in barracks has been a command responsibility since before Napoleon’s time. The “Armchair Commandos” that want to fight against disease control and think they can run a division need to raise their right hands and enlist, work their way up the chain of command and demonstrate their management and leadership skills before second guessing the real pros.

Why not just isolate them on the return ?

Why not abide by the Pentagon ODS RULES?

The vaccines may shed the virus to others and the vaccinated may test positive for the Corona virus.

80% of Americans contracting Sars cov 2 will never show symptoms due to healthy immune systems. Understand this is 13% about herd immunity which is 67%

LISTEN UP….Give AMERICAN SOLDIERS a BREAK. THEY Have Been Thru ENOUGH HELL. BE HAPPY that THEY are SERVING the UNITED STATES of AMERICA. From SamuraiQueen. 😄😄😄

Soldiers. Are they the same as “employees “?

WELL I WOULD RATHER HAVE A LIVIING HEALTHY MILITARY GUY THEN ONE THAT IS RACKED WITH PAIN AND TEMP AND SUFFERING —– FOR A FIGHT THAT IS COMING FROM THAT BIOWEAPON OF A CHINES VIRUS. THINK ABOUT THAT YOU CHIEF GENERALS.

What you would rather has no bearing on their right to not take an experimental vaccine. Much like half of NIH and CDC employees. GO back in time a mere 45 years and a rushed vaccine killed and caused neurological damage to Americans.. Its called a free country, not an i get to tell you what to do country. USAF (retired)

Does this conform that the US Army is part of ?????

I have been reading Paul Crespo for some time and, after carefully considering what he says, have invariably agreed with him. In this case, I do not.

Firstly, the policy refers to “employees,” which in the proper context (which I do not have) may not be the same as “soldiers.”

But more importantly, it seems to me, soldiers should not have the option of deciding which vaccines they get and which vaccines they do not get (perhaps subject to an appeals process, which would allow individual soldiers to argue their individual medical status). The primary responsibility of commanders is to have an operational force. If a group of soldiers is allowed to decide they know better than the military command how best to maintain an operational force, then chaos will reign.

He should step down,

Yes from his high horse

All military must be vaccinated

With shots that don’t fit the medical definition of vaccine, and that there is no knowledge of what the long-term problems might be?
It is probably a far-fetched conspiracy theory, but what if it is part of a plot to reduce the world population? I’d rather only half the military be part of the experimental shots.

The other shots are actual vaccines that have been tested for years. Not something where they have no idea what the long-term problems might be. I’d rather 50% took the shots and 50% didn’t, that way we have at least half the military available.

I want our U.S. Military to be as healthy as possible. I support every effort that our commanders use to ensure that their troops are as deployable as possible. The covid vaccine has been tested to be safe.

…they just let you live your life

This general should be hung too…another idiot that cares about his wallet and not his command. He is also incredibly stupid and doesn’t have a clue about voruses, vaccines, testing, masks, hell science period. Oh not to mention anything related to drug approval…but then that drug approval has just weent down the drain. Where do we get these traitors, really stupid, armed forces leaders from. Damn we are below scrapping the bottom of te barrel we have to be getting them miles deep from a hole below the bottom.

McGee was a very unpopular commander from the start. A PC liberal that worshiped Obama and probably ran hos with Hunter and Jeffrey. I heard he was a real backdoor man.

I think that is stupid to try to force these soldiers to take shots they don’t want! If Biden doesn’t like it, he should move to China, and leave Americans free to choose what they feel is right for them.

Wonder IF he believes in the RACE THINKING OF THE SOCIAL COMMUNIST democrats?

Clear violation of the UCMJ, charge him appropriately.