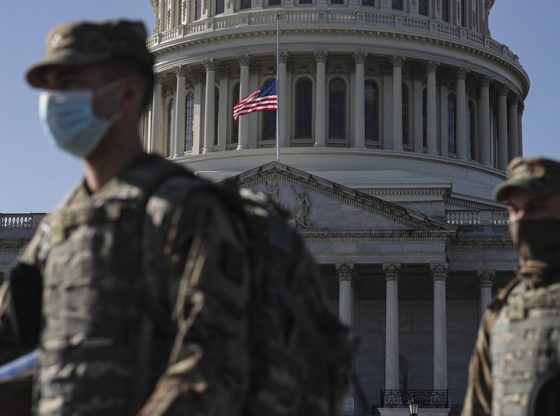 U.S. Soldiers with the New York National Guard arrive near the Capitol in Washington, D.C. / The National Guard via (https://creativecommons.org/licenses/by/2.0/) Flickr

Today’s PDB Includes a variety of critical issues such as – We should not underestimate China’s military ambitions. Are we in a US/West vs China Clash of Civilizations? Russia brands US as an ‘unfriendly’ country as Russian admiral talks of ‘provocative’ NATO drills. US and Greece deepen military ties in Eastern Mediterranean. US, Japanese and French troops training in Japan.

Biden’s overtures to Iran undercut US bid to end Hamas-Israel conflict, and likely fueled the attacks.

America’s return to ‘Clash of Civilizations’. Search the archives of any mainstream media outlet, and one will begin to turn up articles from the 1980s and 1990s eerily similar to modern day commentary on China.

Ex-Army Green Beret gets 15 years for Russian espionage. A former Army Green Beret who admitted divulging military secrets to Russia over a 15-year period was sentenced to more than 15 years in prison Friday on espionage charges.

We should not underestimate China’s military ambitions. Suggestions that the People’s Republic is a ‘paper dragon’ are ill-informed and misleading.

Japan, US, France hold military drill eyeing China presence. Dozens of Japanese, American and French troops landed amid pouring rain from a CH-47 transport helicopter onto a grassy field at a training area in southern Japan, part of Saturday’s joint scenario of defending a remote island from an enemy invasion.

US and Greece working on deal to expand military cooperation in the Mediterranean. The U.S. and Greece will likely update a bilateral security pact this summer in a move that could pave the way for more American military missions in the region, Greece’s defense chief has said.

Biden’s overtures to Iran undercut US bid to end Hamas-Israel conflict. With rockets flying and violence escalating in the Gaza Strip, the Biden administration announced Wednesday that it dispatched Deputy Assistant Secretary of State Hady Amr to the region, in an effort to broker calm between Israel and the terrorist group Hamas.

The problem is with Biden in office the USA will lose.

NOT IF WE DON’T GET CONTROL OF THE SENATE, CONGRESS, & THE HOUSE.

Biden has really got us in a mess. WAKE UP AMERICA. LET’S GET CONTROL OF THE HOUSE.

AMerica and the WORLD WAS GREAT when TRUMP was POTUS.
joke bidet and the squatters at the WH love genocide.

The United States of America exists in name only now. We stood by and did nothing as a hostile enemy and a treasonous political apparatus fraudulently siezed our country. Elections, the Constitution, “Democracy” are largely soporific at this point. The USA is now to the CCP what East Germany was to the Soviet Union… a puppet, vassal state. “The Clash of Civilizations” will have to be taken up by the People… our government are on their side.

As a nation for the most part we’ve left out God. 66 million abortions, a hedonistic culture of ease and material consumption. I believe God is angry with us and allowing all this dis – ease in our nation come upon us for our infidelity through weak human instruments.

Biden’s concern for his security and the security of the capitol, (not the city), while supporting the reduction and elimination of security for the average citizen says a lot about this man’s character, and it ain’t comforting.