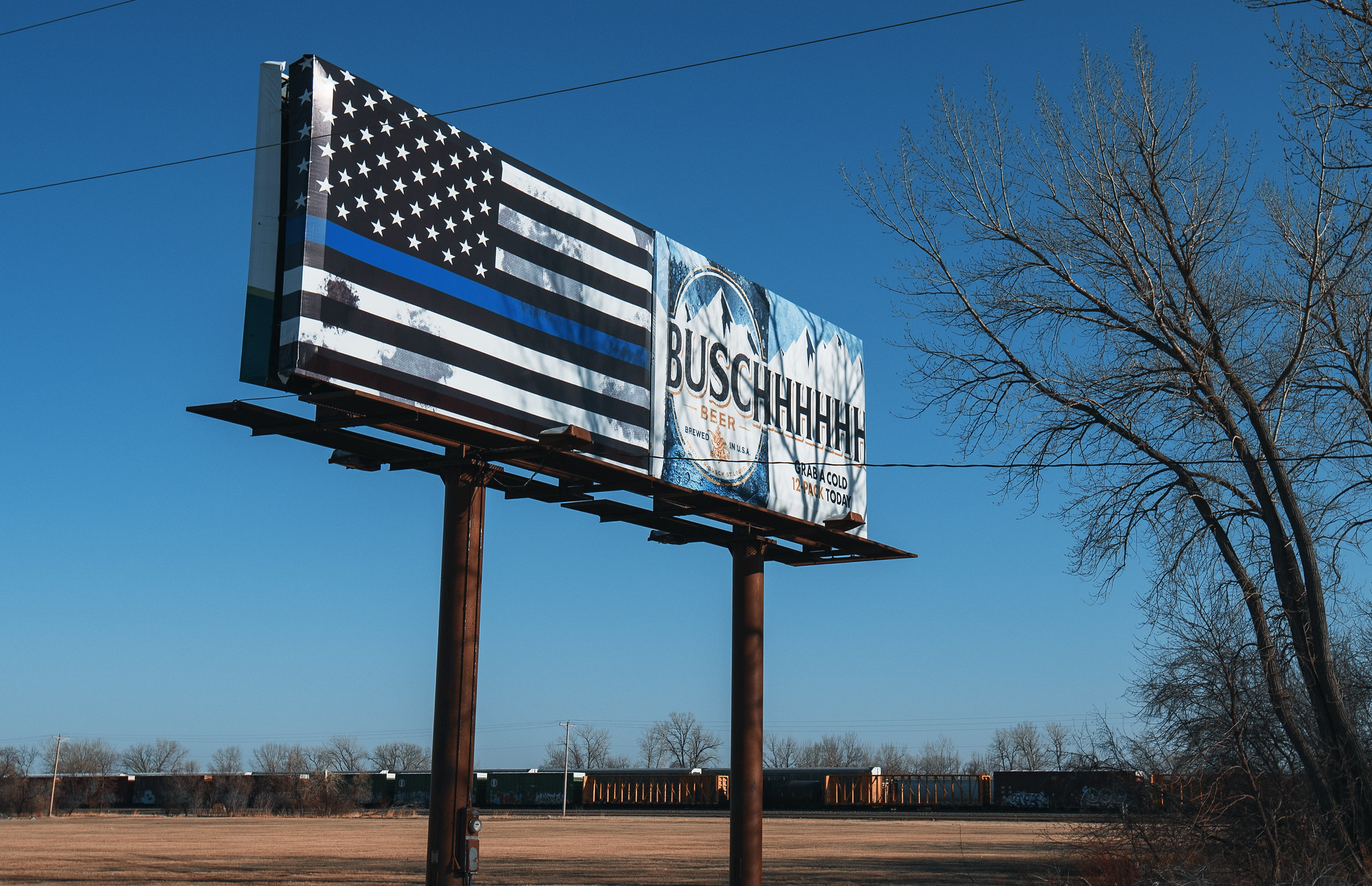 As the Pentagon is being criticized for becoming increasingly ‘woke’ or ‘leftist’ in its internal policies, the Air Force clamped down on security forces airmen for displaying the thin blue line flag at Ramstein Air Force base in Germany. While the Air Force said that these flags were prohibited by Department of Defense (DoD) policy, they weren’t officially ‘displayed’ on the base, but used by some airmen during a road march for law enforcement.

Still, the Pentagon created a new policy on flags last summer, under President Trump, allowing only specified flags. And this is how it is being enforced.

The issue arose last week when the 86th Airlift Wing posted, and later removed, photos on its Facebook page of airmen in uniform carrying a black-and-white American flag with a blue horizontal stripe during a 24-hour rucksack march as part of National Police Week, reported Military.com.

Woke critics quickly pounced, accusing the airmen of racism or promoting racist symbols.  While the “thin blue line” flag is used to show support for law enforcement, critics argue that because it has also been used by white supremacist groups and flown at far-right rallies, it is now unacceptable to display.

Military.com noted that the wing explained after the images were removed that the photos were shared in support of “our base Defenders” from multiple units who participated in the march. Additionally, base officials said that they were “only intended to show praise for their hard work and military service.”

“They were not making or endorsing any political statement or activity,” an 86th Airlift Wing statement said. However, the statement acknowledged the photos violated DoD policy “regarding the use of flags on military installations. For this, we take full responsibility.”

The new policy was enacted by Trump Defense Secretary Esper last year, in response to the Confederate flag controversy. It now says that “the flags we fly must accord with the military imperatives of good order and discipline, treating all our people with dignity and respect, and rejecting divisive symbols.”

So, now the American flag with a thin blue line used to support our nation’s police is considered a divisive symbol by DoD. ADN

And I put 20 years in the army for this. I sure wish Trump was back in office.

Thank you and God bless you for your service, Mike! I believe there are millions of us who stand with you on wishing our good President Trump was back in office. Right now, we have “squatters” occupying our White House, who neither belong there, nor have the first clue how to run a country! 🙁

Me too! America was so much better with Trump in the White House. Trump got things done and they were always for the good of America and not the dismantling Biden is doing day in and day out. Biden does not put America first but last and that is totally unacceptable.

I would LOVE to punch — whoever in the Military thinks that flag is offensive — right in the his arrogant nose for being the most IGNORANT and UNBELIEVABLE IDIOT IN THE MILITARY!! This is beyond ridiculous and if Americans ever want their Freedom and Country back from these FOOLS, you had better be ready to fight for it!

This is just the beginning of this take over and it’s going to get much uglier and more violent before it is over!

I would punch Him as hard as I can in His solar plex and while He is bent over with pain I would pick up his face and give him the riot act to his face .

The person that is responsible for this who is a Marist and a racist is none other than Lloyd Austin DHS Secretary of Defense.

These “woke” people disgust me, Connie! I think we need to put them back to “sleep” — what do you think? 🙁

This country is in serious Constitutional trouble. The present regime is doing everything they can to erase America as we know it and replacing it with a socialist state. Civil war is close at hand, our own Pentagon is turning on our armed service men and women, and any officers willing to stand against their wokeism. We are in serious trouble. Think a Red Dawn isn’t possible well think again. Young single military age men coming over the border in droves. Most are not even seen and the ones that are are just let in without any vetting whatsoever. How do any of us know that they aren’t military men in civilian clothes. Wake up you doddering old fool in the White House.

The Infiltration of Socialists and Marxists into the Nations Organizations and Departments is Rampant, and if True Americans don’t Rise Up Immediately to Put this Down it will be All Over for the Republic within a Very Very Short Time.

I’M REALLY GETTING SICK AND TIRED OF THE GOVERNMENT OF TELLING ME WHAT’S GOOD FOR ME….IT’S TIME WE TAKE BACK THE POWER BEFORE IT’S TO LATE ..

25 years in the USN and USAR, then another 20 years in the USCG Auxiliary and this is the state of affairs of the military. The left is about their mischief of destroying the military and purging its ranks of any but the acolytes that parrot the Party line.

This is exactly what Hitler and other despots have done in the past.

The Pentagon is not what it used to be or was meant to be. They’ve become too political to care about what they stand for. Or used to stand for.

The leftist communist argument that the “Thin Blue Line” flag is racist because someone may have waved it at a rally that the leftists consider to be an extremist gathering is completely bogus. They would be able to use the same bogus argument about the US flag and I imagine they probably will eventually.
The communists are out to destroy all traditional, cultural, historical, and religious symbols and our societal values. Then they plan to replace all these with their atheistic values, morality, and Marxist ideology; along with complete government control of the economy.

OMG, Our military has gone WOKE AND IT IS APPALLING AND DISGUSTING! WHAT THE HELL IS HAPPENING TO OUR COUNTRY? HAS EVERYONE AND EVERY GOVERNMENT ENITY GONE COMPLETELY INSANE? IT SURE LOOKS LIKE IT. HOW CAN WE TURN THIS AROUND? GET ALL THE DEMORATS OUT OF EVERY OFFICE ASAP.

Only one way that I see and it is to stock on food , ammo and weapons .Also many people need to research on making gunpowder and explosives . Stock up on a toys such as jacks and other things kids play with .

Jesus. I am afraid Biden will do so much damage by the midterms that we can’t recover.

The DemoCommunists need the US military to be purged and Woke so the military will have no problem when ordered against US citizens. Pretty simple…

Hoow damn stupid can our Government get! Oh that’s right, we are now run by a bunch of idiot Dumbocraps.

But the Biden administration has authorized U.S. embassies and consulates around the world to fly the LGBT “pride” flags.

Well,,,that’s sure to piss off the rag heads.

Republican’s like Pence who was VP support Trump, but didn’t care. Graham, McConnell, McCarthy are part of the swamp and want power and money. We’re in trouble and our Republic is i peril. The military has also fallen into the grasp of Socialist liberal Democratic Machine. Unless we fight for our country we have a chance to stop this cancer.

This is Bullshit. Our military took an Oath to protect and serve and died for our country and they have every right under the Consititution to keep that thin blue line. People need to rise up and hold these people responible for their action. I’m tired of the so-called woke society in our country that is trying to divide us.

Wow, this is a smack in the face to America, shows how much we need Donald J. Trump

This “WOKE” group needs to be looked at as the terrorist group it really is. You can not allow “wokeism and cancel culture” to continue unchecked. If the 80 to 90% of us that don’t want our history and/or lives cancelled don’t start standing up to this leftist liberal 10 to 20% of the population we will find ourselves facing full on communism and none of the constitution usable.

I thought the military was there to protect all even the law enforcement. Dems/Lib are going to push only so far, people are go so far. Oh that’s right conservatives are dangerous people.

I have made a number of opinions and posts and all seem to never show up or are posted. I was never surprised because I know yahoo is a left wing commie s///box and try to avoid using it. I just read news to judge the the general feelings of the users.

I bet they didn’t ban the rainbow flag!

Oh ye hypocrites and traitors, pentagon, to the oath you took and the American people.

Sadly with the help of their extreme left advisor Wienstein or whatever his name is, the Pentagon has become as left as the rest of the Presidential sicko. Also our military itself has become the same, sick. We won’t have a military capable of defending any nation let alone America. It is all going to come to a very ugly head before long.

Thanks Paul. Your daily insights give us hope these issues matter.

Well, I served my nation honorably in the US Forces and I sure as hell am glad that I didn’t have to swallow the load of horse manure the DC Scatocrats (Greek: look it up!) are defecating for the Pentagon today! These traitors have caved and sold out to the Marxists entirely. Forget defending the sacred Constitution! These Benedict Arnolds will have nothing to do with the sacred values of our Republic!

I can’t wait until DoD drums out all military members it deems politically “right of center.” Democrats have spent decades vilifying the military, and ensuring their kids never serve! Because, “Those who can’t, teach. Those who can’t teach, go in the military.“ I can’t fathom young, left wing, entitled Government-school-indoctrinated over-18s will run to the nearest recruiter to enlist. And if they do, I can’t wait until they don’t follow orders they don’t agree with. I’m so glad I’m retired!