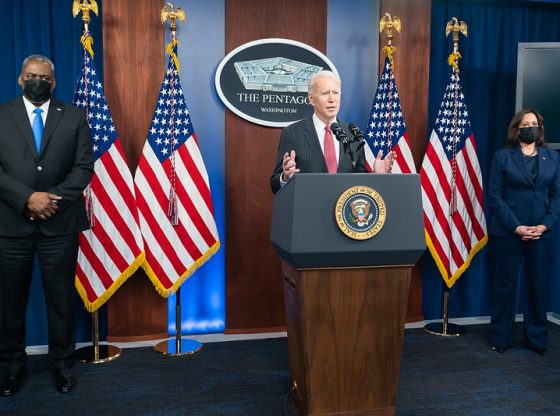 Today’s PDB Includes a variety of critical issues such as – Is Pentagon Spying on Troops? New world of special operations in tech and ‘cognitive warfare.’ Marine Commandant says competition not war with China.  Lawmakers concerned over Team Biden’s lack of urgency in protecting Afghan interests as US pulls out.

Plus, old Russian base in Arctic grows in importance.

Are fears of Taliban taking over Kabul overblown?

The Capitol Riot and US military.

Pentagon pushes back on report of anti-extremism social media surveillance program. The Defense Department is not planning to troll troops’ social media accounts for extremist activity, the Pentagon’s top spokesman told reporters on Tuesday, contrary to a Monday report about a pilot program to that effect.

What we know about the “unprecedented” U.S. Capitol riot arrests. At least 47 of those arrested are current or former military members.

Competition, not war, with China is the future, top Marine says. War with China is not inevitable, but it will take an all-of-government approach to deter it, Marine Corps Commandant Gen. David Berger said Tuesday.

Russia’s northernmost base projects its power across Arctic. During the Cold War, Russia’s Nagurskoye airbase was little more than a runway, a weather station and a communications outpost in the Franz Josef Land archipelago.

Lawmakers frustrated over White House’s ‘total lack’ of urgency in helping Afghan interpreters. Afghans who aided U.S. troops are in danger of being hunted down by the Taliban.

Fear of Taliban conquering Kabul are overblown, says US envoy to Afghanistan. Predictions that the Taliban will quickly overrun Afghan government forces and conquer Kabul once U.S. and coalition forces have fully withdrawn are unduly pessimistic, Washington’s special envoy to Afghanistan said Tuesday.

Army tries out Humvee-mounted howitzer. The Army is checking out two sizes of a unique low-recoil howitzer system: a 155mm gun on a 6×6 truck, Brutus, and a 105mm on a 4×4 Humvee, Hawkeye. That’s an extraordinarily small vehicle to mount an artillery piece, and reducing recoil is the key to making it work

Commander sees new era of ‘cognitive conflict’ for special operators. The withdrawal of the U.S. military from Afghanistan later this year will mark the beginning of a new era for Special Operations Forces.

Special operators deploying to US tech hubs. U.S. Special Operations Forces are used to deploying to warzones like Afghanistan and other austere and dangerous regions of the world. Now, some are being sent to innovation hubs in the United States.

It’s pretty bad when joe’s administration has to Spie on its own people . Joe and the democrats know they didn’t win the last Election and they are going to find out in 2022.

Don’t balk now we need to censor all politicians that are against America Trump policies. Democrats are destroying America we need to stop them soon. Judicial system is compromised, Democrats changing our military, inflation is coming sooner, diversion is how Democrats are doing this.

In my opinion, Biden is becoming a 2nd Hitler! Watch out, people. I’ve read that he has arrested men from 1/6 riot and started a violent gulag. One man was hit over his head so badly that his head is cracked and he is blind in one eye! Biden may be brain dead, but he’s also paranoid. Is his guilty conscience surfacing so he doesn’t truat anyone?

“National Guard Needs a Break”. WHY, from what?? How long have they been there?? Who is shooting at them?? Using IEDs against them?? I would say send them to Afghanistan, but we use REAL troops there.