Info Warfare – CCP China Bullies and Threatens its Neighbors, Then Gaslights US Navy for Freedom Ops

Home /China Threat, US Military/Info Warfare – CCP China Bullies and Threatens its Neighbors, Then Gaslights US Navy for Freedom Ops

Info Warfare – CCP China Bullies and Threatens its Neighbors, Then Gaslights US Navy for Freedom Ops 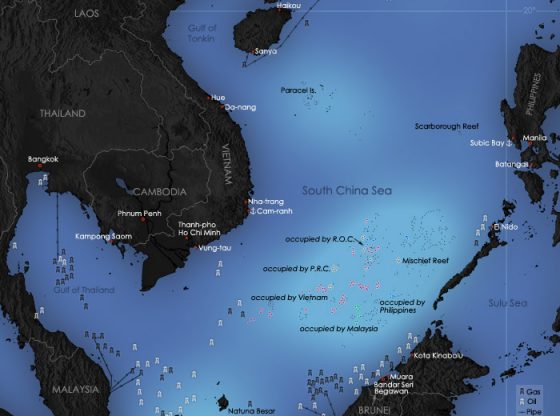 In the ongoing Gray Zone conflict in the South China Sea, CCP China gaslights the U.S. Navy for its legitimate and legal freedom of navigation operations (FONOPS) in the region, even as it bullies and threatens its neighbors. Despite increasingly belligerent military invasion drills near Taiwan, near daily aerial penetration of Taiwan’s Air Defense Identification Zone (ADIZ) and armed patrols in and around islands belonging to smaller neighbors such as Vietnam and Japan, the Chinese Communist Party (CCP) and People’s Liberation Army (PLA) deflect and gaslights the U.S. for supporting its allies, freedom of the seas, and the rule of law.

As Defense One noted in its D-Brief:

China protested twice this week when a U.S. Navy destroyer sailed through the Taiwan Strait and the South China Sea on Tuesday and Thursday, respectively. The crew of the USS Curtis Wilber (DDG 54) made the trips, which the Navy said, “demonstrates the U.S. commitment to a free and open Indo-Pacific.”

China’s military claimed the Wilber’s Strait passage sent the “wrong signalsto the ‘Taiwan independence’ forces, deliberately disrupting and sabotaging the regional situation and endangering peace and stability across the Taiwan Strait,” according to ABC News.

DDG 54 then sailed near the Paracel Islands,which are claimed by both Vietnam and China. A Chinese military spokesman said Thursday that the Wilber’s passage near the Paracels “violates international law and basic norms of international relations, increases regional security risks,” as well as “misunderstandings, misjudgments, and accidents at sea,” CNN reports.

Reax from America’s 7th Fleet: “Unlawful and sweeping maritime claims in the South China Sea pose a serious threat to the freedom of the seas, including the freedoms of navigation and overflight, free trade and unimpeded commerce, and freedom of economic opportunity for South China Sea littoral nations,” Navy spokesperson Lt., J.G. Nicholas Lingo said in a statement. A bit more at CNN.

I hope the Navy, if it awake and not woke, tells China to screw.

China can go to Hell ! They produced a killer virus and turned it loose on the World !
They will not admit to it and take the blame !
I say no one ows China a dime after all of this Covid crap !

like carter, obiden will suffer a military defeat, & perhaps then the light will come on for our clueless citizenry