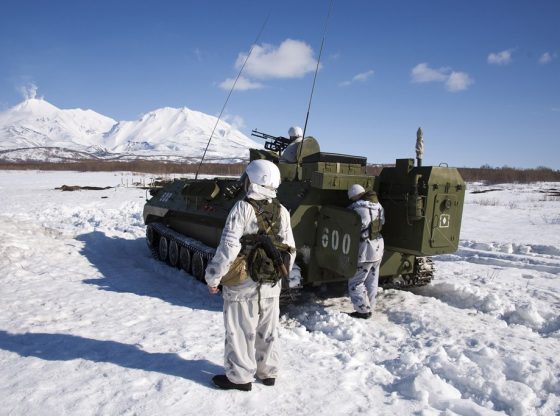 Ministry of Defence of the Russian Federation via (https://creativecommons.org/licenses/by/4.0/deed.en) Flickr

The melting Arctic has become a critical new battleground for the U.S., Russia, and NATO, with China also laying the absurd claim to being a ‘near Arctic state.’ With its massive undersea resources, and newly opening trade and attack routes, the Arctic could be a decisive domain in any future conflict. However, while everyone says the Great White North shouldn’t be militarized, it already is.

And the tensions that this reality is creating is clear.

As I have noted in several pieces, here and here, Russia is massively bulking up its military presence in the Arctic. “It has reopened abandoned Soviet-era military installations, built new military bases and icebreakers, increased troop presence and military drills, and established advanced radar stations in its territory above the Arctic Circle.”

I also quoted Russia analyst Patricia Shouker, who said in The National Interest, that Russia has one ambition: “to reconquer the Arctic.” As part of this goal, the Russian Ministry of Defense in 2019 stood up its first “unified strategic command of the North.”

The U.S. and NATO have responded in kind, as I have also reported here and here – and Russia isn’t happy. And the tension was obvious during the recent Arctic Council meeting in Reykjavik, Iceland. The Council bills itself as “the leading intergovernmental forum promoting cooperation in the Arctic.”

It consists of the eight nations that directly border the Arctic: Canada, Denmark (Via Greenland), Finland, Iceland, Norway, Sweden, Russia and the United States. The majority, except for Russia, are NATO members or NATO affiliated.

An icy meeting. [Secretary of State Antony] Blinken met with Russian Foreign Minister Sergey Lavrov on the sidelines of an Arctic Council meeting in Reykjavik, Iceland, on Wednesday. Reading between the lines of anodyne State Department meeting readouts, they exchanged some tense words behind the scenes on a range of thorny issues.

First, Norway is moving forward with plans to allow the United States to build its own facilities on several key Norwegian military bases, as Reuters reported this week.

Second, a U.S. submarine, the nuclear-powered Virginia-class USS New Mexico, docked in the Norwegian port of Tromso earlier this month—something that Russia isn’t too pleased about even as it bulks up its own Northern Fleet.

Third, the U.S. military and its NATO allies are increasing military exercises in the region. This month, 10 countries, including the United States, are sending ships and aircraft to the North Atlantic in Exercise Formidable Shield (NATO always comes up with the loveliest exercise names) for live-fire drills aimed at stress-testing air and missile defenses.

Squaring the circle. While Blinken is cautioning against military buildups in the Arctic, the U.S. armed forces appear to be doing the opposite. Hypocrisy? It depends on who you ask. Top Russian officials certainly think so. But some Western experts say no: None of these moves or military exercises are aimed at threatening Russia in any offensive way, but simply bulking up deterrence and dusting off the Cold War-era cobwebs on militaries practicing operating in the North Atlantic. A gentle reminder of deterrence, if you will.

Others say even if Blinken is urging countries to avoid militarizing the Arctic, the cat’s already out of the bag. “It is militarized, now we have to address it.”

The CCP Isn’t ‘China’ – So Let’s Stop Calling It That
Friday PDB – Taliban May Grab US Military Gear, Holding Russia at Bay in Arctic and Balkans, Why Does China Want a Military Base on Atlantic Coast of Africa? DoD Needs to Plan for Getting ‘Punched in the Mouth’

Don’t worry. I’m sure our Marxists usurpers are on top of this. Oh wait, Dementia Joe just shut down our oil pipelines so Russia can open theirs and have plenty of money to kick our butts with.

In 4 months and doing his best to start the FINAL WORLD WAR – nice going idiot!

Joe’s not intelligent enough to be called an idiot. That’s an insult to idiots.

Hey agiletz, might be too late for all of us, Earth Inhabitants. If Bastard Biden keeps up, all of our Enemies will Attack, and start WW-3 and it will be over for all of us Earthlings.SO-SAD AMERICA HAS COME TO THIS. TRUMP WE NEED YOU NOW- ASAP BOBBY ~!~

Arctic… North? Biden will appoint Harris Czar of this mess too and Harris might actually go there since it’s not South…. Well maybe not, Harris response on every job her “Boss” has given her quote: “Ain’t Happening!” giggle… giggle… cackle….

Are you sure Pres., oops, VP Harris knows which direction is South or North, East or West?
😉

Referring to the “Great White North” sounds like something “progressives” will damn as “racist.”