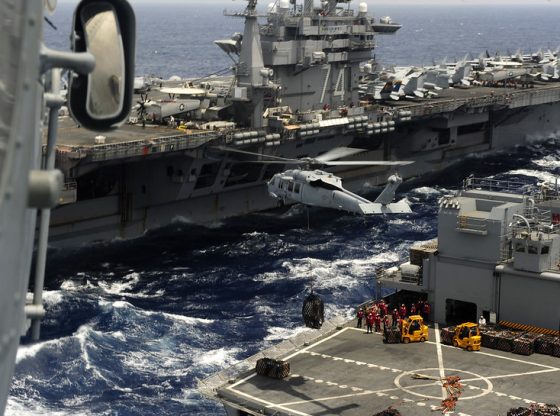 Today’s PDB includes a variety of critical issues such as – Does the US need a new regional combatant command for the Arctic? The National Guard mission to protect the Capitol is ending. Army Generals not ready for the future. Biden’s Afghanistan withdrawal plan is absolutely, positively ‘unclear.’ Navy’s massive exercise will have 25,000 personnel operating across 17 time zones.

Plus, are Russians targeting US personnel with directed energy weapons?

Japan’s backwards island defense strategy against China is a mistake.

Conservatives lash out at the military over ‘woke’ policies.

Back to Iran’s nuclear future as Biden barrels toward a repeat of the failed Obama deal.

Air Force inspector general takes over review of fired Space Force commander’s speech. The Air Force Inspector General will take over an ongoing investigation into the conduct of Lt. Col. Matthew Lohmeier, a Space Force officer who was fired last week after publicly criticizing the Pentagon’s diversity push and what he believes is Marxism spreading in the ranks.

Conservatives lash out at the military over ‘woke’ policies. Fox News host Tucker Carlson accused the Pentagon of caring more about hiring pregnant pilots than defending the United States. Sen. Ted Cruz said the left is trying to turn the military into “pansies.” And the Army was forced to disable comments on a series of new recruiting ads after criticism that the service has become too “woke.”

National Guard mission to provide security ending at Capitol. Nearly five months after being deployed to the U.S. Capitol to help quell the Jan. 6 riot, National Guard troops were set to leave and turn over security of the area to Capitol Police.

Army generals are not prepared for the future. Service leaders love to tout innovation, but can they make the changes necessary to succeed?

The Navy has a new ocean to worry about, it’s not clear how it’s going to deal with it, top lawmaker says. As Defense Secretary Lloyd Austin reviews the US military’s footprint across the globe, one top lawmaker is questioning whether a new combatant commander is needed to meet growing threats from Russia and China in the increasingly accessible Arctic.

‘Unclear’ – Explainer: Much about US withdrawal from Afghanistan is unclear. When he pulled the plug on the American war in Afghanistan, President Joe Biden said the reasons for staying, 10 years after the death of al-Qaeda leader Osama bin Laden, had become “increasingly unclear.” Now that a final departure is in sight, questions about clarity have shifted to Biden’s post-withdrawal plan.

Growing mystery of suspected energy attacks on US personnel draws concern. The Biden administration is facing new pressure to resolve a mystery that has vexed its predecessors: Is an adversary using a microwave or radio wave weapon to attack the brains of U.S. diplomats, spies and military personnel?

CENTCOM commander: As US scales back in Mideast, China may [FOR SURE] step in. As the United States scales back its military presence across the Middle East to focus on great power competition with China and Russia, it risks giving those two countries a chance to fill the gap and expand their influence around the Gulf, the top U.S. commander for the region said Sunday.

Japan’s backwards island defense strategy against China is a mistake. Japan may be coming at the problem of defending its southwestern islands backward.

Back to Iran’s nuclear future. The U.S. barrels toward a repeat of the Obama deal despite no inspector access to crucial sites.

New deployments for reservists, focus on Latin America come with 3-star Marine South command. Marine Corps Forces South has a new commander — this time a three-star general, up from a one star, signaling a greater priority on U.S. Southern Command and new mission opportunities for Marine reservists.

F-16s could still be flying into the 2070s. Based on Lockheed Martin’s backlog of F-16 orders, planned upgrades, and the recent revelation that the Air Force plans to depend on the fighter into the late 2030s, the F-16’s sunset years now could come in the 2070s, or later.

Hidenbiden can not be allowed to re=join the failed iran deal, no matter what, if the repukes don’t stop this, the next we know they will nuke us. Wise up, hidenbiden is mentally challenged for making any life or death decisions for America.He needs to be removed from office for total incompetence.

That is the aim of the US Democrats—to weaken the citizenry, including the military, so that we can be overtaken by China.

If this continues, we’ll see very few patriotic veterans in the democrat party.

The people of the U.S.need to understand that our current Democratic government is being run by Socialists, liars, fake newscasters, and extremely wealthy people. I am ready for these folk to go play in someone else’s piece of the planet. The USA does not need any guidance from these “so called” intelligent and wealthy people. Take a look at Canada people and you will understand completely why the majority of people in the USA neither want, need, or desire to have more thieves, liars, or crazy people moving into the USA.
Stop electing to the U.S. House and Senate these foreign people who did not grow up here, who want to change our government, and adopt the type government they had before they moved here. Biden has some mental issues, his VP is a tad lacking in work ethic and does not appreciate what a great country we have so fire her too. Set term limits for the U.S. Congress … or you will find your country totally destroyed by these so called lunatic office holders.

Joe is LOST in his own mind he doesn’t know what Day it is. So how can he run the Country.

LISTEN UP…GOD Will DESTROY the TERRORISTS. GOD Will FIGHT for ISRAEL.GOD Has REINFORCEMENTS and THEY are NOT ANGELS. A Thorough INVESTIGATION Has to Be DONE on WHAT HARMED the PEOPLE in WASH DC.SOMEONE is USING aNEW KIND of WEAPON. That is ALL that Has Been REVEALED to ME. The US. GOVT Needs to DO UNDERCOVER WORK ASAP. From SamuraiQueen 😄😄😄

No, the military isn’t loosing it the so called president hasn’t got a brain!