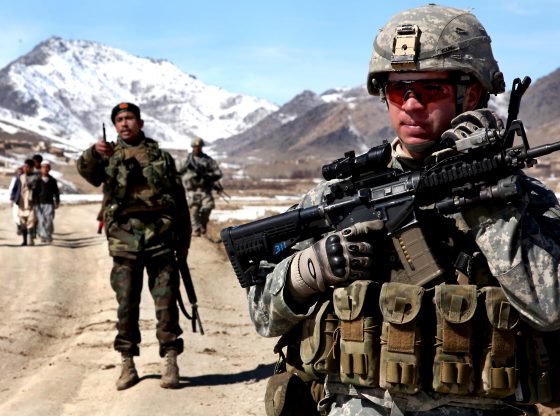 The partnership between U.S. and Afghan soldiers is proving to be a valuable tool in bringing security to the area. The U.S. Soldiers are assigned to Company A, 1st Battalion, 503rd Infantry Regiment, 173rd Airborne Brigade Combat Team. U.S. Army photo by Sgt. Russell Gilchrest. / Photo via (https://creativecommons.org/licenses/by/2.0/) Flickr

The idea to replace Air Force fitness test with monthly standards popular on the service website.

Plus, Australia reviews China port lease near a US military outpost.

And the new Pentagon background investigation initiative will include everyone by the end of 2023.

Idea to replace Air Force fitness test with monthly standards popular on service website. A recommendation to eliminate the Air Force physical fitness test has shot to the top of the rankings on the service’s main idea submission platform.

Pentagon considering telling troops to report suspected ‘Havana Syndrome’ incidents. The Pentagon is drafting a memo to the entire military and civilian workforce asking personnel to report any so-called anomalous health symptoms that might indicate they have been victims of a mysterious illness that has struck U.S. diplomats, spies, and military personnel around the world, according to two defense officials.

New background investigation initiative will include everyone by end of 2023. The Defense Counterintelligence and Security Agency’s new program for continuously monitoring individuals with security clearances, Trusted Workforce 2.0, should have all agencies and contractors onboarded by the end of 2023.

Pentagon accelerates withdrawal from Afghanistan. American troops are set to be out by early to mid-July, well ahead of President Biden’s Sept. 11 deadline, even as big issues remain unresolved.

Australia reviews China port lease near US military outpost. China’s Landbridge dismisses national-security concerns, saying its investment in Darwin Port is commercial and threatens a lawsuit if the lease is terminated.

Canadian soldier charged with mutiny for anti-vaccine speech. It appears to be the first mutiny charge laid against a military officer in more than 80 years in Canada.

Operations in Ukraine, other countries help U.S. Army develop cyber teams. As the Army builds its cyber and electromagnetic spectrum forces and capabilities, it has leaned heavily on lessons from operations in Ukraine and other theaters.

Biden budget to seek boost to the military’s cyber force. If approved by Congress, the move would mark the first expansion of the Cyber Mission Force since its structure was set in 2012.

Democrap sleepy Joe Biden has been wrong for 47 years!

im concerned that bidens ignorance & stupidity will get us in a major war with russia or china, they dont have a sense of humor.

Ignorance & stupidity is perfect description of Biden/Harris and it is frightening to watch what they are doing to our country. WE need a do over election that is fair. This last one was anything but a fair election. Biden himself told us he had the most extensive fraud ever in U.S history set up which is why he never left his basement.

US skips out one door, taliban comes in the next door!