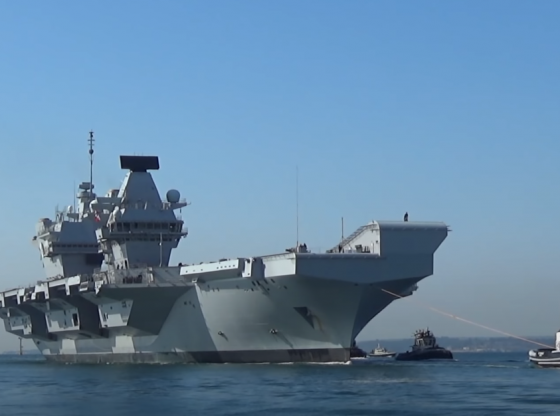 As I reported earlier, Great Britain’s state of the art flagship aircraft carrier – the HMS Queen Elizabeth (affectionately known as ‘Big Lizzy’) – deployed earlier in May on its first operational mission and is headed for the Western Pacific. Big Lizzy forms the centerpiece of a unique, integrated international carrier task force that includes, as I noted separately, a U.S. destroyer and Royal Dutch Navy frigate.

Even more unique is the composition of the carrier’s air ‘squadron’ of F-35B vertical/short take off and landing (V/STOL) stealth jet fighters. A ten plane ‘Joint Strike Fighter Detachment’ from the U.S. Marines joins eight F-35Bs from the UK’s No. 617 Squadron – ‘The Dambusters’ – to form what is being called “the largest concentration of maritime and air power to leave the UK in a generation.”

Deployed aboard the ship for an expected seven-month deployment, the commander of the Marine F-35B detachment had high praise for the Royal Navy’s newest aircraft carrier.

Colonel Simon Doran, the senior US officer aboard the Queen Elizabeth, told The News on Saturday as the massive, 65,000 ton ship departed Portsmouth in southern England, ” Being on a British carrier like HMS Queen Elizabeth is extremely nice. Don’t tell anybody back home, but it is probably the nicest ship I have been on.”

The Big Lizzy is the only ship in the world designed specifically to operate the new F-35 stealth jet. Col Doran added that based on the time onboard preparing for the deployment the US Marine Corps pilots and aircrew had already fallen in love with the ship – and were eager to take to the skies from its flight deck on operations.

‘They love it, it’s a very, very large flight deck and it is enjoyable to operate from a ship that was designed from the ground up to operate the F-35,’ he said. And he added:

I think it brings something unique and new to our operational environment that we’re all going to learn from and I think we’re really going to enjoy this deployment and the lessons we’re going to bring back from this.

Doran told the BBC that the deployment has been in the works for more than a decade. “It sends a message to potential adversaries, but also to our allies to reinforce should they ever be needed, we will be there,” he said.

Royal Navy Commodore Steve Moorhouse wrote in a message to the carrier strike group that the crews were ready to represent NATO “on the global stage.” ADN

To heck with NATO . But we need to be ready as the 3rd world countries & China & Russia are going down the path. by all the dirty tricks they have pulled & many in the USA congress are too stupid to see it.

Do you really believe that?

Congress is half stupid and half are aware. The stupid ones are on the Left.

Stupid is not the word I would use IGNORANT . Because that is exactly what this former Marine thinks of the lawmakers in the House. I am not leaving off the GOP, since they just as culpable as the Socialists. This administration is giving our tax dollars to the Chinese and the Palestinians. Then the Palestinians used that money to buy rockets from Iran and fired them at Israel. Then Israel is the aggressor. Give me a break.

There are people in Congress who are not stupid. But the senior members of Congress are in control of what Congress does, and they have an agenda that is not necessarily good for the people of the U.S.A.. And, yes, some of those senior members seem to be just a bit slow on the uptake.

LISTEN UP…The TERRORIST S/PALENSTINIANS are MURDER ING the JEWS. Would ANYONE Like CONSTANT ROCKETS BLASTED at THEM???? ANYONE Who Goes Around SHEDDING INNOCENT BLOOD Should Be Brought to JUSTICE. Do NOT Let the TERRORISTS Get AWAY With It. THEY MURDERED 12 ISRAELIS…2 of Them Were CHILDREN. Their LIVES MATTERED. From SamuraiQueen. 😩😩😩

I am skeptical about working with nato. the brits have been compromised for a long time with the euro nonsense . they have been turned into a pro-moslim group of yes-men without any will to fight. we will see, and i hope that i am wrong ..

God save Her Majesty, the classiest and savviest of sovereigns to date! The carrier is aptly named. Long may she rain fire on the enemies of peace!