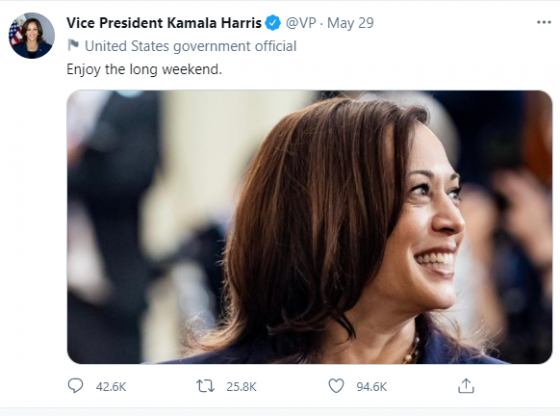 “Enjoy the long weekend,” Harris wrote along with her own photo.

Congressman Lee Zeldin tweeted what should have been the rest of Harris’s tweet:

“…and pay tribute to the courageous men and women of our nation’s military who sacrificed their lives in defense of our freedoms and liberties. #MemorialDay2021”

…and pay tribute to the courageous men and women of our nation’s military who sacrificed their lives in defense of our freedoms and liberties. #MemorialDay2021 https://t.co/9QUwwuhqHe

One retired Marine tweeted back to Harris:

“hey @KamalaHarris – my buddies wanted me to post our selfie to tell you to “enjoy the long weekend” too!” With a photo of himself in front of a wall of photos of fallen warriors.

hey @KamalaHarris my buddies wanted me to post our selfie to tell you to “enjoy the long weekend” too! pic.twitter.com/U66Z8R5rWm

“Comforting words to the families of those that lost loved ones in service to our country. With a picture of herself for good measure,” wrote Arthur Schwartz. “Imagine the meltdown that @jaketapper would be having if Donald Trump tweeted this.”

Imagine the meltdown that @jaketapper would be having if Donald Trump tweeted this. https://t.co/ibud831bOn

While the establishment media has predictably ignored this Harris tweet, it should be noted that former President Trump’s 2020 Memorial Day tweet wasn’t that much better. 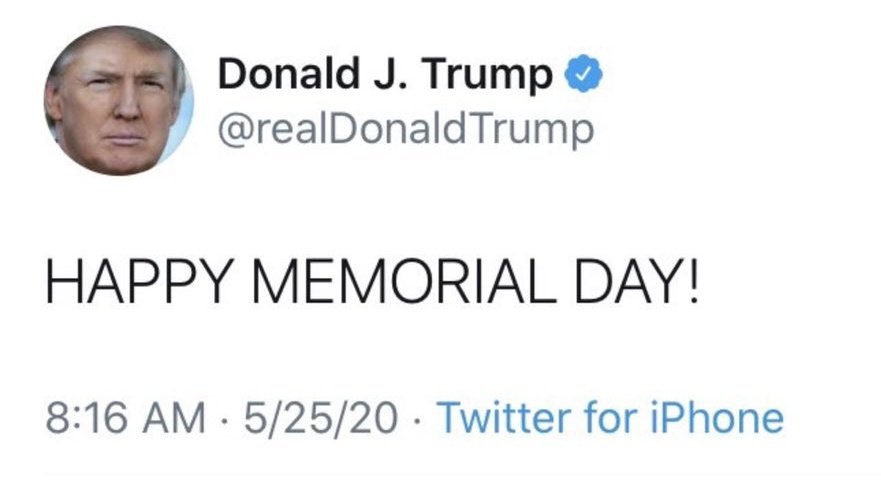 And in 2018, while at least acknowledging the fallen warriors, he did make it a lot about him too. 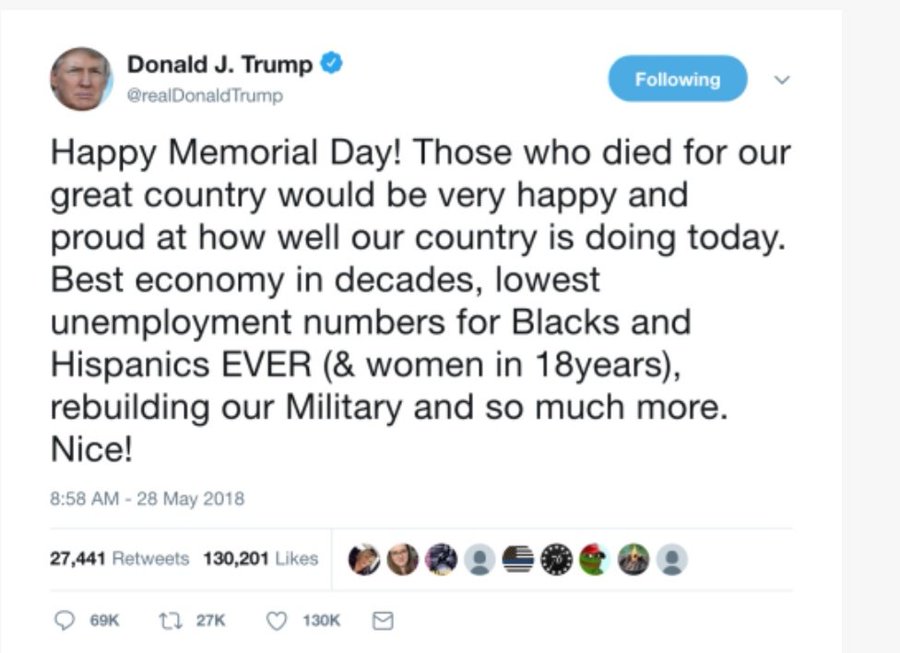 Maybe all our political leaders need to properly remember what this day is for. It is about remembering our fallen warriors, not about politicians.

Those aren’t backlashes. Those are hotops.

Actually the Democrats are all mentally ill.

Agree! They have to be just to be a Democrat. No one with right mind would be a today’s Democrat. I was back in the 60’s -80’s

Impossible to Expect Anything Else from this Narcissist! What a Joke our Country is right now with these two in the two top positions in the land! Neither has an Original Thought that isn’t plagiarized from someone else! It’s so very sad & frustrating! The Socialist / Communist Imbeciles who stole the last election certainly did a great job of Denigrating the USA & making us a Mockery to the whole world! Absolutely Corrupt & Pathetic!

I have three brother vets and two grandsons now in the service. Do others feel the outraje that I feel over this? When will the travesties stop? Or is this the “new normal”? She ignores the crisis at the border, and now this…

Kamala has the brain of a turtle and the voice of a rooster cackling. I can’t stand to look at her or Biden and have never and will never listen to a Biden so call speech. I read about what he said on internet later.

LOL yeah glad to see I’m not the only one.

To all our Veterans thank you for your service.

Herls Up Harris is nothing but a Skank Ho .
She needs to study US History before opening that cavity of a mouth !

Harris is a nasty old pig, completely unqualified so we shouldn’t be shocked. This woman has zero brains and class.

Just read what Trump actually posted for Memorial Day and whoever the moron is who wrote this article should be ashamed for lying like that. Trump’s statement was wonderful and nothing like written here.