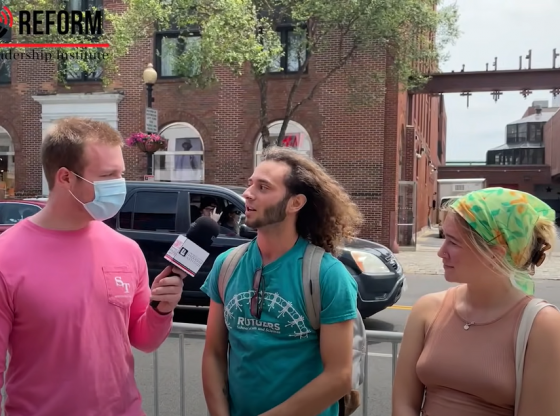 Memorial Day Alert – Demonstrating how far American patriotism has been decimated by awave of leftist ‘woke’ indoctrination in our schools and society, students and other people walking around the Georgetown area of Washington, D.C. this past weekend, signed a fake petition ahead of Memorial Day to ban the holiday honoring our war dead for glorifying ‘American Imperialism.’

The petition, authored by Campus Reform, a conservative news site and higher-education watchdog, calls for support to ban Memorial Day in the U.S. for glorifying “American Imperialism.” Campus Reform reporter Addison Smith interviewed those who signed the petition in a video published on the outlet’s website.

In the video, one young man told Smith that he thinks Memorial Day is “a celebration of U.S. imperialism and colonialism,” adding, “It’s not an attack on any individual but more of a system.”  When asked to expand on his thoughts about imperialism, the young man says:

I didn’t really think in this way until I went to college and I took women’s and gender studies classes and that put me on this path where I’m like, yeah, f–k the U.S.

For me, I was on this spirituality-type journey where we’re all one or whatever and what I was learning in social justice was the material analysis I needed to practice what I feel like exists on a spiritual plane in real, everyday life.

The young man then says “yes, please,” when asked whether he’d want to completely abolish the U.S. military.

Fox News concluded by noting that “one woman declined to sign the petition because she did not want to have one of her ‘bank holidays’ revoked, adding that the holiday should instead be rebranded as ‘something else’ that celebrates ‘something worthwhile instead of imperialism.’

Another young woman said: “If we’re going to honor and celebrate the dead, I think it should be those who lost their lives to genocide in America.”

In response, Fox Nation contributor and retired Marine bomb technician Joey Jones told “Fox & Friends Weekend” that one of the young men in the video he called “children,” appeared to be about the same age as he was when he fought in his first war. Jones added:

Have you ever seen the movie ‘Frozen’? I’ve got a 2-year-old daughter. I watch it a lot more than I want to,” Jones said, making an analogy. “There’s a snowman in the movie ‘Frozen,’ and he’s so stupid and ignorant to the world around him, he can’t wait until summer. He sings a whole song about summer, and he’s a snowman.

Comparing these ignorant woke children in the video to the ‘Frozen’ snowman, Jones said the U.S. Marine Corps represents the protections the military provides the country that, adding that the only thing keeping the snowman’s face from melting off is a “Disney princess (the United States)… and a cloud of snowflakes” (the freedoms our military provides) constantly falling on the snowman, keeping him alive.

US Professors have evidently sniffed too much cocaine and be going woke. I’m an United States citizen, and support anyone who is capitalist with conservative agenda. The left is twisting the good out of this nation. My respect to the military soldiers who have lost their lives defending our nation. I don’t agree with any of the Woke, or CRT. It’s all stupid BS

Students have been “educated” to dislike the USA?????? WTF??? Those students are our future????? The NEA should be sued and perhaps even executed…..

Memorial Day, the schools and leftists are teaching the holiday is a show of American Imperialism? An absolute twist on history. I believe this shows that the schools are just teaching the lies developed by the leftist, the communist, the simpletons that are too lazy and stupid to investigate all the wars that we have been sicked into by potentially dictator type agressors, expansionists. In every case in our history this has been the case except for the most recent case considering Arab Spring where our President at the time, Obama conspired with the Kingdom of Saudi Arabia to provide arms and military assistance to the KSA to inernally support domestic Sunni Islam warriors in the overthrow of the countries gov’t, such as Egypt, Syria, Libya, etc. in order to support the Saudi gov’t expansion of Sunni Islam over the countries mainly open religious beliefs of mostly all others. The Saudis and obama’s U.S. military did so in violation of the Constitution, meaning without legal approval from Congress. That war is still going on with President Trump trying to stop it when he was in power but as it was support to an ally of the U.S. and oil was involved the support continued with not only ground support but as well air and U.S. Navy. In addition it also included assistance by the dem party and complex associations but most oppositions came from the Republicans and the conservatives, however another complex issue was that obama led the U.S. political leftist movement with China to go beyond the globalization program and Saudi expansionism to an effort leading to socialism aith allies of socialistic gov’ts like Venezuela, Cuba, a few in Europe. China being involved and interested in world control over minerals and world trade and with steel making and associated industries and gaining U.S. industrial and military technology developments. In this area China also developed with obama using U.S. tax funds to pay for the development of bio weapons and introducing them with China into the U.S. and Europe and other worldwide countries murdering millions along the way. The U.S. involvement was fought totally by patriots within the parties but were controlled by media acting as influence with continued lies and development of hollywood stories from liberal followers and leftists. The U.S. involvement was certainly not imperialistic but a conspiracy of people with money and manipulation of using U.S. tax dollars. No other act of military agression has been so interpretted as such in the U.S. In my view, this act of leftist, globalization and socialist programs is totally illegal and violation of the entire Constitution and U.S. law. All the people involved should be arrested and charged with treason against the U.S. and charged with violations of crimes against humanity and the millions of deaths caused by it if we as a Nation had the gonads to carry it forth.

Brain dead. Those people died so you can spout your effin bullsheet.

So disheartening to see that our youth’s have had their perception of America so perverted. I wish that young man had used this as an opportunity to educate, all he had to do was ask those young people to cite a specific example of what America has done that made them believe it is an imperialist nation. Then ask them if they knew that Memorial Day started as Declaration Day and was started by newly liberated blacks to honor black soldiers who fought on the front lines of the Civil War.

yo vinnie
Reply to  Lily

Yes. No matter how many “spritiual” trips that wuss takes, there will still be someone who would like to run him over with a tank or remove his empty head.

Mindless youth convinced of anything because basically they believe in nothing. Religion has literally been thrown out and Saul Alinsky is the poster child for this Think less mind control indoctrination. This is the future generations of America. Sickening.

How in the world did those students become college students? Maybe college truly isn’t for everyone. At least colleges should make being intelligent a requirement. But then again maybe they were till they attended college.

To think, we have been telling and kind of forcing our children for years to go to college to make something of themselves. Yet, we have been paying for these demented professors to destroy the minds of our children! This fact should have been very obvious to most Americans, I have seen it slowly taking place for many years, now here we are!