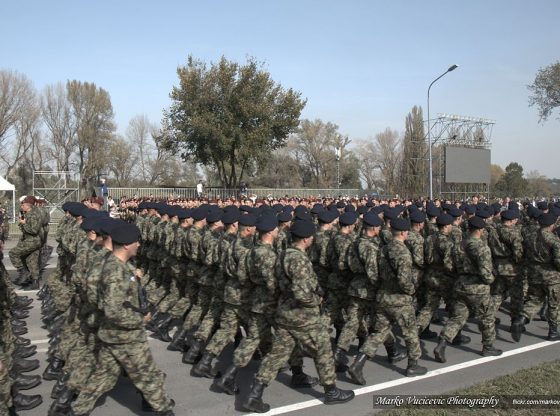 Russian and Serbian Troops assemble and march to celebrate the anniversary of Belgrade's liberation from Nazi occupation, the Serbian capital hosted its first military parade in nearly 30 years. / Photo by Marko Vucicevic via (https://creativecommons.org/licenses/by-sa/2.0/deed.en) Flickr

Today’s PDB includes a variety of critical issues such as – DC Guard’s use of MedEvac helicopters over DC protests was ‘reasonable,’ Pentagon review says. As Russia tensions simmer, NATO conducts massive war games. Stop saying the US military spends more than China, it doesn’t matter. A call for chaplains to reconcile and properly support LGBTQI+ soldiers. The Pentagon wants a new ‘reg’ for prosecuting extremism.

Who would win a US-China war?

Plus, the GOP slams Biden’s flat defense budget as ‘Wholly inadequate,’ despite record investment in tech.

US Army’s FY22 budget backs modernization, cuts ‘down into bone’ of legacy fleet.

Biden proposes a flat budget for the Coast Guard. Despite recent calls for more resources.

Marine Corps continues to get smaller under latest budget proposal

Starting again: A call for chaplains to reconcile and properly support LGBTQI+ soldiers. The door slammed open and then quickly shut as the first sergeant stormed into my office. “Chaplain!” he exclaimed. “I just learned one of my female E3s is no longer a ‘she,’ but a ‘he.’ What the *** am I supposed to do about that?”

The Pentagon wants a new ‘reg’ for prosecuting extremism. The Defense Department has been rolling out initiatives to address the threat of domestic extremism serving in uniform since early this year, and now its next budget request hopes to throw some money behind them.

Guard’s use of MedEvac helos over DC protests was ‘reasonable,’ Pentagon review says. The use of a UH-72 Lakota medical helicopter during last summer’s protests in Washington, D.C., which flew low over a crowd and hit them with rotor-wash, was reasonable given the declared emergency, according to the Department of Defense Inspector General.

US Army’s FY22 budget backs modernization, cuts ‘down into bone’ of legacy fleet. The U.S. Army is taking a hit in the president’s fiscal 2022 defense budget request compared to the other military services, but the land force continues to staunchly guard its ongoing modernization efforts intended to provide overmatch against adversaries like China and Russia by 2035.

US Air Force to mothball dozens of A-10s, F-15s and F-16s in FY22 budget. The U.S. Air Force wants to send more than 200 aircraft to the boneyard with its fiscal 2022 budget request, freeing up $1.3 billion in savings that it can reinvest in cutting-edge technologies like its sixth-generation fighter and hypersonic weapons.

Marine Corps continues to get smaller under latest budget proposal. The Marine Corps plans to continue downsizing, while asking for a slightly bigger budget, according to the 2022 budget request released on Friday.

As Russia tensions simmer, NATO conducts massive war games. As tensions with Russia simmer, thousands of NATO troops, several warships and dozens of aircraft are taking part in military exercises stretching across the Atlantic, through Europe and into the Black Sea region.

If the US went to war with China, who would win? A great deal has been written about the possibility of a war between the U.S. and China. It tends to be measured in theoretical terms, and much of the analysis centers on exactly when it might occur. But the vital question is really quite simple: who would win?

Stop saying the US military spends more than China (it might not matter). No. It is not the case that the competitor that spends the most automatically wins.

Frequent military funeral duty may increase soldiers’ risk of suicide, officer warns. Army Capt. Kristen Bell stunned XVIII Airborne Corps leaders at a forum on preventing suicides in the ranks with her warning that soldiers assigned frequently to military funeral details are at risk of taking their own lives.

We have no defense against any army, Chinese or otherwise, when you sanction transgenders and the likes to fight throwing snow balls and scarves at their enemies. We need mindsets like “Mad dog” a retired Marine commander.

Extremism in the military is up to interpretation like beauty is in the eyes of the beholder. I had army buddies that dated only full figured women, others who searched for Miss Twiggy. Extremism, well we gave up uniformity under Premier Obama, we look foolish compared to other foreign major forces. We lowered standards to fulfill a make believe world. Sex change is not a good reason to join the military, which makes candidate non-deplorable on short period enlistments. Are Trump supporters who openly tell you they love America, are the lunatics now running the military saying these kids are extremist? How about refusing to salute the flag, or join in a flag honoring ceremony, is that extremist, or justified according the military lunatics book of twisted logic?

LISTEN UP….Just Drop an A-BOMB on CHINA like the U.S. Did on JAPAN. That Wi ll Get CHINA to SIGN a PEA CE TREATY. CHINA Already Used CHEMICAL WARFARE…When THEY Spread the VIRUSES. From SamuraiQueen. 😄😄😄