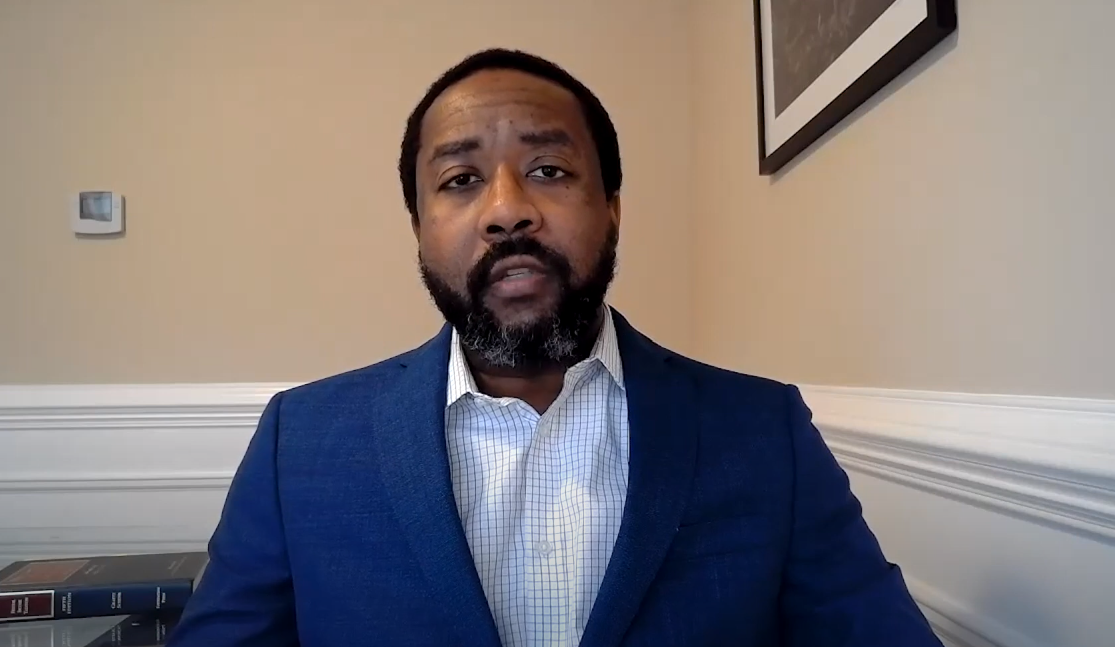 PENTAGON WATCH – As I wrote previously – “Despite serious constitutional concerns, lack of evidence to justify the effort, and even top commanders’ stating that they have ‘zero extremists’ in their ranks, the Biden Pentagon continues its dangerous, shamelessly politicized, McCarthy-like witch hunt against conservatives in the U.S. military.” Leading this controversial effort is Bishop Garrison, a polarizing former army officer and West Point graduate.

Despite his honorable military service, including two tours in Iraq where he earned two Bronze Stars, and a Combat Action Badge, his ideologically biased and highly partisan political views and statements leave much to be desired. His radical views have been lambasted by critics due to his influential new Pentagon role.

As the Daily Caller reported, “Garrison said in no uncertain terms just two years ago, prior to his appointment by Secretary of Defense Lloyd Austin to lead the Pentagon’s countering extremism working group, that supporters of Trump support extremism and racism.”

He’s dragging a lot of bad actors (misogynist, extremists, other racists) out into the light, normalizing their actions. If you support the President, you support that. There is no room for nuance with this. There is no more “but I’m not like that” talk.

Support for him, a racist, is support for ALL his beliefs. He’s dragging a lot of bad actors (misogynist, extremists, other racists) out into the light, normalizing their actions. If you support the President, you support that. There is no room for nuance with this. There is no more ‘but I’m not like that’ talk. — Bishop Garrison (@BishopGarrison) July 28, 2019

Some would argue, as I have, that his comments identify Garrison as a left-wing racialist extremist.

While his defenders try to justify Garrison’s comments because he was responding to President Trump’s criticism of the late Democrat Congressman Elijah Cummings, for ineffectively representing crime-ridden Baltimore, Maryland, which Trump called “a disgusting, rat and rodent infested mess,” there is no defense for Garrison’s comments.

Comments like those he made against all Trump supporters should bar Garrison from any policy position in the federal government, but especially from a position where he will be the arbiter of what is or is not defined as ‘extremism’ at the Pentagon. Yet, despite Garrison’s publicly stated belief that all Trump supporters are racist extremists, Biden’s Defense Department has doubled down on supporting him.

“The Department has full confidence Mr. Garrison can lead the Counter Extremism Working Group as it carries out its mission,” a spokesperson for the Department, reported the Daily Caller. “The Department is focused on addressing the corrosive and potentially dangerous behavior that can be inspired by extremist ideology – behavior that harms good order and discipline and our readiness.”

However, disturbingly, the Pentagon has yet to provide any data or statistics to show where this so-called extremist threat exists in our military, or how it is currently harming ‘good order and discipline and … readiness.’

Reinforcing the ‘witch hunt,’ or ‘fishing expedition’ nature of this politicized effort, Pentagon Press Secretary John Kirby said during a May 18 press conference that:

Mr. Garrison is leading the extremist working group on a number of efforts to try to help us come to grips with learning how — what the scope and scale of the problem of extremist activity in the ranks really is, and helping us divine some potential solutions, going forward.

How can the Pentagon insist there is a huge extremist problem that needs addressing, while simultaneously admitting they need to ‘come to grips’ with ‘what the scope and scale of the problem of extremist activity in the ranks really is’?

Garrison is also a vocal advocate for the radical 1619 project, having defended it against criticisms from historians in a 2019 essay calling extremism and white supremacy existential threats to the nation.

In response to the growing concerns about Garrison and the extremism effort, on May 26, 30 Republican members of the House signed a letter complaining of “creeping left-wing extremism” in the military. The letter, which was led by Rep. Matt Rosendale and co-signed by Paul Gosar (R-AZ), Greg Steube (R-FL), and others, called on Sec. Austin to “fight back” against extremism from the left.

Despite partisan and ideological attempts to exaggerate the ‘extremist threat,’ a recent study from George Washington University and the U.S. Military Academy at West Point found that only about 12% (43 out of 357) of the people charged with rioting at the U.S. Capitol on Jan. 6 had ‘some form of military experience.’

This is almost in line with the percentage of veterans across the entire adult US population – 10%. There are 19 million veterans in the US. ADN

He’s Way Off Base with his Logic

Garrison is a racist and Biden is a White systemic racist. Logic is not part of their DNA. Our deep appreciation for the Supreme Court passing Obamacare and refusing to hear arguments about the Democrat magnificently rigged election and staying out of immigration policies. Hope MS13 moves into Justice Roberts and Biden’s hood.

** WE THE PEOPLE NEED TO DEMAND CONGRESS IMPEACH BIDEN AND HARRIS! **

Anyone who reads the text of the UN Agenda 2030 will realize that American Leftists are getting their New World Order better than half completed. PDF available on the Web.

The problem is, then we get Nancy Pelosi as president. Do you want that?? Of course, if we managed to impeach Biden and Harris, then maybe Pelosi wouldn’t be too hard to do.

To show they are nice people and cooperative, Republicans rubber stamped Biden’s appointments with little questioning. So, puppet Biden gets what he wants. Is this the government we deserve??

Wow! How do we fight back against these radicals that are in power? Beginning to wonder if we’ll even have another election. A lot can happen between now and 2022—and it’s looking like it’s all bad for conservatives.

I have to wonder, with serious concerns, as to how much money Garrison is being paid ?!?!?! With such as military background as his, one must wonder how Garrison could ever become so UN-Constitutional and Anti-American ?!?!?!

That is a lie that All Trump supporters support Extremism and Racism. Not true. This Garrison piece is a hit piece against all Trump supporters as well as against President Trump. All a very big lie. The Trump supporter is a peace-loving as well as Freedom and Constitution supporting American Citizens. The ones that are the problem in America are these swamp-dwelling Democrats like Nancy Pelosi, Joe Biden, Kamala Harris, Susan Rice, Eric Holder, Barack Obama, Hillary Clinton, and these other swamp dwellings Republicans like Mitch McConnell, as well as all of the Dirty Republicans that Voted in Favor for all of Joe Biden’s Anti-Constitutional Bills.

By eliminating conservatives there will be no one in the military to oppose a coup.

Well, if Trump voters are all “racists,” then the military is, indeed, full of “racists,” since military people tend to vote for Republicans over Democrats.

As for “the Bishop,” he seems to be the anti-White racist in chief. This article is right to see the attempt to remake the US military in the totalitarian model, where the chief qualification is political orthodoxy, as a threat to our security and our freedom.

Extremists, the Extremists are the people who are calling it out the loudest “democrats”

RIGHT NOW Democrats are trying to force through S. 1, they’re deceptively named ‘for the people’s act.’ This act would FEDERALIZE our elections, taking the right of states, guaranteed by our Constitution, away thus removing control by local voters. It also mandates matching federal tax dollars for campaigns, expected to cost billions each election cycle, eliminates voter ID, mandates mail in ballots nationwide, mandates same day registration as well as multiple other requirements that would make it nearly impossible for conservatives to elect a conservative candidate.
Call, write or email your Senator-irregardless of party-and demand they stand against this takeover of our elections. Be civil, be polite, but be tell them a firm NO on S.1.

Biden has assembled the most virulent group of anti American racists ever know in the federal bureaucracy, and Garrison is one of the very worst, along with SecDef Lloyd Austin. Why is it that every Negro Biden supports is a hard-over, radical racist? One would think he is doing it on purpose.

I bet he is one of these leaders that took credit, got medals for sending the true heros to thier deaths and he is blameless. He is just anotherr idiot and probably got through West Point because of his color. Now these are my assumptions based on his totally stupid, or corrupt, you pick, actions. He has no responsibility for the military except to tear it down. Now that is not to say there isn’t room for improvement but he is a racist and those are the people that use the racist card the most. Me I have no respect for anyone who selles thier country down the drain, who, on the backs of others, takes credit and would love to hear the truth about this idiot but I have a feeling that truth, as with many issues, will never surface,

Garrison is a traitor and nott too smart, ok wee really dumb. He must have gottrn in , college (Airforce Academy because or quotas not becuse he deserved it.. my guess.

[…] order and discipline and our readiness.”  But the DoD has yet to provide (if it can) any data to show where even one extremist threat exists in our military, or how it is harming ‘good […]

[…] order and discipline and our readiness.”  But the DoD has yet to provide (if it can) any data to show where even one extremist threat exists in our military, or how it is harming ‘good […]