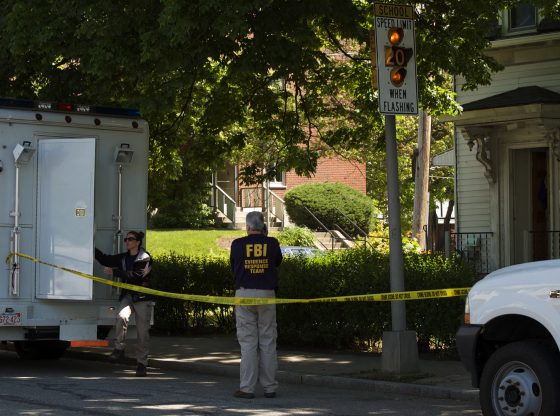 HOMELAND SECURITY – In recent years, the FBI has been criticized by federal judges over its use of the National Security Agency’s (NSA’s) vast electronic sweep of emails, texts and other electronic data. But a newly declassified, and heavily-redacted, Foreign Intelligence Surveillance Act (FISA) court report, now shows that in 2020 the FBI searched through troves of communications gathered by NSA without a court order for information specifically on alleged “racially motivated violent extremists.”

This FISA report “shows the FBI has continued to perform warrantless searches through the NSA’s most sensitive databases for routine criminal investigations, despite being told by a federal judge in 2018 and 2019 that such a use was an unconstitutional breach of privacy,” the Daily Mail reported.

This issue is particularly worrying as Biden’s Pentagon and Department of Homeland Security (DHS) are conducting politicized witch hunts for ill-defined “domestic extremists” within their ranks, and Congress ponders new domestic terror laws. The FBI focused many of its warrantless searches – commonly referred to as ‘backdoor queries’ – on suspected ‘far-right’ domestic terrorists, The Daily Beast reported.

In 2019, a federal court ruled the U.S. government can collect information about its citizens without obtaining a warrant if the information is gathered inadvertently while legally carrying out surveillance of non-nationals abroad, such as the NSA does routinely.

However, while ‘incidental’ collection of Americans’ data is allowed, sifting through databases of stored NSA information likely violates the Constitution’s Fourth Amendment protections against unreasonable searches and seizures, analysts say.

The FBI has traditionally only been allowed to seek data in cases of national security. But after the bureau began making requests for routine criminal investigations, the FISA courts have been cracking down on how the FBI can access the data of Americans who are caught in these sweeps, noted the Daily Mail.

The Daily Mail also noted that it is unclear from the FISA report whether the FBI uncovered any criminal ‘extremist’ behavior or made any arrests resulting from the searches. Also unknown is what the Bureau did with seized data that was harmless or irrelevant to its search.

What is also unclear is just how many law abiding Americans had their personal data viewed by the FBI in its search for “racially motivated” extremists.

A senior FBI official told the Daily Mail that the FBI had taken ‘numerous steps’ to comply with the FISA court guidance over the past 18 months. ADN

What NSA need to search is Obama , Hillary Clinton, John Kerry everyone that is trying to change America.

??? That leadership is part of the daemons trying to take-down our country!

FBI isn’t going after criminals they are going after conservatives and those that believe in the Constitution. The criminals are in charge in DC under the jo and ho clown show

BHO totally opened the way for warrantless searches just before he left office.

Marxist Democrats are just doing what leaders of a totalitarian state do. unfortunately we have no leaders on the conservative side of the isle. No way to fight back. We will be forever slaves of the deep state. R.I.P. Democracy.

What happened to the Hunter Biden thing??? Why isn’t that being investigated???

They are using The Event on Jan 6th at the Capitol to distract everyone from the Biden Criminal Activities, BLM, and ANTIFA …. it is easier to make up False Charges on Citizens and hold them in a DC Prison and unlawfully mistreat them ! .

Don’t trust the fbi or doj. They are comprised of thugs who lie and threaten.

Since Obama fixed the Bureau in his image, they been ignoring crimes of democrats, since the Obama made them his very own police force, and filled the department of injustices with a Marxist fifth column, they reek of corruption as a bias political weapons of the Globalist democratic socialist workers party. Now each federal cabinet chief weaponized their agency to protect their faithful party members, propaganda brain washing one party propaganda information sources. Obama former aids now appointed as the Biden puppeteers. The newest unconstitutional is scam HR1 to rig all future federal elections forever, by allowing 16 year olds to vote, ending voter ID requirement, ballot harvesting, more mail in ballots, and Election Day registration. Our Globalist illegal masters in the congressional majority tell their ignorant the republicans are trying to suppress voting rights when HR1 takes away powers given to states under the constitution by taking the state legislature powers away and giving thise powers to our Globalist Communist masters. Like the executive order to end our sovereignty as a nation for open borders. They invited illegals to come with easy amnesty and monetary rewards, then blamed Climate change and Trump for their invasion they ignore daily on purpose. The election of 2020 being rigged changed everything, it forced upon the people. Like propaganda artist Cortez’s new green deal they plan to stick up our asses. Congress members Investments into green energy companies prior to the rigged elections allows our illegal masters to clean up while the republic is destroyed.

The people have given the SWAMP power to rule. The SWAMP has NO intention of letting their power be diminished or controlled. Trump exposed the problem and the SWAMP rigged the election. So, what are we going to do about it. Yep – go to court for another 50 years and get nowhere.

The Swamp is afraid of us and our guns that is why they want to confiscate all out weapons ! NEVER EVER GIVE THEM UP !

Thomas. A few hundred capitol protestors from Jan 6th were hunted down, put in solitary confinement, no bail, no hearing or trials set so far and they are forgotten. It’s like we are living in Venezuela/Cuba. Do you really think the Left is afraid of us because not one demonstration is being held for these American political prisoners who are Trump supporters and defenders of American ideals and fair elections? When the FBI knocks on your door for your guns – you’ll hand them over. We’re in deep trouble and bravado won’t cut it. Not a single group has returned to the capitol to protest anything while Kamala/Biden are destroying this country.

We Patriots will soon be called upon. The corrupt will be running scared not running America into the ground. Look out, it is on the horizon.

I hope so Bead, but puppet Biden, the buffoon of all time, is in Europe right now selling out our country. Putin is laughing his rear end off along with Xi and Iran. Media still supports Biden while police and military follow government orders. They stood down while cities and police stations burned to the ground. We’re in perilous times.

How funny the FBI is trying to follow the courts orders. Bad news for you idiots you just follow the courts orders no trying about that. I find all these alphabet soup supposed agencies that are there to protect the US population are the main groups that hurt the american public if you are on the right. Anyone who would be in these agencies are hand picked to not worry about what is legal when it comes to the right just how to lie to hurt law abiding citizens. Was the FBI ever useful? Good question.

A fine old German man who had seen it all before summed it up: ‘These young people have got it too good.’ Right. We’ve had it much too good for much too long. NOW see what it got us! While we were dozing, look who’s now in charge! And they have no intention of conceding power.