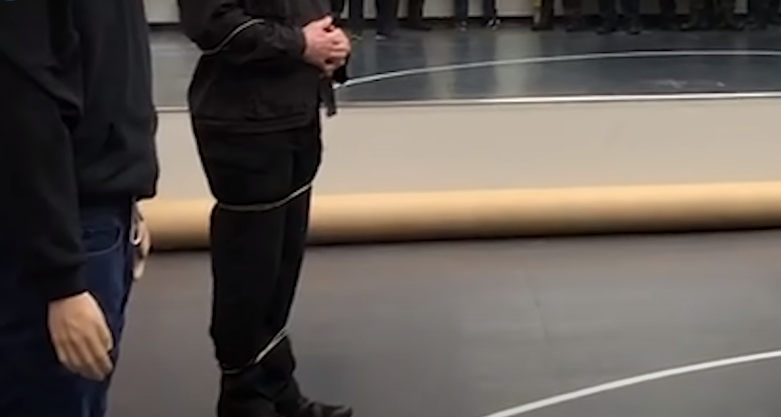 Miami Local10 news reported that the new tool, the BolaWrap, made by Wrap Technologies, is not a weapon, but an apprehension tool to primarily subdue people who are dealing with mental health issues, or people on drugs, or people who are intoxicated.

A yellow, hand-held device, it fires a lasso-type Kevlar cord that wraps around a person’s arms or legs from 10 to 25 feet away. Designed to detain a person from a distance, it gives officers an alternative to guns or Tasers.

The company’s website notes that “Like “remote handcuffs,” BolaWrap® safely & humanely restrains resisting subjects from a distance without relying on pain compliance tools.”

While it looks like something Batman would use, Bolas were most famously used by the gauchos (South American cowboys) but have even been found in excavations of Pre-Columbian settlements, especially in Patagonia, where indigenous peoples used them to catch 200-pound guanaco (llama-like mammals) and birds.

“Non-compliant subjects in mental crisis & drug-impaired subjects are often incapable of comprehending commands of officers. BolaWrap enables officers to safely & humanely take subjects into custody without injury to get them the help they need,” the website adds.

According to Local10 news, Wrap Technologies CEO Tom Smith explained that “Rather than escalating and having to use a taser or pepper spray, or, ultimately a firearm, we are trying to avoid that.” City of Miami Police Chief Art Acevedo added, “This is another option that can help us bring the person into custody, and, quite frankly, it’s not even a use of force.”

According to a report by several ‘Use of Force’ experts, BolaWrap is placed lower on the Use of Force Continuum than handcuffs and it recommends that BolaWrap be carried by all frontline officers. Other police departments who are using BolaWrap reportedly include Los Angeles, Sacramento, Fresno, Bell, Albuquerque, Minneapolis, West Palm Beach, Fort Worth, and Oak Ridge.

While BolaWrap is reportedly rolling out in Miami now, no word exactly on when it will be fully fielded with the City of Miami Police. Meanwhile, expect more law enforcement agencies to soon deploy this highly useful, non-force ‘Batman’ apprehension tool. ADN

L ISTEN UP…WE Need to Use that BOLA WRAP on TERRORISTS…BLM…ANTIFA..CHINESE GOVT…VIOLENT PROTESTERS..CRIMINALS etc I am GLAD I Live in the TECHNOLOGY ERA. From SamuraiQueen. 😄😄😄

Why oh why can’t we use this ‘wrap’ technology on the tongues of the Squaw Squad?

Not perfect, but anything is an improvement. Now, if only you could get perps to stand still for a minute or two, less than 25 feet from you.

Seems to me a sharp pocket knife would easily undo that? Am I wrong?