Honoring the American Flag Day on Flag Day – Flag Day is celebrated annually on June 14 to commemorate the adoption of the Stars and Stripes as the official flag of the United States by the Second Continental Congress on June 14, 1777. Over 100 years later, in 1916, President Woodrow Wilson marked the anniversary of that decree by officially establishing June 14 as Flag Day.

What better way to honor the American flag today than to remember and honor the first of only 88 black American soldiers to earn the Medal of Honor – Army Sgt. William H. Carney. Technically, he wasn’t the first black soldier to receive the medal, since it wasn’t awarded to him until 1900, but his actions in 1863 were the first to earn it.

Carny earned the Medal of Honor for protecting one of the United States’ greatest symbols during the Civil War — the American flag. Considering his heroic efforts to save the flag, what would Sgt. Carney think of Colin Kaepernick and other players kneeling in protest of the National Anthem and the American flag today? 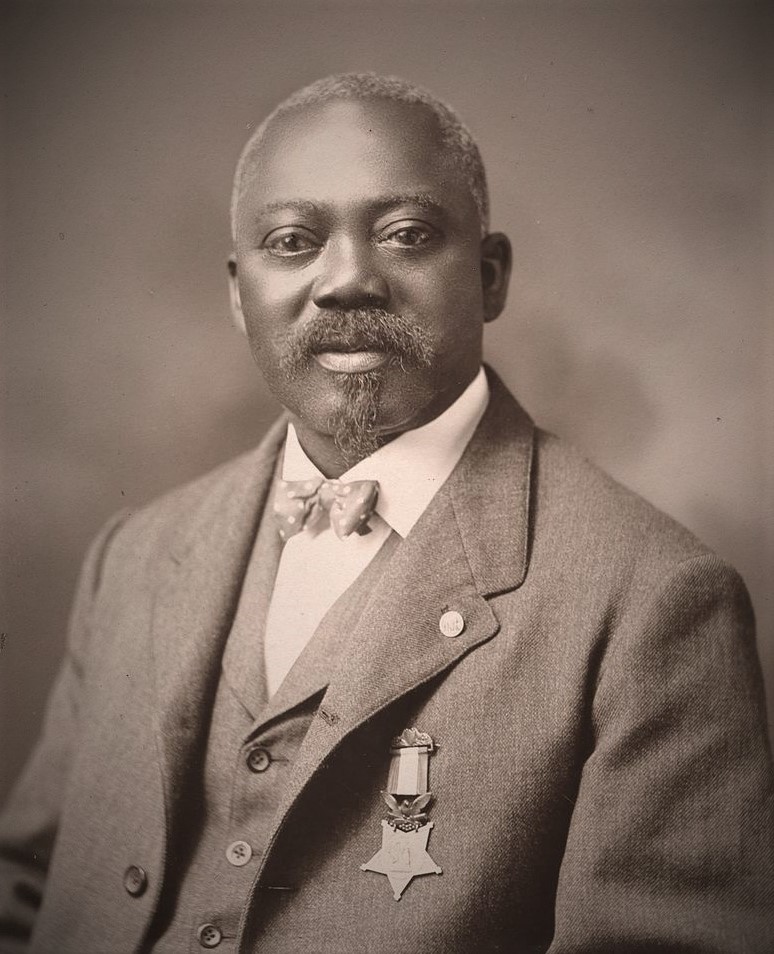 According to the Department of Defense News, Carney, an escaped southern slave:

…had wanted to pursue a career in the church, but when the Civil War broke out, he decided the best way he could serve God was by serving in the military to help free the oppressed.

In March 1863, [at age 23] Carney joined the Union Army and was attached to Company C, 54th Massachusetts Colored Infantry Regiment, the first official black unit recruited for the Union in the north. Forty other black men served with him, including two of famed abolitionist Frederick Douglass’ sons.

Within a few months, Carney’s training would be put to the ultimate test during the unit’s first major combat mission in Charleston, South Carolina.

On July 18, 1863, the soldiers of Carney’s regiment led the charge on Fort Wagner. During the battle, the unit’s color guard was shot. Carney, who was just a few feet away, saw the dying man stumble, and he scrambled to catch the falling flag.

Despite suffering several serious gunshot wounds himself, Carney kept the symbol of the Union held high as he crawled up the hill to the walls of Fort Wagner, urging his fellow troops to follow him. He planted the flag in the sand at the base of the fort and held it upright until his near-lifeless body was rescued.

Even then, though, he didn’t give it up. Many witnesses said Carney refused to give the flag to his rescuers, holding onto it tighter until, with assistance, he made it to the Union’s temporary barracks.

Carney lost a lot of blood and nearly lost his life, but not once did he allow the flag to touch the ground. Carney was promoted to the rank of sergeant for his actions.

The National Museum of the U.S. Army notes:

Carney was severely injured. Yet, he still managed to save the American flag after previous color bearers fell. Carney said, “I threw away my gun, seized the colors, and made my way to the head of the column” proclaiming, “I did but my duty; the dear old flag never touched the ground.”

This action displayed the pride the 54th took in their role as U.S. Army Soldiers and showed the bravery and military skills of the Black Soldiers.

His actions also showed the deep respect, love and affection these black soldiers had for the American flag. For his bravery, Carney was awarded the Medal of Honor on May 23, 1900, by President Theodore Roosevelt.

When the color sergeant was shot down, this soldier grasped the flag, led the way to the parapet, and planted the colors thereon. When the troops fell back he brought off the flag, under a fierce fire in which he was twice severely wounded.

In 1901, shortly after his medal was awarded, a song was published about his daring exploits: “Boys the Old Flag Never Touched the Ground.”

Carney died at the Boston City Hospital on December 9, 1908, of complications from an elevator accident at the Massachusetts State House, where he worked for the Department of State.

His legacy serves as a shining example of the patriotism that Americans felt at that time, despite the color of their skin. An example many should remember today. ADN

Obviously he was a proud American…and, not a (fill-in-the-blank)🤬

And amazing the Republican Party didn’t recognize his accomplishments at the time the heroic event happened.

American courage, loyalty, fortitude, at its finest. His story should be taught, and an inspiration to all, who still believe in that “golden house on the hill”. Regrettably what beats in the hearts of many young Americans today is the plop kerplop beat of self gratification and propagandized hate filled falsified phantasms about our past. Chickens wander our streets and political halls, instead of heroes.

Right on it’s sad and so evil

There are countless similar stories, the contributions to this nation by black Americans are endless, unfortunately our federal administration works to divide us as a people using Marxist copied strategies, and shove near Communism up our fannies . The rigged elections everyone on earth ( watch foreign news) acknowledges and laughs about it. We are fed racial hatred by our masters in our illegal dictatorship, that enslaves us under tyranny, and the lunatics in the congressional majority feeding their followers have truths. We endure weaponized cabinet agencies, 98% of all news as well being Marxist propaganda , and now the federal government’s forced Marxist indoctrinate upon our innocent children in our public schools. Our Global communist illegal masters ended our sovereignty as a nation, by a first day executive order, a nullification of immigration law, and an open act of criminal treason. We are in deep shit;” the lunatics are illegally running the asylum.”

AN EXCELLENT STORY. THIS IS AN EXAMPLE OF REAL AMERICAN HISTORY.

I wonder if they will try and erase it from history, I wonder how many Blacks even know about this story

This man was a great American. May his memory be blessed.

In the late 60s I spent 34 months in the Army. I had the occasion to serve in Korea and Vietnam. It was apparent to me that the Army ran on the strength of its senior NCOs, most of the best of which were black career men. I learned much from these people. Gentlemen, I salute your service.

A man who loved his country. Every American should be proud of his valor and courage. Maybe we all should learn from this hero. Instead of complaining and rioting he was willing to give his life for our flag. How many of us could live up to his love of his country?

I knew that Carney had been a slave in Virginia, and made his way to Massachusetts where he musters into the 54th Infantry.
At some point he worked as a lamplighter, post-man than as the post master in his town. His being a slave who chooses to fight for his freedom makes his story that much more impressive, Every time I would read about professional ball player foolishly following a ignorant pied piper I think of Carney and wonder what he would think of them.

A true patriot. The kneelers could learn a thing or two from reading his story but they still wouldn’t be able to measure up to him.

This honorable brave man goes on my list of heroes.

This patriot and hero should have a memorial or statue erected in his honor.