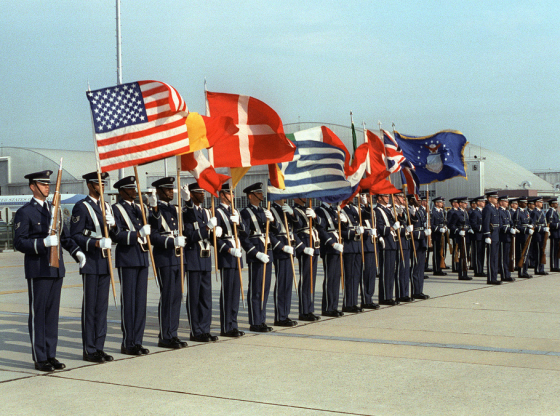 In a recent provocative thought piece for the Center for American Defense Studies (CADS), Major General Don McGregor, USAF (Ret.), a CADS Senior Advisor, asked whether a Russia ‘Reboot’ was still possible. He noted how, in light of the growing CCP China threat, the U.S. would be better served with a friendly, or at least neutral Russia, than a hostile one.

McGregor also explained how NATO expansion to Russia’s borders had helped create the current dangerous frictions and hostility between the West and Russia.

And now we have Stephen Wertheim, an Ivy League academic, and historian of U.S. foreign policy, arguing the same thing in the New York Times (NYT).

Wertheim is the director of grand strategy at the Quincy Institute for Responsible Statecraft, and a visiting faculty fellow at the Center for Global Legal Challenges at Yale Law School. His opinion piece is titled: Sorry, Liberals. But You Really Shouldn’t Love NATO

Wertheim notes how the left’s new found love for NATO and other military alliances is as much about being anti-Trump, than about sound policy. He writes: “To most Democrats, alliances symbolize international cooperation. Proof positive is that Donald Trump supposedly sought to tear them down.”

Unfortunately. They have been wrong on both counts.

After the Soviet Union collapsed in 1991, depriving NATO of its original reason for being, skeptics of the alliance included liberals as much as conservatives. In 1998, 10 Democratic Senators joined nine Republicans in opposing the first, fateful round of NATO enlargement, which would soon extend the alliance to Russia’s border.

Among the dissenters was Senator Paul Wellstone of Minnesota. In between voting against the first Iraq war in 1991 and the second after Sept. 11, Mr. Wellstone warned that expanding NATO would jeopardize Europe’s hard-won gains. “There is peace between states in Europe, between nations in Europe, for the first time in centuries,” he said. “We do not have a divided Europe, and I worry about a NATO expansion which could redivide Europe and again poison relations with Russia.”

Events have proved him wiser than his party seems to think. The left has ceded criticism of NATO to the right, mistaking armed alliances for friendly partnerships and fixating on Mr. Trump’s rhetoric instead of his actions.

Partisans and the media fixated on Trump’s rhetoric and his nominal withdrawal of 9,000 U.S. troops from Germany – mostly redeployed forward to Poland and other front line states on Russia’s borders. However, “In the end,” Werthweim notes, “he [Trump] reaffirmed every U.S. alliance commitment, embraced NATO’s expansion to Montenegro and North Macedonia, and beefed up U.S. forces in Eastern Europe.

But they [NATO sceptics] have gained credence as Russia objected, first with words, eventually with arms, to the expansion of an alliance whose guns had always pointed at Moscow. By 2008, NATO declared its intention to admit Georgia and Ukraine. Each had been a founding republic of the Soviet Union and had territorial disputes with Russia. For each, Russia was willing to fight. It swiftly occupied parts of Georgia. Once Ukraine’s pro-Russian president was overthrown in 2014, Russia seized Crimea, home to its Black Sea naval base, and backed separatists in the Donbas region.

And he rightly concludes:

It’s time for Americans to recover their critical faculties when they hear “NATO,” a military alliance that cements European division, bombs the Middle East, burdens the United States and risks great-power war — of which Americans should want no part.

Say it aint so. In the light of day, Trump was right again. The former SSRs should have been left to form their own alliances with tacit support from NATO as a 3rd and independent force Turkey in NATO? Give me a break.

There is peace in Europe precisely because of what the United States did in Europe after World War II. It was the opposite of what Clemenceau and Lloyd George did after World War I — where they outmaneuvered the hopelessly naive Woodrow Wilson, who was made completely irrelevant.

First, the Marshall plan to rebuild Western European economies, instead of destructive reparations. Then NATO to counter Stalin’s territorial ambitions — ambitions Russia retained until the death of Brezhnev, when it became obvious the Soviet Union was on the verge of collapse because of devoting so much of their economy to imperialism.

I have Russian friends and Colleagues (now American citizens) who say that Russia and China are now and have historically been on good terms with one another. It would indeed be in our interest to have Russia as an ally against China, or at least neutral, but they don’t see that happening.

My wife who grew up in Ukraine under Brezhnev always tells me that fear and enmity was coming from China. Besides, under Mao there was a complete split between Russia and China.

Economic sanctions are a sign of weakness, and are either ineffective or lead to war. Read your history books and find me one real exception.
FDR triggered the attack on Pearl Harbor by using economic sanctions and not confronting the Imperial Japanese military, which convinced the general staff that the US lacked the guts to fight back. There was a powerful antiwar movement remaining in the US, which FDR catered to, after the horrors of World War I. FDR did not order the military to monitor our coasts, including around Hawaii, where the military had most ammunition under lock.
Communist China has gotten away with a biological weapons strike on the rest of the world, which they prospered from, and is building up their stockpile of nuclear weapons, intending to face down the US in Asia with nuclear strikes, while threatening US mainland cities if we shoot back at Chinese mainland bases.
100 million American will die and 20 to 30 cities will be destroyed, if we don’t strike first and take out most of the Chinese nuclear forces.
With US cities in flames, the Mexican cartels, armed by China, will invade the southern states, taking the population as human shields.
Red Dawn is coming.

…while WE sit around sniping at political rivals and bickering over who is a racist or who gets to use which rest room and who is to receive reparations and free stuff.

Red Dawn Has been here a while, It Is Kept in the cloak rooms of the Democratic party for the Deep state.

i served on nuke subs for years and let me tell you there will never be a nuke war.we have missles and subs all over the world aimed at our ememies.if they ever launch any their country will be destroyed!

They were covering for the Nazis during the holocaust, back-in-the-day…so why are you surprised❓That, they’re still at it! They’ll always be anti-American, that’s their record❗️

Does the name Walter Duranty ring a bell?

It seems like modern liberals will do ANYTHING to weaken the United States. These people MUST have overflowing hatred in their hearts for individual liberty.

NATO was always a defensive alliance, not an imperialist alliance. Russia, whether using that name or “the USSR,” was always an imperialist country. It is hardly surprising that, after being freed from the “Gulag of Nations,” most of Eastern Europe wanted to be protected from Russia (or so they thought) by joining NATO. In practice, NATO has done little to protect Eastern Europe from Russia, and Western Europe, newly encouraged by the Biden Administration (perhaps as a quid pro quo for Putin standing down his soldiers at the Ukrainian border), has allowed itself to be beholden to Russia (via Nord Stream 2) for its power generation.

The real problem here is not, as Wertheimer (he of the “let’s abandon Israel” school) seems to think, that NATO is aggressive; the problem is that Russia is aggressive, having seized Crimea (I realize an argument can be made that this is simply returning what was stolen from Russia by Khrushchev, but solving the issue by military invasion, particularly as the first option, is aggressive) and other chunks of Ukraine, meanwhile constantly threatening to seize more, while NATO dithers.

During World War II the American American Army liberated death camps, I wonder if the victims of Nazi atrocities were happy to see that flay waving as it approached the death camp? What a load of human shit, this moron is, just like our illegal government working to destroy our republic and indoctrinate innocent children. A cancer to the human race, working tirelessly to destroy our republic for a Global communist dictatorship. This cancer illegally in power, threatening a once free people, cannot judge America by the good it accomplished in our history, only our faults.

Good. Strategists are beginning to do some strategy. Just for the sake of fun; doesn’t the US have a big problem in the Pacific if China has Russia’s ressources as back-up?

LISTEN UP….PREZ BIDEN Needs to MAKE the RIGHT STRATEGIC MOVES. LIFE is Like a CHESS GAME…YOU Have to KNOW the RIGHT MOVES to MAKE in ORDER to Get a CHECKMATE. From SamuraiQueen. 😄😄😄

Exactly right , What fools have we in the White House ? We need Russian Support not to make Enemy’s with them .

IT’s TRUE! And we’ve known it all along. The NYT is hard over pro Russian, pro Communist! Now why didn’t they simply tell Americans that four years ago? It would have been good communications Or maybe – they don’t WANTgood communications??