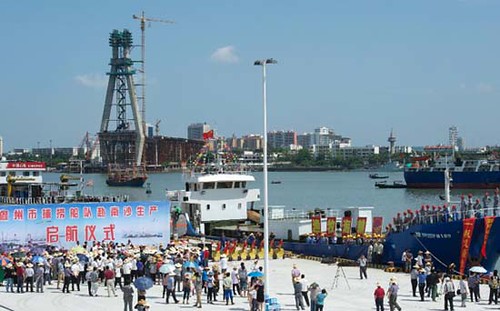 In a new form of maritime piracy, the Chinese Communist Party (CCP) continues to violate international law and norms on the high seas by its massive, industrial-scale, illegal fishing operations worldwide. This activity can also be seen as part of CCP China’s broader gray zone warfare against its neighbors and much of the world.

These gigantic, illegal fishing armadas have been particularly aggressive stealing fish in waters near North Korea, and now, Japanese islands.

An NBC News investigation in 2020, based on new satellite data, revealed that: “China is sending a previously invisible armada of industrial boats to illegally fish in North Korean waters, violently displacing smaller North Korean boats and spearheading a decline in once-abundant squid stocks of more than 70 percent.”

The Chinese vessels — nearly 800 in 2019 — were in apparent violation of U.N. sanctions that forbid foreign fishing in North Korean waters.

NBC News noted: “This is the largest known case of illegal fishing perpetrated by a single industrial fleet operating in another nation’s waters,” said Jaeyoon Park, a data scientist from Global Fishing Watch, a global ocean conservation nonprofit group co-founded by Google, based in Washington.

The result of CCP China’s fishing piracy? In 2020 NBC reported:

The battered wooden “ghost boats” drift through the Sea of Japan for months, their only cargo the corpses of starved North Korean fishermen whose bodies have been reduced to skeletons. Last year more than 150 of these macabre vessels washed ashore in Japan, and there have been more than 500 in the past five years.

But this massive illegal fishing operation isn’t just aimed at North Korea. According to The Japan News:

The number of Chinese fishing boats operating illegally around the Yamato Bank area, a good fishing ground off the Noto Peninsula in the Sea of Japan, has increased sharply since this spring, the Japan Coast Guard and the Fisheries Agency have found.

The number of such boats that the Fisheries Agency has warned to leave is six times greater than that of the same period last year, and the number of boats warned by the JCG is also higher than last year. Local fishermen have voiced their concerns about poor catches due to overfishing.

By May 27, the agency had warned a total of 320 Chinese fishing boats to leave the area. The agency used water cannons to drive 91 such boats away from the area.

In Noto, Ishikawa Prefecture, squid fishing just started on June 6. An official of a local fisheries association said, “I think overfishing is the main reason for the recent poor catch in the Yamato Bank area, and I’m worried about this year’s catch.” ADN

Does anyone get the feeling that China will try to do in this century what Japan tried to do in the last century and try and take over the Far East?

My biggest fear is that the USA will be caught with their pants down Just like they were in WWII by not listening to the warnings & the democrats are dismantling our military.
Once fired up the American citizen was full steam ahead in WWII, .
But if they had listened to the warning signs from Europe & Asia in the 1930’s there would never been a Pearl Harbor or the Nazi death camps.
Now the USA has allowed these people into the USA & even into the American government. WE MUST VET ANYONE ENTERING THE USA FROM THESE TERRORIST & THIRD WORLD COUNTRIES
If we do not WWII & PEARL HARBOR will just a walk in the park to what is coming down the track with all the Loony Tunes we have in congress now
Think about it

Grim prophecy founded both in history and in common sense!

The Chinese military seems to be moving in the direction of nuclear strikes on US Asian bases and naval forces, threatening US cities if we strike back.
I think our military will launch massive counterstrikes.
The ET that is shadowing our military will come in on the side of China, and try to protect China and destroy us.
We have ET friends, as well.
Independence Day and Red Dawn will soon play out for real.
If our infrastructure is nuked by China, will the citizens of states that border Mexico, be able to stop the invasion by the cartels, who will loot US border cities.

What is sad is that the China status is still considered that of a developing nation! How stupid of the WORLD!

If China defies the rule of law and loots the food supply of weaker nations, as Chinese and Mongol invaders have done for thousands of years, it is time to fight back.
We can produce torpedoes with Iranian or Russian markings and begin sinking these Chinese pirates.
In return for China providing Mexican cartels drugs, and chemicals to make drugs, we should help smugglers provide small arms to the oppressed Chinese people. We can also sink any Chinese ships providing drugs and arms to our enemies.
We can make torpedo attacks from distances, where our submarine is undetectable.
We can deny these are our torpedoes just as China denies the China Virus was developed to attack us, but the virus got out to soon.

LISTEN UP…The CHINESE GOVT are GOOD at RIPPING PEOPLE OFF. THEY SWORDFIGHT Below the BELT. THEY FIGHT DIRTY and THEY PLAY DIRTY. JUST ASK ALL Their VICTIMS…the ONES that are STILL ALIVE. From SamuraiQueen. 😄😄😄

Capture and scuttle. It’s the only true way to deal with piracy.

Sink them don’t warn them just sink them.

China is a big threat on many levels. With paid off, pedo, racist, chicken shit joe in office China will continue to expand. We need a real army. One that is lead by real military personel not these mamby pamby paid off “woke” leaders whose job it is to dismantle, make weaker our military.