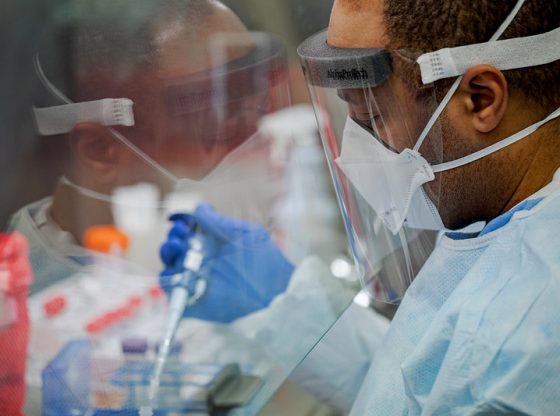 Pennsylvania Commonwealth microbiologist Kerry Pollard performs a manual extraction of the coronavirus inside the extraction lab at the Pennsylvania Department of Health Bureau of Laboratories / Photo from Governor Tom Wolf on (https://creativecommons.org/licenses/by/2.0/) flickr

ANALYSIS – As I wrote six months ago in January, highly politicized scientists who believed in the validity of the Wuhan biolab leak theory shamelessly avoided endorsing the idea while Trump was president. This only confirms how politicized even scientific research and reporting has become. The scientific elites weren’t ‘following the science,’ they were ‘following the politics.’

In my January piece, With Trump Leaving, Media Now Considering if Covid Leaked From Chinese Lab, I noted, “If Trump said something, the scientists and media called it ‘false,’ or worse, labeled it a ‘conspiracy theory,’ and simply argued the opposite.” It was pure politics. Not science.

And now we have more evidence. Based on a piece in National Review, Yahoo News reports that a:

…scientist who recently endorsed the possibility that COVID-19 originated in a Chinese lab has revealed that she and some of her colleagues waited to legitimize the hypothesis until President Trump left office so as not to be “associated” with him.

Alina Chan and 18 fellow scientists published a letter in the journal Science last month demanding a thorough inquiry into the virus’s origin, including the possibility that the virus leaked from the Wuhan Institute of Virology. The document was one of the catalysts that helped reinvigorate debate around the lab-leak theory, which was dismissed for more than a year as a conspiracy theory by much of the mainstream press and censored as disinformation by social media giants.

Researchers said the scientific evidence remained relatively unchanged but noted that “the context and circumstances of the origin debate have changed,” NBC reported. One of the most notable changes in the “context” of the debate, according to Chan, was Trump’s departure from the White House.

Chan told NBC that some scientists had apprehensions about publicly discussing the lab leak possibility out of concern that their statements would be manipulated to suggest they were endorsing “racist” language about COVID’s origins in China — an apparent reference to Trump’s use of the phrase “Wuhan virus.”

“At the time, it was scarier to be associated with Trump and to become a tool for racists, so people didn’t want to publicly call for an investigation into lab origins,” Chan said in the interview.

The National Review piece adds that “Chan’s comments come as more revelations surface about the major players involved in the early days of the pandemic, including some who deliberately helped ensure the lab-leak theory remained underground.” It notes:

President of the research nonprofit EcoHealth Alliance Peter Daszak, who helped funnel millions in NIH money to the Wuhan lab to fund research of bat coronaviruses, organized a statement published in the medical journal The Lancet in March 2020 calling the possibility of a lab-leak a “conspiracy theory.”

The Lancet letter likened the theory to the “xenophobic cousin to climate change denialism and anti-vaxxism” and “effectively ended the debate over COVID-19’s origins before it began,” Vanity Fair reported as part of a deep investigation into how the narrative around COVID’s origins was formed.

But the real conspiracy, notes Yahoo News, was the one being created by Daszak, Lancet and the WHO. Emails acquired by the watchdog group Right to Know indicated that Daszak attempted to obscure his role in promoting the statement among fellow scientists, six of whom later became members of the WHO investigative team which dismissed the lab-leak theory as “extremely unlikely.”

Expect much more about these critical revelations in weeks to come. ADN

Is High-level CCP Chinese Defector Working with US Defense Intelligence Agency?
Biden’s Defense Budget is the Greatest Threat to US National Security – Not ‘Extremism’ or ‘Climate Change’

FIRE ALL THE SCUM BAGS, POLITICS MURDERED MILLIONS AND THESE PISS ANTS WHO ARE SOOOO SMARETER THAT THE AVERAGE BEAR BO BO. AS FOR THE PUKE FOUCHI HE SHOULD BE TRIED FOR GENOCIDE AND OF COURSE HIS LIPS ARE ATTACHED TO THE BUFFOONS BUTT SO HE’LL SKATE.

Wish all the media and the rest involved including big pharma could be sued they even knew of medications that could have helped people survive COVID but it’s all about money and power. They are as bad as Como sending elderly to rest homes. They all have blood on their hands. The Good Lord will judge them!!

Which is pure evidence that they hate Donald Trump far more than their love of America and the American people. They would just to soon see America fail miserably than to give any credit at all to Donald Trump. It’s very sad that these people are so miserable in their own lives that they want other people to suffer along with them. Oh that’s the same as saying he’s that exact same way

Does a bear take a dump in the woods? Of course, and the scientist ran for cover. But whenever you pay these guys to do a job, remember what they did with Covid. Politics play big in their decisions, not scientific facts. They have already shown how weak they are.

LISTEN UP….SHAME on SCIENTISTS Who PUT POLITICS Over DOING What is RIGHT. YOU Shall Be CONDEMNED. From SamuraiQueen. 😄😄😄

Oh NO! We cannot tell America the truth!
Why not? Because: Orange Man Bad!