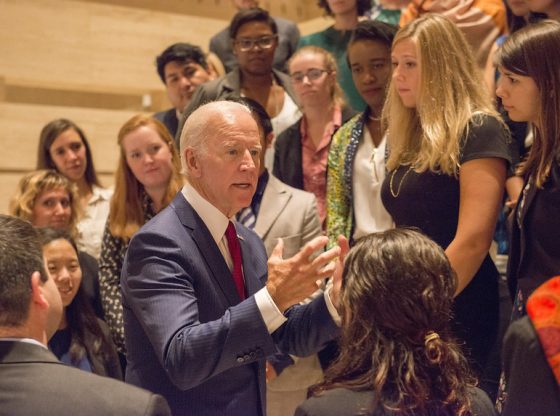 ANALYSIS – President Joe Biden finally announced his proposed defense budget, very quietly on a Friday afternoon, intentionally drowned out by the long Memorial Day weekend a couple of weeks ago. Many observers missed it – as designed. This is a standard DC ‘swamp’ tactic to avoid the issue entering the news cycle.

As Kevin Baron, editor of Defense One noted, “If the White House wanted to boast about its [defense] spending plans, it wouldn’t have buried the news on Memorial Day weekend and given reporters just 10 minutes to ask questions.”

And Biden had reason to want his defense budget ignored. It is a woefully inadequate budget to face the multitude of growing external threats facing the United States. Think expansionist CCP China on a military building binge, Putin’s Russian military adventurism as close as Hawaii, and in the Arctic, space and cyberwarfare, Iranian terrorism and possible nuclear weapons, and terrorism, etc., etc.

Yet, Team Biden has been absurdly touting ‘white supremacist extremists’ as the ‘number one threat’ to the homekand and ‘Climate Change’ as top national security threat.

When the Office of Management and Budget released its [total U.S.] 2022 budget request, President Joe Biden stated, “Where we choose to invest speaks to what we value as a Nation.”

On that basis, the Biden administration does not value the United States armed forces. [emphasis added]

While Biden is proposing an unprecedented and fiscally unsustainable $6.4 TRILLION national budget, the Pentagon will only get $715 billion, which is less, adjusted for inflation, than President Trump’s defense last budget. As Bartels notes:

Biden’s budget reflects more interest in an unprecedented expansion of the federal government than adequately funding the military. Priced at a whopping $6.4 trillion, this budget request, adjusted for inflation, costs more than World War II and one decade of Obamacare combined.

Most defense leaders believe the U.S. needs a defense budget that is consistently 3% to 5% above inflation for several years to be ready for great power competition, primarily with an increasingly dangerous and belligerent China, but also potentially with Russia.

Biden’s budget has effectively shrunk the Pentagon’s purchasing power when it could least afford it. Because of this, our military leaders were forced to make painful tradeoffs.

These tradeoffs included shrinking the Navy and Army at a time when both should be increased and cutting ‘legacy systems’ we need to fight a war today and tomorrow, to invest in future defense tech for a possible war ten years from now.

Further moving away from its mission of “providing the military forces needed to deter war and ensure our nation’s security,” Biden’s budget proposes to carve out $500 million to go toward pandemic preparedness and $617 million to address, prepare, and adapt to climate change.

This is partially how the Biden administration is attempting to redefine the meaning of national security. ADN

LISTEN UP…PREZ BIDEN Does NOT CARE ABOUT ALL AMERICANS. HE CARES About the DEMOCRAT AMERICANS. ALL OTHER AMERICANS are LEFT OUT. If that is NOT DISCRIMINATION….WHAT IS???? From SamuraiQueen. 😄😄😄

I do not think QUID PRO QUO Joe Biden is capable of loving anyone but his Clan of Biden Grifters.. It is obvious that he loves, adores, adulates and grovels for the Illegal Invasion of Aliens and criminals and Gang Members and drug dealers and other assorted criminals.that he has invited from all over the World to come and Parasite off of the American Taxpayers even as Biden has shut off our energy sources, shut down our military, stopped all mining of resources ,raised our taxes, inflated our currency to cause run away inflation and put us into more debt than we can ever repay. Joe especially feels hatred toward Republicans..

Buck Fiden and ALL his Minions !

The military brass could start trimming its spending by throwing out class warfare propaganda training and it’s supporting staff.

Joe’s staff is the largest and most expensive in the History of the Republic.. Kamal has 22 staff also a record and most of their salaries are kissing 200,000.00 per year each.. Kamala does nothing –maybe crocheting afghans but she sure avoids the Border and the Invasion of illegal aliens.

Biden has to go and go now! Get rid of him anyway possible.He is a deterrent to our Country. He has to go now! Please! Our country depends on it. Kamala has to go with him.

From your lips to God’s ears, cozy!! Please dear God, hear our plea!

The military might think about cutting the transgender operations … CRT training … and the other “new” BS designed to cause division between our military members… our citizens that go into the military are willing to give their lives for our freedom, that Joe is giving away … just when will they turn on him, Shoomer, Poloski, & “the squad” (& the RINOs) ????? How quickly could we have a special election, if DC were Nuked?

they will turn against him when the money runs out. And soros has quite a bit left.

The biggest threat to the National Security is President Biden, his Administration, the Entire Cabinet Members They are killing America.

That’s what they want

ALL DAMN DEMOCRATS ARE REJECTS! REJECTS ARE THE TRUE THREAT!

Joe Biden and all of his evil minions are the criminals, not President Trump.

bidenbiden is the bane of our country; in my many years, I have never witnessed a pedophile in high places, let alone our Presidency. Have seen too many of his moves towards young girls—he’s tawdry and doesn’t belong in our political society.

Hey Joe Blow, you bet the sworn enemies of the USA are watching your every move and making plans as you lapse in due diligence and preparation.

Other Countries are watching Joe so they can get a laugh they know he’s Senile.

Biden has committed so many criminal acts since he was installed in the OVAL office.. He also is still committing illegal acts when he accepts payment as the BIG GUY from our sworn enemies.. Since he handed Putin the list of 17 facilities in the USA not to be hacked– They just hacked one of them.. Why did Joe hand over such a list if he is loyal to the USA? He is a subversive and needs to be put where he cannot spill our secrets to the enemy that he ahs been accepting money from through Hunter the Bag man and money launderer.

“Biden’s” Defense Budget is the Gravest Threat to US National Security – Not ‘Extremism’ or ‘Climate Change’ - Dr. Rich Swier

[…]  ‘Biden’s’ Defense Budget is the Gravest Threat to US National Security – Not ‘Extremism’ or ‘Climate Change’ https://americandefensenews.com/2021/06/21/bidens-defense-budget-is-the-greatest-threat-to-us-nation&#8230; […]

Biden is the gravest threat to the U.S. National Security.

Joe and his administration doesn’t want Americans to know what he is doing or going to do because they know it’s not right. America Last

Biden is willing to sell out the USA to his “friends” like communist China and not telling
how many other communist countries. HE IS NOT TO BE TRUSTED!

The democrats same old rhetoric, and then it takes the republicans to bail out this country from the damage done to it.

Why would Biden’s defense budget be any less damaging to our National Defense than that of the Obama-Biden administration? President Trump and the Republicans had to dig us out of a deep hole created by Obama-Biden. That caused a huge increase in the Federal deficit, because Democrats wouldn’t agree to the needed reduction in domestic spending. Now Biden and the Democrats are repeating the same damaging policy.

LISTEN UP…PREZ BIDEN Expects the U.S. MILITARY to FIGHT with STICKS and STONES and NOT Be UPDATED. HE is THROWING SCRAPS at THEM and NOT GIVING THEM HIS BEST. WHAT Can YOU EXPECT from a DEMOCRAT. From SamuraiQueen. 😄😄😄

THIS BUDGET IS EVIDENCE OF TREASON!