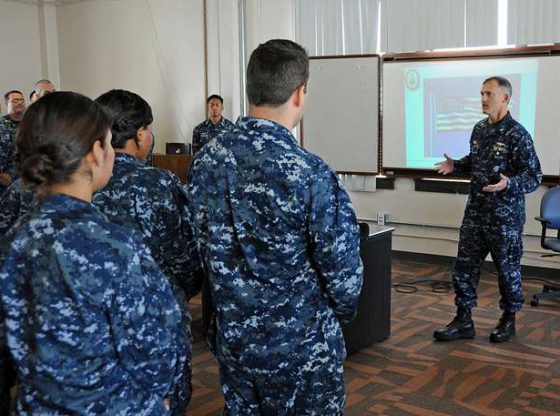 Amidst the exploding concern over President Biden’s woke Pentagon subverting and weakening America’s military, the only conservative member of the newly formed Countering Extremism Working Group (CEWG), is sounding the alarm about the Pentagon’s dangerous full embrace of “wokeism.”

He calls it part of America’s new ‘cold civil war.’

In doing so, Mike Berry, an attorney and Marine Reserve officer, is risking his position in the CEWG and possibly his career in the Marines Reserves.

In a June 19 OPED in the Washington Examiner, Berry writes:

For starters, President Joe Biden recently declared that white supremacy poses the greatest threat to America’s national security. The Pentagon is taking the commander in chief at his word. Instead of monitoring external threats, the Pentagon is on a mission to identify and remove whomever it labels as extremists from America’s armed forces. Ironically, the CEWG has yet to define what it means by “extremism.”

Extremism is usually defined as the threat or use of violence to achieve an ideological agenda. But the Pentagon is now poised to expand upon that definition to include constitutionally protected speech. In other words, sticks and stones may break our bones, but words are the biggest threat.

This should be alarming to everyone, no matter their political persuasion. If the Constitution no longer presents an impediment to appeasing the woke commissars on the far Left, it won’t be long before speech that has always been protected by the First Amendment suddenly becomes criminal. My law firm, First Liberty Institute, is already seeing some disturbing signs.

An Army chaplain used his personal social media account to express support for then-existing policy banning those who identify as transgender from serving in the military. The Army relieved him of duty and accused him of “illegal discrimination.”

That’s right, the American government now monitors social media activity in order to ensure service members don’t post, share, or like something “extreme.” If this sounds eerily familiar, it’s because China has been doing it for years.

Meanwhile, service members publicly protested that same [Trump-era] policy, in uniform [in 2019 when it was the law], and nothing happened. If the CEWG does not adequately account for service members’ constitutional rights, we can expect many more struggle sessions to follow.

While ‘wokeism’ in the Pentagon has dangerously mushroomed under Biden, this isn’t a new problem. Berry notes in the Examiner:

Several years ago, the Department of Defense produced a document that labeled those who believe in “states’ rights, individual liberties, and how to make the world a better place” as potential extremists. Apparently, I was mistaken for thinking those were the things I was defending as a Marine. And despite data showing that religious people are the most likely to serve, we are now declaring them undesirable extremists.

All of this is a recipe for disaster. America has real enemies who seek to harm us, and those enemies are likely giddy with every woke pronouncement that America will continue to pour yet more valuable time, energy, and resources into its cold civil war. ADN

Imagine the outrage if the word ‘black’ was substituted for ‘white’.

It sickens me to see how easily so many Americans allow themselves to be convinced that their behavior manifests racism and bigotry. What’s worse is they’re convinced by a pack of democrat hyenas who would enslave us all by implementing their radical socialist form of government.

If you listen closely to Biden, and watch him closely, you will realize he is himself one of those he calls the greatest threat. He is a White supremist. Someone should call that to his attention. He should be impeached for a lot of things. Make that one of the chief charges, being a White Supremist.

Our troops will be marching into the next war singing the jaunty tune ” Oh, what a lovely war”.

And we won’t be going to war with any other country unless they are of the white race! We don’t want our military to be called racist now do we!

If your plan is to take over a government dictator style then you will need the backing of the military. This is what is behind the democrat wokism for the United States Military. I cannot believe that Generals, Admirals and top military brass buy this wokism BS. As usual they are protecting their careers not us.

I proudly served during the Viet Nam era, some of my best compadres and most trusted men in the company was of different nationalities. We looked at each other as partners and brothers. We would kill and would die to protect each other. This is all political BS, in the service you are taught to work as a unit, there is no color involved. This political BS is weakening our military, making hatred and untrust of each other the new norm, its time to stop this before its to late, either by the military refusing to fall into this trap, impeaching those in charge, or by a Constitutional Convention of States to reset our Government to what the founding fathers invisioned , All Men ( and women ) created as equala !

OK…to protect the modesty and decency of our military women, our old, as well as Biden’s new Leftist controlled military agrees that it right to separate naked men from naked women in the showerd. So, just explain to me … just why is it just fine with this sick Democrat Commander-in-chief to force ‘real’ military ‘men’ to shower with Homosexuals, Bi-sexuals and the litney of other Democret Sick-Sexual Perverts ??

All it took was a rigged election of a buffoon to the presidency who had the power to install every American hater to positions of power in the government. The Deep State is now openly in charge. The Supreme Court hasn’t lifted a finger to protect the citizens.

Racism has become one of the greatest enemies of America. The dimwit in OUR house can’t even tie his own shoes let alone lead a nation. We have communists in the WH and in Congress and libs better wake up and throw this “woke” bs in the garbage. Our military needs to be strong not waiters and also when I was in the Navy gay were thrown out and now we have transgender. I really don’t want to learn Chinese or Russian but at the rate the military is going they may be our teachers.

Scary what this cognitively challenged old man is doing to our military and NASA. Will a military whose major attribute is their wildness really be able to defend this nation? Rhetorical question folks, we all know the answer!