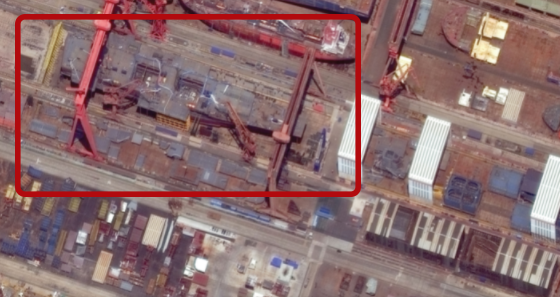 In April I wrote about China’s recently launched, and much-maligned, two ski-jump carriers. I noted that: ‘While many U.S. and western naval analysts mock China’s two (first-generation) ski-ramp medium carriers as a bit of a joke, they miss the point that they have a role, like our America-class amphibious assault ships, and are also test beds for China‘s real carriers being built.”

I added that satellite images are revealing that the next, more advanced carrier, Type-003 still under construction at Jiangnan Shipyard in in Shanghai, will be a monster. Based on more current information, the Type 003 carrier could end up with a length of about 1066 ft (325 m) and a width of 263 ft (80 m).

Interesting configuration and size estimation based on what is known so far for the Type 003 carrier.

As I noted, this Type 003 conventionally powered warship is expected to be CCP China’s first “catapult assisted takeoff but arrested recovery” (CATOBAR) carrier. Whether they will perfect the electromagnetic aircraft launch system (EMALS) troubling the U.S. Ford-class supercarrier, or end up using steam catapults, is still an open question.

A more recent analysis by three experts at the Center for Strategic and International Studies (CSIS), based on updated imagery, is now provides more visual context and technical information on the progress being made on this ‘monster.’

Recent commercial satellite imagery reveals that China has made substantial progress in the construction of its third aircraft carrier, commonly known as the Type 003. The vessel is slated to become the largest surface combatant in the Chinese People’s Liberation Army Navy (PLAN) and significantly upgrade China’s naval capabilities.

…Satellite imagery from May 30, 2021, shows that the flight deck is now partially complete. While much remains to be done, close analysis of the Type 003’s status offers key insights about its configuration.

China has made substantial progress in the construction of its third aircraft carrier.

Commercial satellite imagery from May 30 shows that the flight deck is now partially complete, offering insights about the vessel’s configuration. https://t.co/4dfJpdrUOz pic.twitter.com/tB8B8hyTwB

While the CSIS experts assess that it has two elevators, others ask if the Type 003 may have three?

If true an indeed interesting news but I must admit I’m not yet convinced.🤔 https://t.co/J3WGHYFnJR

The CSIS authors then add:

The increased size of the Type 003 paired with an improved launch system opens the door to a larger and more diverse carrier airwing. While it will be a couple of years before aircraft find their home on the Type 003, the airwing may include airborne early warning and control (AEW&C) aircraft, such as the KJ-600. Should this materialize, it would significantly enhance the PLAN’s situational awareness and warfighting capabilities.

The Type 003 is also expected to benefit from an upgraded island—the tower structure housing the command center for flight deck operations, along with radar and communication equipment. Compared to the Shandong, the Type 003 will likely have a smaller island, which would free up crucial real estate on the flight deck.

In the satellite imagery from May 30, 2021, a portion of the island can be seen located near the vessel, tucked between two movable environmental shelters. Low-altitude aerial imagery of Jiangnan Shipyard from June confirms the presence of the island at Jiangnan.

Other images are seen here:

The first clearer image of the Type 003 aircraft carrier’s island.

I must admit I’m surprised where images of the Type 003 carrier can be found, but Tik Tok was not a place I expected. 😳

The CSIS experts speculate that, “If work on the third carrier progresses at roughly the same pace as the construction of the Shandong, the Type 003 may not be launched until 2022. After launching, it will be several years before the vessel is fully fitted out, completes sea trials, and is then commissioned into the PLAN.”

Meanwhile, The Drive reports that:

Unconfirmed reports last year suggest that work on PLAN’s next carrier — the Type 004 — was due to start soon, possibly at Dalian Shipyard in Liaoning. There are persistent rumors that this vessel will be both larger than its predecessors and will be nuclear powered, but other assessments suggest it will utilize the Type 003 design. Ultimately, however, it seems likely that nuclear power will be the PLAN’s goal.

Western reports have frequently speculated that the PLAN may eventually build a force of six aircraft carriers. On the other hand, other observers claim that Beijing ultimately plans for “10 or more” carriers, which would clearly be a much longer-term ambition. ADN

LISTEN UP….CHINA Can Have MORE MANPOWER…MORE TECHNOLOGY etc etc. The ONE THING THEY Do NOT Have…..is the BLESSING of GOD. With GOD’S BLESSING a PERSON Can ACCOMPLISH and CONQUER ANYTHING. IS ANYTHING IMPOSSIBLE for GOD????? From SamuraiQueen. 😄😄😄

However, do we still have any blessings with all the evil in our governments???

Exactly. Look how God spanked Israel over and over for doing things that were “destestable” to Him and being “stiff necked”. Just read the Old Testament. The moral decay of the US is apparent to those with eyes to see. Makes the absence of any reference to a country like the US in Revelation during the end times.

…reference to a country like the US in Revelation during end times relevant. The US will be insignificant when the end times arrive. Our fate will be decided long before the tribulation. Perhaps the Antichrist will even come from the US, although more likely not.

Long ago Hal Lindsey in The Late Great Planet Earth seemed flummoxed because there was no apparent mention of the US in the Armageddon in the Book of Revelation. There were kings of the North, South, East, etc. but where was America? Americans will be too preoccupied with more important matters, such as: deciding who belongs to what gender, who gets to use which rest room, who is a racist and who is not, and who in entitled to ‘free stuff’ provided from the funds confiscated by a cruel government from those who are foolish enough still to work for a living. Oh, and let’s not forget: at which point a living fetus constitutes a ‘human being.’ Catch my drift? Following our present course, WE will be erased from history.

China probably has the plans to our Ford class carrier’s. The Chinese are good at improving things. A carrier the size of the 003 will drink fuel. They will not worry about pollution so to save money the Chinese may go back to the bunker”C” to feed their boilers

Gee it would be a shame if it accidentally blew up while still under construction…several times.

Maybe they will be more dependable that the usual crap made in China.