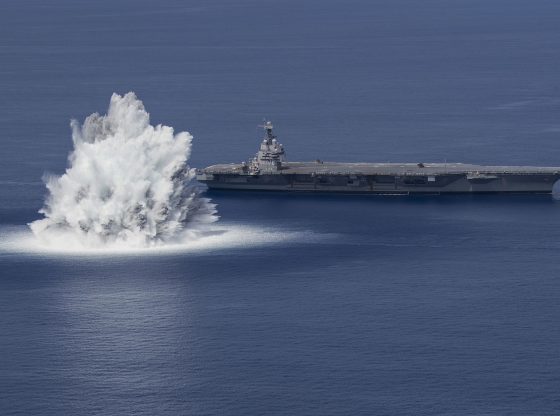 America’s newest and most powerful supercarrier, the USS Gerald R. Ford (CVN-78) has just completed the first scheduled explosive event of its ‘Full Ship Shock Trials’ while underway in the Atlantic Ocean, 100 miles off the Florida coast. According to the U.S. Geological Survey, the blast registered as a 3.9 magnitude earthquake.

US Naval Institute (USNI) News reported that the “Navy blasted its newest carrier with thousands of pounds of explosives in the Atlantic Ocean on Friday to simulate how the ship would perform in battle conditions, according to images released by the service and government earthquake monitors.”

Wired with sensors to measure the effects of the shock, USS Gerald R. Ford (CVN-78) was hit with the blast just before 4 p.m. Friday.

The official Twitter account for USS Gerald R. Ford tweeted Saturday that “the leadership and the crew demonstrated Navy readiness fighting through the shock, proving our warship can ‘take a hit’ and continue our mission on the cutting edge of naval aviation.”

#Warship78 completes the 1st explosive event of Full Ship Shock Trials! The leadership and crew demonstrated #NavyReadiness fighting through the shock, proving our warship can “take a hit” and continue our mission on the cutting edge of #NavalAviation!@USNavy @NAVSEA pic.twitter.com/dAmh70n509

See video of the impressive and massive explosive display here:

According to a 2007 MITRE study, nearby explosions, even when vessels were not taking direct hits, would send destructive, high-pressure waves toward them.

During the major global conflict, “it was discovered that although such ‘near miss’ explosions do not cause serious hull or superstructure damage, the shock and vibrations associated with the blast nonetheless incapacitate the ship, by knocking out critical components and systems,” the study said.

USNI News noted that “Shock testing the first-in-class Ford, rather than second-in-class John F. Kennedy (CVN-79), was driven in Congress by the late Sen. John McCain (R-Ariz.). He insisted on the trials to prove the reliability of the new carrier class before its first deployment.”

“The first-in-class aircraft carrier was designed using advanced computer modeling methods, testing, and analysis to ensure the ship is hardened to withstand battle conditions, and these shock trials provide data used in validating the shock hardness of the ship,” the Navy said in a Saturday statement.

The carrier was scheduled for three separate explosions, but the service may cap the tests at two blasts, according to USNI News. Mission Accomplished. ADN

seriously these explosion showed no big waves love to see the data on the true shock values these test are supposed to generate and any unintended consequences of these tests, which you will never hear about

Reminds me of my friend’s brother-in-law who tested an ammo box for leaks. He put his expensive camera inside and immersed it in the bathtub. It leaked.

That was quite an explosion…. wonder what actual force hit the ship…. The explosion went omni-directional. the ship’s wake could have decreased the pressure put on the vessel. I am no engineer, but, seems to me that is missing some data or the test could be improved

Did that contribute to the building collapsing in FL?