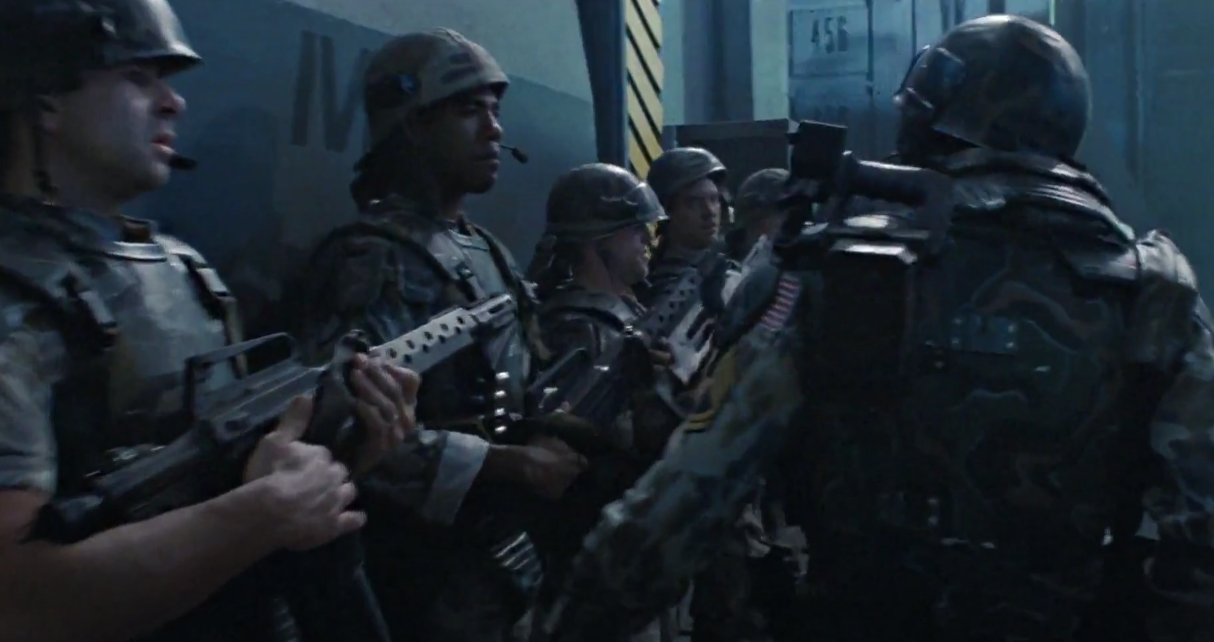 ANALYSIS – At last week’s U.S. Naval Academy-sponsored conference NavyCon 2021, an aerospace expert concluded that ‘ground troops’ use in space – a domain that lacks actual ‘ground’ – would be extremely limited and would be extremely expensive to train, equip, and transport. So, according to him, Space Marines aren’t happening now, or in the foreseeable future.

As a Space Marines advocate, I must strongly disagree. The U.S. will eventually have Space Marines. It is just a matter of time.

Why? Because we will need them. While space doesn’t have much ‘ground,’ this domain is more akin to the sea than the sky.

In a paper for NavyCon titled“ In Space, No One Can Hear You Oorah,” systems engineer Brian Kirkpatrick quashed the hopes that Colonial Marines from the Aliens movies and Warhammer 40,000 games could become a reality.

Kyle Mikozami writes in Popular Mechanics that while President Trump’s establishment of the U.S. Space Force in 2019 was a major step forward, the idea of deploying troops in space is “probably not” ever happening, according to Kirkpatrick.

In order to get into space, you need to fly through the air, which technically makes it an extension of the Air Force’s domain.

On the other hand, spacecraft and spaceflight is in many ways more similar to how the Navy operates in its own domain. For more than half a century, no single service was able to lay a decisive claim to space, and today’s Space Force operates under the Air Force in the same way the Marine Corps operates under the Navy.

But there’s a service missing in the tug of war over space: the Army. Space has a distinct lack of territory for ground troops to fight over. At the minimum, the “ground” is 200 miles below, on Earth. That hasn’t stopped sci-fi writers, however, from drumming up space ground troops, or “Space Marines”—those laser-wielding warriors typically depicted on alien planets long after normalization of interplanetary travel.

Unfortunately, these experts fail to realize that U.S. Marines aren’t the Army. Marines aren’t just ground troops. On the contrary, they are expeditionary warfighters founded as ship-borne raiders and naval boarding parties.

In this way, ‘Space Marines’ would be perfectly suited for the task of raiding enemy spacecraft, satellites, or moon bases in the not-too-distant future.

And Kirkpatrick indirectly acknowledges that reality, according to Task & Purpose, when discussing disabling enemy satellites in a non-kinetic way without creating dangerous debris: “A space marine with a pair of wire clippers or bolt cutters is going to be able to do a lot of damage to any possible satellite,” Kirkpatrick explained. “It doesn’t actually take lasers. And all of those attack mechanisms will not be destructive,” meaning non-debris generating.

However, getting the ‘Space Marines’ to and from the communications satellite is the real challenge, notes Kirkpatrick.

As of now, there is no small vehicle that could take a small fire team of four Marines up to geosynchronous orbit, support them exiting the vehicle for a spacewalk and take them back to Earth. Aerospace manufacturer Boeing has proposed plans for an X-37C, a human-rated version of the X-37B test vehicle used by the Air Force, which could carry up to six astronauts, Kirkpatrick said.

There is also the Sierra Nevada Corporation’s “Dream Chaser,” which could carry seven astronauts. However, no such vehicle has been flight-proven or human-rated at the required scale.

But with the pace of modern technological developments, even Kirkpatrick admits that things can change. He was surprised by the Air Force’s recent announcement that it would invest $48 million in a “rocket cargo” platform that could transport a crew of special operations troops anywhere on Earth in an hour.

So, yes. The U.S. will have Space Marines. It’s just a matter of time. Ooorah! ADN

The Dems are going to be pretty interested in the variety of pot this author has been smoking. If they can get it around to everyone it will make their complete control of this nation a sure thing.

They are not Marines. Their title is Guardians. Different, but equally heroic.

Who should be surprised, you’ve already got a totally devoid of morals ‘space cadet’ in the White House. He was cheated into the presidency and, apparently the once great United States cannot do anything about this criminal act. This is what happens in sociolist banana republics like Venezuela.

We need to be able to storm or destroy a future Chinese moon base, or even the current Chinese-only space station; to ensure that bio-weapons are not being developed in secret up there. Space is a great place for the Chinese or other rogue nations to develop bio-weapons, since far fewer of their own people get infected in case of a laboratory accident.

[…] laser-armed combat Space Marines some of us are hoping to eventually see, and I have written about here and here, but it is a start. Nine months ago, Marine Corps Commandant Gen. David Berger ordered […]