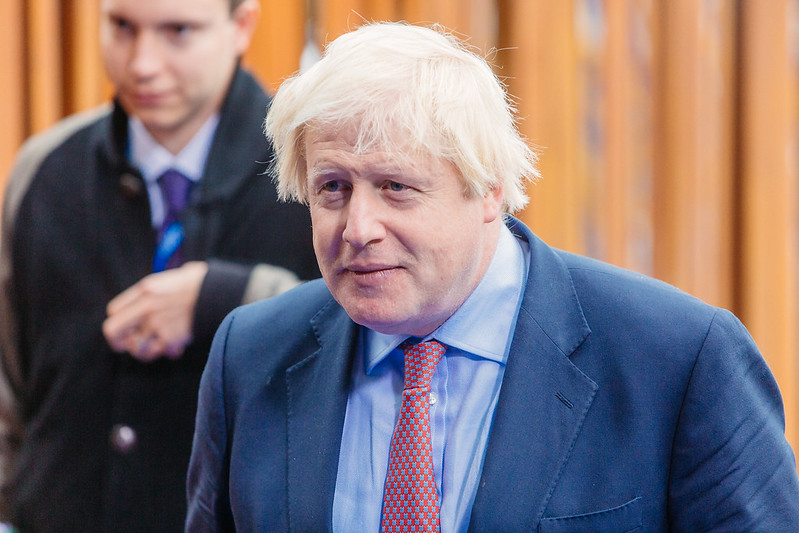 Yesterday reports swirled about the supposed confrontation between the British Type 45 air-defense destroyer, HMS Defender, and Russian military forces near the coast of Crimea on the Black Sea. I called it an ‘information war,’ as Russia claimed it had fired warning shots, and dropped bombs near the British ship, while the UK denied it.

The details of the alleged incident are still murky, but Russian military claims of a Russian-initiated confrontation may be more accurate than the UK initially admitted.

But ultimately, the event did demonstrate one thing – that the UK’s Boris Johnson schooled America’s Joe Biden on how to deal with Vladimir Putin.

As Tom Rogan wrote in the Washington Examiner:

The lesson came via the Royal Navy’s deployment of its Type-45 air defense destroyer, the HMS Defender, within 12 nautical miles of the Crimean coast. Twelve miles marks the delineation point between international waters and sovereign waters. Since its military seizure of Crimea in 2014, Russia has asserted that the territory is Russian.

Put another way, that the 12 miles of water surrounding Crimea are as Russian as the 12 miles of water off Vladimir Putin‘s home city, St. Petersburg. The point of this naval deployment was to reinforce the British government’s, and international community’s, contention that Crimea is Russian-occupied Ukrainian territory. It’s a point that requires emphasis.

After all, the Biden administration has shown distinct weakness in contrast to the British action. The Biden administration recently canceled a U.S. Navy deployment into the Black Sea for what one official told Politico was “a ‘myriad’ of reasons, including a desire not to provoke Moscow during a delicate time.”

I wrote about Biden’s April ‘cave in’ to Putin threats against the planned U.S. two-warship transit of the Black Sea on April 16, noting that:

…after being threatened by Russian leader Vladimir Putin, the Biden administration has embarrassingly canceled the planned deployment of two U.S. warships to the Black Sea near Ukraine. This sends a horrible signal of weakness amid Russia’s massive military buildup and blustering on Ukraine’s border, and diminishes the impact of the Russia sanctions announced Thursday.

Earlier, on April 13 I noted that Russia called the United States an adversary and told U.S. warships to stay well away from Crimea “for their own good,” calling their deployment in the Black Sea a provocation. And it appears, despite his strong anti-Russia rhetoric and bombast, President Biden blinked.

In this latest incident with HMS Defender, Boris Johnson didn’t blink. Instead, he displayed the old British spirit and an infuriated Russian military reportedly swarmed Defender with ships and aircraft. But this simply gave the Brits the opportunity to test their advanced Sea Viper air defense system in ‘near battle’ conditions.

Rogan noted that he was told that the Defender was able to successfully track all Russian forces at all times during its transit.

The Royal Navy will likely share with the U.S. Navy its radar and sonar data and its monitoring of Russian tactical decisions. The United States will be particularly interested in the data because China‘s People’s Liberation Army-navy and Army-air force would likely employ air-saturation strike tactics during any South China Sea conflict.

The bottom line? Britain has shown that it can still go toe to toe with a peer adversary, and Johnson showed Biden how a true world leader behaves when dealing with thuggish opponents. ADN

LISTEN UP…I Believe the UK Over RUSSIA. RUSSIA Has NOT Been COOPERATIVE on the COMPUTER HACKING. INTEGRITY MATTERS. THERE are SOME COUNTRIES Who SWORDFIGHT Below the BELT. THEY FIGHT Without HONOR. From SamuraiQueen. 😄😄😄

So KGB Putin is playing semantic games with Her Majesty’s Navy well outside of Russian waters… How interesting! Boris (with his Russianate name) had the TRUTH in his corner and he has c.o.j.o.n.e.s. Biden (rhymes with hidin’) has none, or if he has, without the cognition to exercise them! Fellow Americans, we must have better than that!

[…] my three earlier pieces on the British-Russian naval confrontation on the Black Sea, or the information war about whether there was a confrontation, I noted that […]

Biden is a coward PUKE!