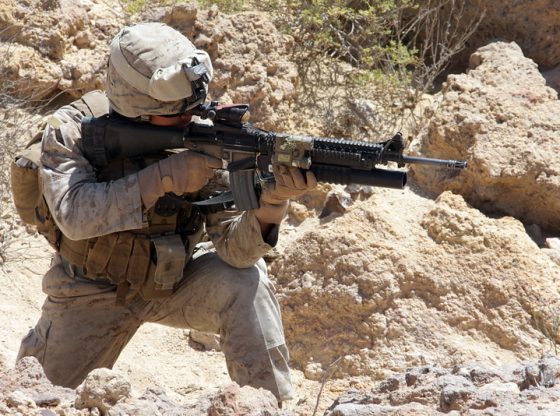 This range focused on fire and maneuver and buddy rushes, helping the Marines stay sharp on the importance of good communication and the use of hand and arm signals. (US Marine Corps photo by Sgt Andrew J. Carlson)

Today’s PDB includes a variety of critical issues such as – The Army’s updated policy for transgender soldiers. Black Sea incident shows Russia’s determination to claim waters illegally. North Korea would have no chance against the F-35 in a war. US to begin evacuating some Afghan nationals as they await visa approval. Calls grow to evacuate Afghans to Guam as US troops leave.

US troops on base are less likely to seek extremist content than Americans in general, study finds.

Why Nellis Air Force Base held its first ever drag queen show.

India, US navies hold complex air and sea drills in the Indian Ocean.

US troops on base less likely to seek extremist content than Americans in general, study finds. Service branches differ in their engagement with anti-Black extremism or anti-Semitic conspiracy theories, internet research firm says in upcoming report.

Military daycare spending would see a big increase under House proposal. About $213 million would be set aside to develop and build child development centers on military bases.

This is the Army’s updated policy for transgender soldiers. Transgender individuals are once again welcome to serve in the U.S. Army, and do so in their self-identified gender, the Army announced on Thursday.

US State Dept OKs possible sale of F-16s, missiles to Philippines. The U.S. State Department has approved the potential sale of F-16 fighter jets, as well as Sidewinder and Harpoon missiles, to the Philippines in three separate deals with a combined value of more than $2.5 billion, the Pentagon said on Thursday.

India, US navies hold complex air and sea drills in the Indian Ocean, kicking off several summer exercises. The U.S. Navy carried out a high-tempo exercise this week in the Indian Ocean involving the Ronald Reagan Carrier Strike Group along with the Indian Navy and Indian Air Force.

Black Sea incident shows Russia’s determination to claim waters illegally. The British warship was conducting a freedom-of-navigation exercise when it was harassed by Russian forces.

North Korea would have no chance against the F-35 in a war. None. The F-35 Lightning II has emerged as one of the world’s premier multirole fighter aircraft, with the U.S. Air Force now operating more of the fifth-generation aircraft than any other fighter model other than several variants of the long-serving F-16.

US to keep about 650 troops in Afghanistan after withdrawal. Roughly 650 U.S. troops are expected to remain in Afghanistan to provide security for diplomats after the main American military force completes its withdrawal, which is set to be largely done in the next two weeks, U.S. officials told The Associated Press on Thursday.

US to begin evacuating some Afghan nationals as they await visa approval. White House officials have not said how many individuals will be moved or where they will be housed while they await a final decision.

Calls grow to evacuate Afghans to Guam as US troops leave. Despite unusual bipartisan support in Congress for evacuation of Afghan interpreters and others who helped the U.S., the administration hasn’t agreed to such a move.

After Trump Said He is Visiting Border Next Week, VP Harris Suddenly Says She is Going First
Biden’s Afghan Disaster Will Haunt Him and Democrats for Years – Just Like Vietnam and Obama’s Iraq Surrender

Kreakin freaks and the anti-American democrats and medias sure know how to make American military the laughing stock of the world to loose America’s respect and might!

Putin Laughs at America , So does Iran , So does China . Tell Commanders , why fight American Forces , They are Destroying Themselves .