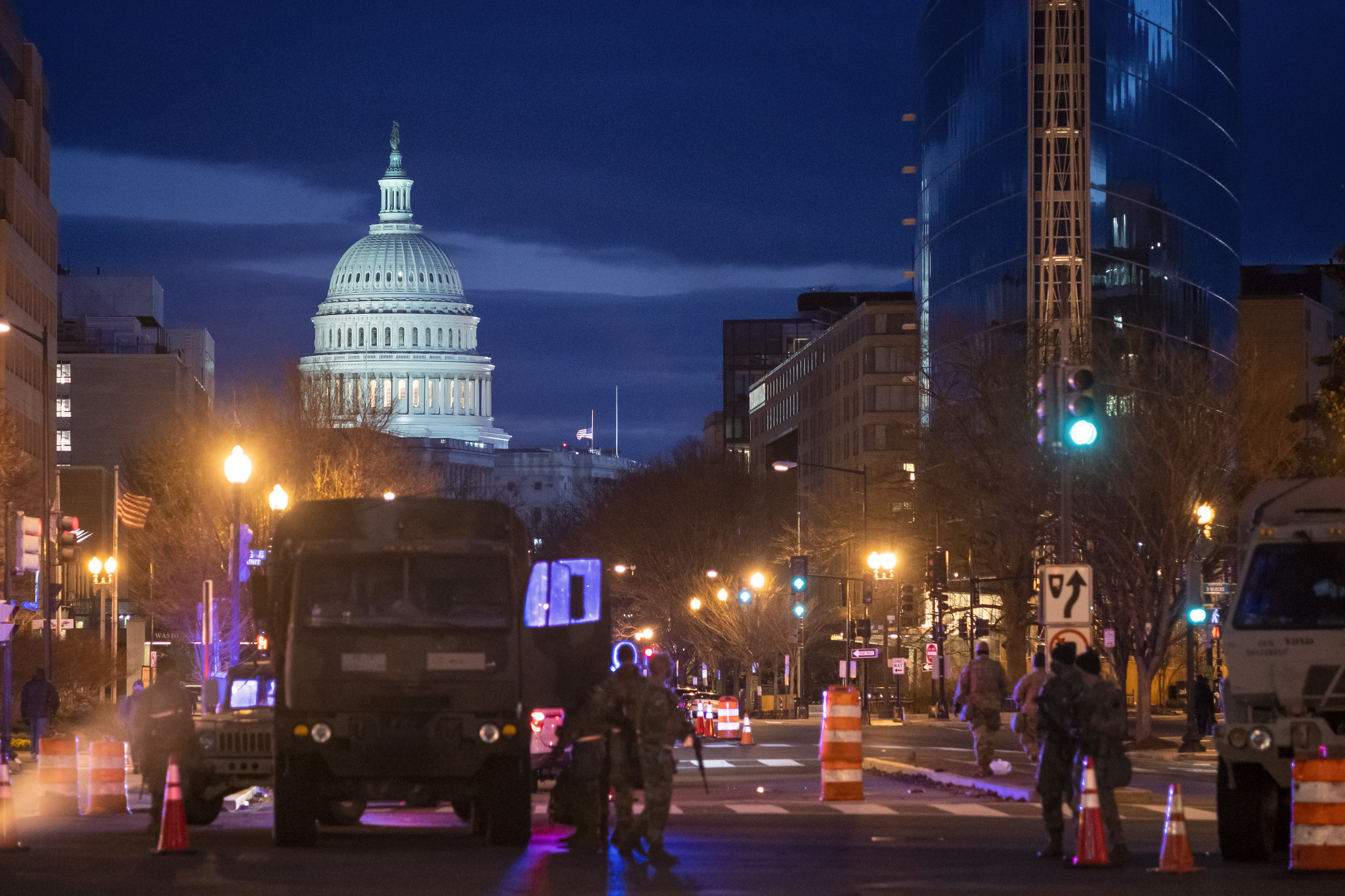 ANALYSIS – The overwhelming partisan and establishment media-enabled narrative about the, at times violent, but essentially unarmed, mob that stormed the Capitol on January 6 is that it was a ‘seditious conspiracy’ to overthrow the government – an ‘insurrection.’ I have argued against this absurdly overwrought narrative from day one, especially since I was present at the Capitol on the afternoon of the riot.

I argued that the ‘siege’ was not a coup or insurrection – but criminal, just like the Left’s rioting, and wrote:

I was at the Capitol yesterday as an observer. While the vast majority of tens of thousands pro-Trump protesters during the day were patriotic and peaceful – even if a bit frenzied – most of those several hundred who rushed onto the Capitol building were neither.

Some simply got caught up in the mob rush, but many were goons and criminals, and yes, ‘terrorists.’ No better than Antifa or BLM, or the #NotMyPresident rioters who disrupted Trump’s Inaugural four years ago. Some were likely infiltrated left-wing instigators.

Here I used the textbook definition of ‘terrorism,’ of using violence or intimidation for political purposes, not any legal one, since in the United States we don’t have any laws against ‘domestic terrorism.’ But my point is that if this term is used against the Capitol rioters, it must be used against all the violent BLM/Antifa rioters as well.

More importantly though, to date, six full months after the event, the Biden Department of Justice (DOJ) has not charged one person with ‘sedition,’ or ‘Insurrection.’ Since “sedition” is the “incitement of resistance to or insurrection against lawful authority,” it is the key to making a case that this was in any way an ‘insurrection.’

An “insurrection” is generally defined as the “act of revolting against civil authority or an established government,” usually violently. The crime in the U.S. is laid out in Title 18 of the U.S. Code, section 2383 – ‘Rebellion or insurrection.’

But, as CNN notes:

In the weeks after the January 6 insurrection at the US Capitol, the Justice Department looked at the possibility of pursuing charges under the rarely used seditious conspiracy law.

Since then, and particularly since the start of the Biden administration, skepticism among top officials has made that possibility increasingly unlikely. Instead, prosecutors have turned to traditional obstruction, conspiracy and weapons charges that could yield prison sentences similar to a novel sedition charge.

Why? Because the charge won’t stick.

Sedition charges under the seditious conspiracy law are extremely rare. In modern history, Federal prosecutors were only successful in using the law against violent armed Puerto Rican separatist terrorists in the 1930s.

More recently, in 2010, prosecutors charged members of a Christian militant group called the Hutaree with seditious conspiracy but a federal judge dismissed the charges, notes CNN.

Some Biden administration officials also believe using the sedition charge could further politicize DOJ’s prosecution of the Capitol attackers, about 500 of whom are already facing charges. So, instead, and more appropriately, the department says nearly 200 of those 500 defendants have been charged with obstructing the congressional proceedings on January 6.

Others are charged with felonies for assaulting police, taking weapons to the Capitol grounds (not necessarily inside the Capitol itself), or destroying property.

Those are all a very far cry from ‘sedition,’ or ‘insurrection.’ Let’s call January 6 what it was, not an ‘insurrection,’ but a violent, criminal riot. ADN

You are totally wrong, The blame falls totally on the corrupt FBI and the Corrupted Democrate party and News Media for for hiring BLM protesters and staging the fake break-in.

Exactly. We saw the videos. The busses arrived with Antifa and glass began to break. Others were let in the building after the Police removed the barricades and told the crowd that Trump said it was alright to go in.

“terrorists.’ No better than Antifa or BLM, or the #NotMyPresident rioters who disrupted Trump’s Inaugural four years ago. Some were likely infiltrated left-wing instigators.”

Those were paid rioters and not Trump related at all. This investigation is and always has been to persecute those who support(ed) Trump…political persecution by the Liberals!

Yes! Paid Rioters dressed up to look like Trump supporters and told to break in the building! The person who orchestrated that break in is Nancy Pelosi using her Attack Dogs, BLM and Antifa, to frame DJT so she could “Impeach” him one more time!

Her HATRED for DJT is so huge that it controls her actions and life! She is one of the biggest problems that tried to destroy our President Trump! And she must be removed from her position ASAP! She is a wicked cancer that just keeps spreading. Time to radiate her…

God will radiate the vicious old shrew soon enough. Then she must leave behind all her ill-gotten gains and her gourmet ice cream and enter eternity, where she will face Judgment.

Time to stop the lies. They were invited in, no one was hurt except Ashli Babbitt who was murdered in cold blood! BLM looted and burned our cities all summer and you call that a riot over a few broken windows? By the way, that building belongs to the people who broke a few of their own windows! Not a riot or insurrection!

YOU MR. BART ARE RIGHT ON WITH THAT.

I want to know the name & background of the man that was busting out the glass on the Capital building with a shield and signaling others to rush in. Why was he not charged for violence & damage? His face is clear on the video.

Totally disagree with the term “terrorist” being applied like a blanket to this situation!!! These people were there to support President Trump and to protest what many of us believe to be a dishonest election. The peaceful participants walked in and at some point, somebody acted out, and others reacted — could have been interloper BLM whose modus operandi is violence and rioting, for all we know. Or other liberals there to create trouble. No terrorist intent at all – at least from our good President Trump’s supporters! That’s how Democrats get their way, not Republicans!

Just start Shooting (with as many Nonlethal weapons as it takes)to put this Shit to a stop!!!!!
I personally don’t want to see Anyone injured, but if their so called peaceful protests are Not………then it’s high time to get as BRUTAL AS IT TAKES to put a stop to it 🤬🤬🤬🤬🤬
If the Antifa mob and the BLM mobs don’t get the idea (and remember that these people are SUPPORTED by the DNC leaders)put them down HARDER 😊😊😊😊😊

Warnings went out before the event not to attend, that it had been infiltrated by Left-wing agitators. The same warnings told that .gov had also infiltrated and were using the event for their own agenda. The warnings were correct.

Look members of congress read documents before the House. These declassified documents proved the FBI and department of injustices were part of the riots and helped to incited the illegal mob. They did nothing to prevent the breach. If you want fair those who carried out the two rigged elections, and participated in this riot (secret agents), to include the democrats that failed to approve Trump’s offer of national guard House must be arrested too. The now weaponized cabinet agencies whose sole purpose was once to help us, are now tools of the illegal regime to crush critics. The one party brain washing media which is 98% of all news, studied and copied the tactics of Mao, and Stalin to serve their masters. Without our consent, our illegal dictatorship, forced Khmer Rouge Marxist tactics to be taught in schools to indoctrinate innocent children to worship our illegal Democratic communist party masters, instead of learning to me thankful to be born here. This is not a federal government, but an evil vile cancer to freedom. We must pray God protect us from this illegal government.

All this stupid, ignorant, idiotic, etc.laser-like attention being given to the incident of 6 January for nothing more than the democ-rat party’s political agenda while Portland, Seattle, Minneapolis, Chicago, Baltimore, Los Angeles, Atlanta, etc. etc, just continue to be plundered, burned, and simply ravaged by apparent friends of Pelosi, Schumer and their other socialist anti-America mob members! Priorities anyone? HUH???

You know the real reason no charges have been filed about the Jan 6 event? Because those people who were breaking in and destroying things were there via Pelosi’s request! She secretly requested her ATTACK DOGS, BLM AND ANTIFA, to dress like Trump Supporters and attack that building so she could have another reason to Impeach DJT! That whole disaster was Pelosi’s idea, NO ONE ELSE!

You won’t see anyone prosecuted for that break in because Pelosi orchestrated it and the players were her Attack Dogs BLM and Antifa! The dems will NOT arrest their Attack Dogs because one of those Attack Dogs could possibly identify Pelosi as the one who planned that fiasco.

THINGS ARE NEVER WHAT THEY SEEM WHEN YOU ARE DEALING WITH DEMONRATS! Do the research, do a deep dive, then trace the trail of responsibility and it ALL LEADS BACK TO PELOSI! And the Dem leadership is “run” by Pelosi…nothing is going to happen to those FAKE PROTESTORS BECAUSE THEY ARE LINKED TO PELOSI. End of story.

Biden said anyone attempting to overthrow our gov would need equivalent of F-15’s & nukes: so why are folks that were let into the Capitol on 1/6/21 being held: NO DUE PROCESS!!!

You wrote “Those are all a very far cry from ‘sedition,’ or ‘insurrection.’ Let’s call January 6 what it was, not an ‘insurrection,’ but a violent, criminal riot.” More like a fake set up with fake “rioters” spun by fake news staged for and by a fake president.

Quit calling them Trump supporters. The FBI, the day after, said that Trump was making a speech, 12 minutes before the end of his speech when the capitol riots started. It was a mile walk too. Know who they arrested inside? ….Antifa, BLM, Proud Boys, Oath Keepers, Insurgent USA. Antifa website told members to wear Trump hats. The whole thing was to blame Trump.

If they all can lie about and will be believed by most everyone why should they bring charges when that is all they want anyway?

There was a HUGE false flag contingent in that crowd. Who set them up to it? Whether Pelosi or FBI, even if positively identified, I doubt they will investigated, much less prosecuted. It has always been the case that incipient dictators can always find a cadre of cold, heartless Gestapo, KGB or AVO psychopaths to do their bidding,

Equal protection under the law? – Mark 1:1

[…] Unlike BLM or Antifa in Seattle or Portland or Minneapolis or New York (or many other U.S. cities), those who entered the Capitol did not carry guns or bombs. In fact, although the press may call them “insurrectionists” (possibly just because members of the press tend to parrot Democrats), nobody in the Capitol riot has been charged with insurrection or sedition. […]