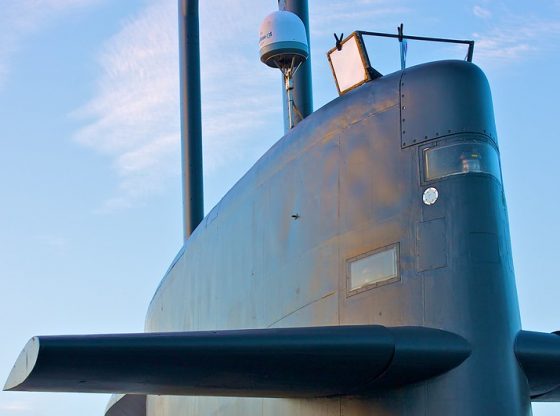 Last month reports began circulating of a strange new Chinese submarine for the People’s Liberation Army Navy (PLAN). Western observers have taken to referring to it as the Type-039C/D. This being the third or fourth major variant of the existing Type-039A Yuan Class sub. The submarine recently left a shipyard in Wuhan and is reportedly currently sitting in the Huangpu River in Shanghai.

It is a non-nuclear attack sub which may use lithium-ion batteries to remain quiet and undetected, and hosts a unique angled sail similar to a Swedish design.

And why we should stop saying it’s a copy of the Swedish A-26 class.

Even managed to get it on Airbus satellite imagery. https://t.co/EN4lbgSqz5

As noted by H I Sutton in Naval News:

By far the most distinctive feature of the new submarine is the sail. This has an angled upper section with an angled chine running along it. The angles created resemble the fuselages of stealth fighter planes and may reduce its radar cross-section when it is on the surface. This would make it more stealthy when entering or leaving port. We can speculate that it may have hydrodynamic advantages, such as reducing the wake while at periscope depth.

The reshaped sail also creates significant volume near its top which may be used to house new systems. However, overall the sail is not larger than the previous Yuan class boats. So unless there is a significant reduction in the size of the masts, it seems unlikely that houses anything substantial.

De plus en plus près… pic.twitter.com/DuvLoFAu6i

Kyle Mikozami writes that a stealthy sail such this:

…would allow the Type 39C/D to leave port and travel the hundreds of miles to its destination surfaced with less of a chance of being detected. This would save fuel and allow the submarine to patrol even farther. The sail is reminiscent of the A-26 design that’s currently under construction in Sweden, but Sutton says it’s too early to judge the new submarine a copy of the Swedish boat.

Because of the angled sail there is a natural comparison with the Swedish A-26 Blekinge Class submarine. Superficially it look similar. And it is possible that the Swedish design, which has been public for many years, was an inspiration. But on closer examination there is only a general resemblance and they are actually quite different.

The thinking behind the A26 submarine, elegantly put together by Forbes. #saabinthesea #submarine https://t.co/ii27cbqxdv

As for the Chinese sub, Mizokami speculates that:

The sub likely also has an air independent propulsion (AIP) system, which can power a submerged submarine for up to 2 weeks at a time. The problem? An AIP-powered sub is fairly slow. The new Chinese submarine may also have banks of lithium-ion batteries for extra-quiet running underwater. Submarines have used batteries for silent running for a century, but using lithium-ion could mean more power for much longer than other battery types. ADN

LISTEN UP….NO MATTER EARTH’S TECHNOLOGY….GOD Can DESTROY it ALL. CAN the CREATIONS Outdo the CREATOR???? I THINK NOT. WHO Can OUTGIVE GOD’S PRICELESS GIFTS….the HOLY B IBLE and the GIFT of SALVATION????? GOD Can TAKE DOWN ANY GIANT. IS ANYTHING IMPOSSIBLE for GOD??? HE Can DO MORE Than 10 THINGS ALL at the SAME TIME.SOMETHING NO HUMAN CAN DO. HIS ABILITIES are BEYOND HUMAN UNDERSTANDING. I am GLAD HE is on MY SIDE. From SamuraiQueen. 😄😄😄

NOW, they believe in Aliens!!!

Congratulations are in order for the Chinese engineers that came up (?) with the idea … those same engineers are now planning the underwater recharging stations … and of course, are busy designing the reel for the 23,500 mile extension cord… 🙂

So… does anyone have a problem with these CCP ‘geniuses’ sending this ‘yellow-submarine’ to watery grave to test the efficacy & reliability, of their lithium-ion, batteries❓☠️💀🤡

Well I recall the lessons of my father, who served in the Armed Forces in an Asian war. He told us that human life there has no meaning and individuals are expendable. So how many Chinese lives were forfeited in the development of this submarine? I shudder to think.