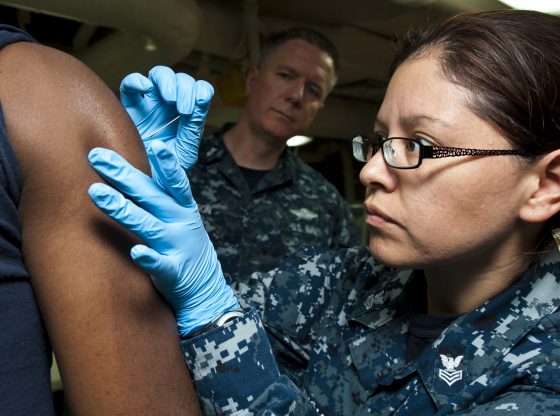 Today’s PDB includes a variety of critical issues such as – In launching airstrikes in Syria and Iraq, Biden lowers bar for use of military force. War is on the rocks. War, or at least interstate war, is on the rocks. US-UK warn of new worldwide Russian cyberespionage. US days from completing formal Afghanistan withdrawal but up to 1,000 troops could remain.

VA may force employees to get COVID vaccines.

How to make sure the Black Sea doesn’t become a geopolitical back hole.

Counterpoint: Is the military teaching critical race theory? Not really. Cotton and his allies have publicly confronted Pentagon leaders in recent weeks, concerned that the Defense Department’s push for diversity and inclusion training and education is a thinly veiled vehicle for indoctrinating troops into the idea that white men are oppressors, people of color are victims and that America is an intractably racist country.

In launching airstrikes in Syria and Iraq, Biden lowers bar for use of military force. President Biden’s decision Sunday to launch airstrikes against Iranian-backed militias in Iraq and Syria demonstrated how the administration plans to handle attacks on American troops and facilities in the region: The U.S. will respond forcefully even if no American personnel are killed or injured, a lower bar for retaliation than was employed by the Trump administration, U.S. officials said.

War is on the rocks. War, or at least interstate war, is on the rocks. Developed countries have managed to avoid major conflicts with one another now for 75 years — perhaps the longest such hiatus in history.

CCP China’s J-35 carrier fighter appears; step to ‘most powerful navy’? China’s Navy has taken another step toward eliminating the last advantages that the US Navy enjoys, in the form of the new, stealthy carrier fighter aircraft known as the J-35.

US-UK warn of new worldwide Russian cyberespionage. The US and UK governments today revealed a cyberespionage campaign conducted by Russia that is targeting “hundreds of organizations” worldwide, with a focus on US and European governments, militaries, and defense contractors. The advisory names the Department of Defense as a known target.

Ukraine, US launch Black Sea drills despite Russian protest. Ukraine and the United States have launched a military exercise involving more than 30 countries in the Black Sea and southern Ukraine, despite Russian calls to cancel the drills.

How to make sure the Black Sea doesn’t become a geopolitical back hole. The current battle for influence and supremacy in the Black Sea region is the most intense in modern memory.

US days from completing formal Afghanistan withdrawal but up to 1,000 troops could remain. The US could complete its troop withdrawal from Afghanistan within days, according to multiple US officials, making this a critical week in President Joe Biden’s campaign to end America’s longest war even as US military officials warn the country could devolve into civil war.

Afghan War causes record bloodshed amid US troop exit. The simmering war in Afghanistan, if official accounts are to be accepted, has killed more people last month than in any other month since 2001, when the United States and NATO troops invaded the country.

VA may force employees to get COVID vaccines. Veterans Affairs employees could be required to get the coronavirus vaccine to keep their jobs, under a plan being considered by department leadership.

US Navy ditches futuristic railgun, eyes hypersonic missiles. The U.S. Navy has pulled the plug, for now, on a futuristic weapon that fires projectiles at up to seven times the speed of sound using electricity.

THURSDAY PDB – Russia Tests US and UK in Black Sea, US Navy Has ‘Duty’ to Defend Taiwan, Trump says ‘Fire’ Gen. Milley for Being Woke, Navy’s ‘Strategic Bankruptcy,’ Swiss F-35s
Yes, ‘Anti-racist’ Left Wants to Erase the Fourth of July – And the Rest of American History and Society