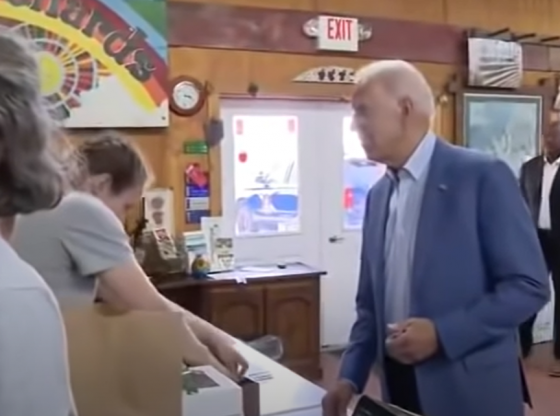 This Independence Day weekend President Joe Biden was caught on camera in an uncomfortable exchange with a reporter. The embarrassing incident occurred on Saturday as the President tried to speak with reporters about the recent cyber hacks and Russia while also checking out with the cashier at a local store in Central Lake, Michigan.

Biden couldn’t seem to answer the question without fumbling for note cards from his jacket pocket.

The Daily Mail reported: ‘With the most recent hack by the Russians, would you say that this means –’ a reporter began asking, as Joe Biden awkwardly fumbled with notes in his suit jacket pocket to answer a question on something he was briefed on just moments before. The 78-year-old Mr. Biden, however, cut off the reporter, saying U.S. intelligence is not sure if the hack came from the Kremlin.

‘We’re not sure it’s the Russians,’ he said. ‘I got a brief when I was on the plane. That’s why I was late getting off the plane.’ ‘I’ll be in better shape to talk to you about it –’ Biden started, then cut himself off.

He then proceeded to awkwardly fumble with the notes in his pocket as he attempted to answer the reporter’s question while checking out with the cashier, who asked him to no answer, ‘Would you like a receipt?’

‘I’ll tell you what they sent me,’ Biden said, while looking at the paper he pulled from his pocket, not answering the cashier’s question.

‘The idea – first of all we’re not sure who it is for certain, number one. And what I did, I directed the full resources of the government to assist in a response if we determine – what else you need?’ Biden said, redirecting his attention to the cashier.

‘I directed the intelligence community to give me a deep dive on what’s happened. I’ll know better tomorrow,’ he said in continuing his response before putting the paper back in his pocket.

Trump took the Montreal Cognitive Assessment (MoCA) to test for memory impairment, dementia, and other possible infirmities, administered by Jackson in 2018. Trump passed with high marks. Biden’s cognitive state has been questioned in light of a series of verbal gaffes throughout his campaign and presidency, which are only appearing to get worse.

‘I think he’s demonstrating every single day that there is something going on,’ Jackson told Fox News on Saturday.

Jackson added: ‘You can go back – there are forty years of tape of this man [Biden] – he’s always made gaffes and stuff but these are different, he’s confused, he’s disoriented,’ the congressman said. ADN

Well, Hiliary is seething … she was to be the first … but looks more like Kameltoe will be the first, by “default” (the “fault” of “sippycup” Joe…but then that might be why she was Named) … IMHO the country, as we knew it, is lost…. I am 81 (in a couple months) & just pity the kids that will never know how great the USA was …

That saddens me, too, nemo. And I’m also sad for those of us who do know how great this country has always been, how in the past there has been civility and cooperation and mature compromise within our Congress, in the best interest of the people. And to see now, how far we have fallen. Our good President Trump had us on a good track to keeping us great. And I miss him and his obvious love for America and the people! I pray that God will show us the way out before it’s too late. 🙁

This is on the latchkey kid/parents who raised themselves because mommy and daddy were at jobs so they could buy all those adult toys! Believe me, this is true! I used to teach many of those latch key kids and most were left with a computer or TV to entertain them — and no Parentsl Controls to keep young minds out of trashy stuff!
I used to warn parents and blog about the games young children were playing on the computers, games where people would explode into tiny pieces and blood and gore was all over the screen. No one paid attention and now we have a bunch of demanding illiterate kids that are politically driven by liberal public school teachers and who feel no emotions when people are hurt of killed. Our kids are not smart but very selfish and demanding and expect everything while doing nothing to earn it.

This is a great sadness for our children because their future is 100% politically charged unless we can rid the public schools of political liberal teachers!

That would be the beginning of fixing our Nation…fix our kids! They are our Future!

Just think, CHEATER Joe Biden is in now “in charge of the launch codes to launch our nuclear weapons with his mind gone due to dementia and old age senility”!! Last week, he “threatened to NUKE American gun owners”!!!! How safe do you feel tonight all the free American people????? He has to go and be replaced, period!!!!!!!!!!!

As they say, he’s got his finger on the button.

Forget the cognitive testing do a simple drug test and you’ll see he is a coke fiend and an unfit human being for any type of job!!!

Pres. Trump took the test and I think even Pres. Obama did. Come on Joe, your a better man than Pres. Trump, take the test. Come on man.

Are you kidding? Joe Biden can’t even pass a kindergarten test. Trump was a better president all around and got things done. He didn’t need Cards and his pocket to look at when he was asked questions. You must be hiding under a rock to not know this.

Beijing Briben’s mind becomes more addled and foggy each day! Doesn’t look like he’ll even make it a full year before they’ll have to check him into memory care at the closest nursing home. Unfortunately once we’re out with Joe they’ll bring in the hoe!

We have someone with dementia making Executive Orders that affect us all…and the next two in line are incompetent crooked bimbos . Lord help us all!

He doesn’t need a test, he needs a nappie.
The thief can’t remember.

Whoa. Putin must be shaking in his shoes!! Everyone knew that Biden was ill and yet the Democrats, including his wife Jill, allowed him to be a puppet and scapegoat to push their socialist agenda at his expense They can blame him for anything that goes wrong and walk away unscathed. Pathetic!!

This is Clearly Elderly Abuse ! Joe Biden has Dementia ! Just Let VP Harris take Over so she can Finish Destroying America and appoint the Mayor of Chicago LightFoot as VP ASAP ! 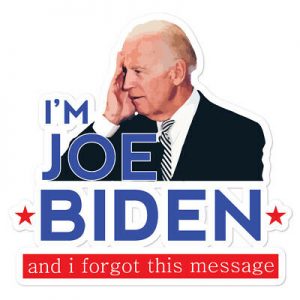 If this were a relative of mine, I’d have him into a psychometrician and a neurologist for testing as soon as possible. He may not be senile but his behaviors and speech sure don’t give one much comfort. I can take you to any number of “Assisted Living” facilities and show you people Biden’s age who are clearly senile but who function as well as (if not better than) he. His incapacity is frighteningly obvious – as are the Media’s efforts to avoid that issue and to provide “cover” for his fumbling and confusion. Pathetic.

Biden has lost a great deal of his cognitive ability! Come on now people! The man carries around note cards to tell him what to say to reporters? OMG! THIS IS WHO IS RUNNING OUR NATION!????

Biden will FAIL horribly any cognitive test and that is why people are protecting that old worthless fart. They need to back away and let him FAIL so we can get someone in there that CARES ABOUT AMERICANS AND DOESN’T HAVE TO USE NOTE CARDS TO EXPRESS HIMSELF! He is the perfect DUMMY — someone is pulling his Puppet strings to destroy our Nation! We NEED TO FIND THAT PERSON AND ARREST HIM/HER!

SORRY, Harris would also FAIL that cognitive test — but if you tested her on clothing, make up and hair color she would pass with flying colors! Anything else is an unknown to her, especially thousands of children and illegals at our Southern Borders!

BIDEN/HARRIS are both failures in Leadership and Joe is in the back pockets of Russia and China.. He is doing some very nice things for both countries some of which have devastated the USA and others to enrich geometrically our enemies.. Joe is a grave danger to the USA and possibly he will allow our enemies to enslave the USA to a foreign dictator.

[…] made patently false statements, and generally appeared bewildered and lost. Earlier we reported how Biden had fumbled with notes unable to coherently answer a simple question about Russian […]