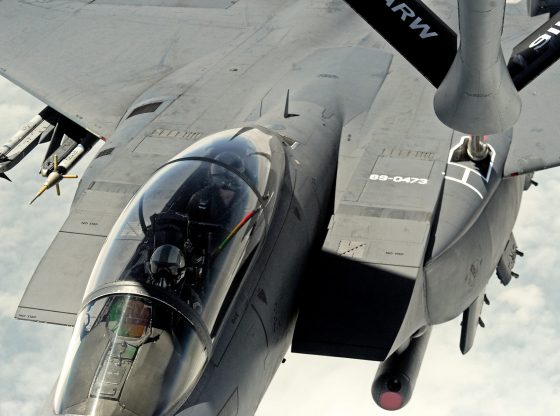 An F-15E Strike Eagle aircraft piloted by Col. Jeannie Leavitt receives fuel from a KC-135R Stratotanker during her final flight, May 29, 2014, over North Carolina. During her career as the first female fighter pilot, Leavitt recorded more than 2,600 flying hours in the F-15E. Leavitt is the 4th Fighter Wing commander. (U.S. Air Force photo by Senior Airman John Nieves Camacho/Released)

Today’s PDB includes a variety of critical issues such as – The Royal Navy will add 50 percent more surface-to-air missiles to its existing destroyers. Deployment of US troops along US-Mexico border will stretch into a fourth year. US military says withdrawal from Afghanistan 90% complete.

On fleet size, Congress should listen to the Navy’s leaders, not its planning documents.

The Air Force didn’t have a manual for pregnant airmen. So this mom made one.

Mark Milley’s last battle? After his recent performance on the Hill, you don’t want be in a foxhole with this guy.

The Air Force didn’t have a manual for pregnant airmen. So this mom made one. The Air Force wants to turn Thompson’s guide into an official document.

Military weighing mandatory COVID-19 vaccine after full FDA approval. “We’re [a] planning organization,” said the Pentagon spokesperson. “I don’t think that should surprise anybody that we’re trying to think about what the implications would be and how…we’d react to [full FDA approval].”

The Royal Navy will add 50 percent more surface-to-air missiles to its existing destroyers. Once the new Sea Ceptor weapons are fitted, the six Type 45s, which provide area defense for the U.K.’s Carrier Strike Group, among other duties, will increase their air defense missile payloads by 50 percent.

The Party Line – Domestic terrorism today more complex than threat after 9/11, says DHS counterterrorism chief. The United States has never faced a terrorism challenge as tough as the homegrown one it’s up against now — not even after 9/11, the nation’s top counterterrorism official told a virtual conference this week at the University of Nebraska at Omaha.

Deployment of US troops along US-Mexico border will stretch into a fourth year, Pentagon announces. As many as 3,000 troops will be deployed along the U.S. border with Mexico until Sept. 30, 2022, stretching the military’s mission there into a fourth year, the chief Pentagon spokesman said Tuesday.

After troops exit, safety of US Embassy in Kabul top concern. Security assessments at the embassy are frequent these days.

There’s a wrong way to withdraw from war. We’re on the verge in Afghanistan. Presidents, Cabinet secretaries, generals, special envoys, congressional delegations and other assorted VIPs know the Bagram air base near Kabul, the capital of Afghanistan.

It’s too easy to troll like a Russian. We’re scholars, but amateurs, and we found it alarming how quickly we imagined a personalized misinformation campaign with actual publicly available data.

On fleet size, Congress should listen to the Navy’s leaders, not its planning documents. “If we’re going to pace the adversary, we need to have a bigger Navy,” Navy Vice Adm. James Kilby told senators.

Raytheon wins $2B contract for new nuclear cruise missile. Raytheon Technologies will get up to $2 billion to develop the U.S. Air Force’s Long Range Standoff Weapon system, a new nuclear-capable, air-launched cruise missile that will be carried by B-52 and B-21 bombers.

Iran Enriches Uranium while sleepy Joe Biden, “the Feather Merchant in Chief,” pretends to be a virologist!