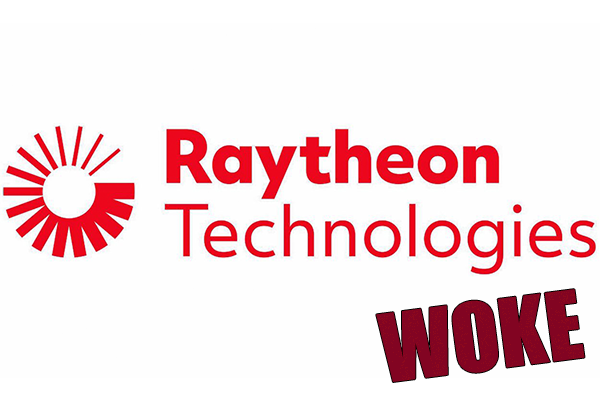 PENTAGON WATCH – It isn’t only the Pentagon that is ‘Going Woke,’ America’s major defense firms are also pushing outrageously neo-Marxist and neo-racist indoctrination on their hapless employees – all under the guise of “diversity training.” Raytheon, one of America’s largest defense contractors, reportedly has adopted Critical Race Theory (CRT) and implemented ‘Intersectionality’ training for its senior executives.

The company that just won a $2 billion contract from the U.S. Air Force to build a nuclear-capable cruise missile, created a program in 2020, called “Stronger Together,” which encourages employees to “becom[e] an anti-racist today.”

Unfortunately, as expected, this “anti-racism” program blames white for everything. It encourages white employees to self-flagellate and “identify their privilege” and “step aside” in favor of minority employees, according to documents obtained by City Journal’s Christopher Rufo.

National Review notes that: “One workshop aims to teach employees about the concept of ‘intersectionality,’ which is the neo-Marxist theory about “interlocking systems of oppression” and “break[ing] down power into privilege and marginalization.” NR adds:

Other suggestions for employees include “what not to say to your black colleagues right now,” which include statements like, “I can’t wait for things to calm down and get back to normal.”

I’ve obtained internal documents that will shock you.🧵

According to Rufo, the online Zoom program for 13 Lockheed senior executives, called the “White Men’s Caucus” was led by the “diversity-consulting” firm White Men as Full Diversity Partners. This firm says it specializes in “helping” white males “awaken together.” This embarrassing program of directed self-hate and flagellation included a former three-star general and the vice president of production for the $1.7 trillion F-35 fighter jet program.

The participants were asked to internalize “white privilege statements” including, “I can commit acts of terrorism, violence or crime and not have it attributed to my race.”

The diversity trainers posed the question, “What’s in it for white men?” A list of responses included, “I won’t get replaced by someone who is a better full diversity partner,” “[I will] improve the brand, image, reputation of white men,” and “I [will] have less nagging sense of guilt that I am the problem.”

The consulting firm claims that the “roots of white male culture” include traits such as “rugged individualism,” “a can-do attitude,” “hard work,” “operating from principles,” and “striving towards success”—which are “devastating” to women and minorities.

More of the racist indoctrination can be seen below:

The program was led by the consulting firm White Men As Full Diversity Partners, which specializes in helping white males “awaken together.” The participants included a former three-star general and the vice president of production for the $1.7 trillion F-35 fighter jet program. pic.twitter.com/x5YU2bBNbn

“This is pure neo-racism from a company that receives billions of taxpayer dollars every year,” Rufo said in another tweet. “I call on the United States Senate to launch an immediate inquiry into the racist practices at @LockheedMartin. We must shut this down before it endangers our national security.”

Next, participants were asked to repeat and internalize 50 “white privilege statements,” including: “My culture teaches me to minimize the perspectives and powers of people of other races”; “I can commit acts of terrorism, violence or crime and not have it attributed to my race.” pic.twitter.com/uA8tZXajFi

What an example of verbal horse pucky. I feel very badly for every white man and their families who died in or of the very UNcivil war that eradicated slavery.

Having been born and grown up in Africa, for ten years taken a risky stand against apartheid in South Africa, my disgust for what I now see going on in the West is immense. Any white person who falls for the crap that goes with Critical Race Theory, a Marxist concept to create social division, is a half-wit. The same goes for those who don’t recognize that BLM is an anti-white black racist and Marxist organization. And any corporate executive who falls for and promotes this garbage deserves a thundering knuckle sandwich.
Meanwhile, from a foreigner’s perspective, collectively black Americans are the world’s champion racists – and too clueless and ignorant to recognize their disgusting and stupid racism. If more would bother to complete high school they might have a better idea of how the world works.

Surely there are other defense contractors we can use.

Evil white people and their desire to improve themselves, their families and their community
what a horrible concept…self improvement and pushing through difficulties
horrible concepts, almost sounds like American work ethic.

Right. Or play hooky from school, steal hubcaps and shoot up the ‘hood! It’s nothing to do with skin color, it is conformity to a false, demented culture.

Black Pastor James Manning in Harlem would agree with you. He once told his congregation that as “white folk” moved into Harlem, the place cleaned up and crime decreased

When woke social issues become more important than professional competence, the competent will leave and the composite competence of the company will take a nosedive. If you’re in the military, do you want to bet your life on equipment made by critical race theory morons – or someone of the highest competent? You decide.

You already know the path the “woke” ignoramuses that are now “in control” WILL take…Bye, bye American Pie….

Systemic Ignorance has morphed into Systemic Stupidity…and is establishing a firm hold on the 50% brainwashed that inhabit what they desire to be the new country of “MoronAmerica”…..

Yeah, I can just imagine Kelly Johnson, Ben Rich, Sherm Mullen,etc attending such nonsense. I worked at Lockheed for some 30 years, though we id have to go thru “Harassment’ training…………..

The liberal dem bloodsucking parasitical ticks still don’t see the 2nd Civil War coming do they? They really do think all tey have to do keep on talking, don’t they?
60 years now we have cordially despised them, That began to evolve in 2009, today we hate them with a depth, intensity andbitternerss that has no bottom.
They can belive, when it starts, it will be merciless.

I just wish our politicians would go all out and do something about this. If the evils can put this false stuff out they should everyday show the truth 24/7 on video. What really happened. But they just don’t have the courage or they agree. Who knows

=They are pushing the limit! there will be a civil war between law abiding Americans of all races and the race baiters and the morons that protest hatred of America,which I believe is about 3% of the people, so we know who will win so you morons best start using your brain if you even have one.

Good grief! Our xountry is going down the drain so fast under Biden. WE need Trump back before our country is completely gone.

Where is thE sanity in our administration? Do we not have any Conservative heads left in our military leadership? This path that are taking will only destroy us as a power at all in the world. Sick we are and sick we will be destroyed. Pray for Jesus to return soon to end it all and make things right.

Beyond disgusting for all v=companies involved. Its also too bad the white men didnt tell them to shove it and quit their jobs in protest. This is nothing but reverse racism. Only an idiot will go along with this garbage.

This was just about the most outrageous crap I’ve read in ages! And, believe me, my in-basket is absolutely BULGING with crap like this! I’m willing to bet that the Chi Coms don’t waste their time on crap like this!! Can you just hear Mr. Chi-Com Bigshot conducting a class in how to be LESS YELLOW?!? And ANYTHING about “yellow privilege?!?” No, I can’t either!!

Everyone quit and see what this bullsh*t CRT has to say about it. Or file a civil suit and take these morons to the bank.

The only reason why these ppl are not working for the chi-com CCP & the Russians, right now, is it doesn’t pay that well…

Who in the hell are the ones directing this brain washing ??? Why are our eyes not open to this communist plan to destroy our democracy and why are we letting these turncoats get away with all this crap against our Constitution??? Are all these sleepers been in all our institutions/ education/ and our government all these years ?? We patriots better step up soon and stop this before we do loose our freedoms and country !!!!!

How is it even possible for such a company as Raytheon and others such companies to ever consider such an Evil New Socialistic Government Doctrine as Critical Race Theory Being Viable !!! This is America, where All Men & Women Are Supposed To Be Equal !! This was settled By Our Constitution and the Civil War !!! I have no idea where these Big Companies are headed by submitting to all the growing Socialistic and Evil Ideologies?!?!?! Conservatism, Consumerism and Free Enterprise Brought All of Them To Where They Are, Why Convert To This Socialistic Ideology and Mind Set ?!?!?! Maybe, it is just to take sides with the Socialistic Powers, Rather Then Fight Back Against This Evil Socialistic Government Within America !!!!!!

Maybe these minorities and women they refer to should adopt the white guy philosophy of hard work, self betterment and I for one am NOT about to apologize to any of these so called oppressed people for being white.They have every oppty to excel just like we do.I’m tired of all this Bull Dooky be peddled by big corps and the MSM.

Complete joke and proof of fraud waste and abuse by our hapless lackies in our government!!