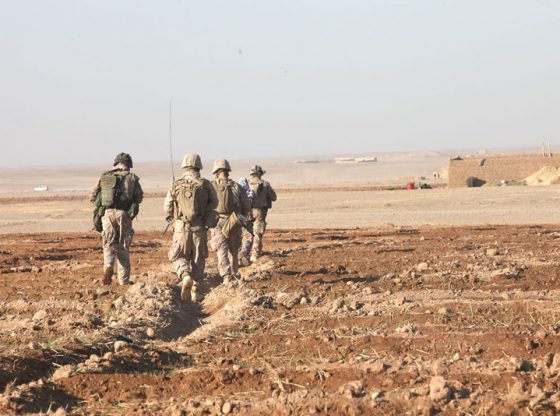 Marines and the Danish mentor team with Afghan National Army soldiers of the Shorabak Garrison Security unit, patrol to the village of Habibabad, Dec. 13

ANALYSIS – As has been noted even in establishment venues, including The Washington Post and others, President Biden’s disastrous withdrawal in Afghanistan was probably the worst possible way to disengage the few remaining U.S. troops and American presence in that critical country. The covert, late-night evacuation from Bagram Air Base was beyond humiliating, and insulting – it was reprehensible.

And the emboldened Taliban and demoralized free Afghans are reacting accordingly. The Taliban is surging, and many free Afghans are reeling or fleeing. Without U.S. air support or contractors, the collapse of America’s 20-year-old ally may only be months away.

The U.S. wasn’t kicked out of Afghanistan – Biden simply surrendered in the most cowardly fashion imaginable. And yes, if President Trump had done the same thing, as he had stated he wanted to, I would be saying the exact same thing.

Earlier I wrote how CCP China might take advantage of this sudden and vast new power vacuum created by Biden in Central Asia using various means such as the United Nations or Shanghai Cooperation Organization (SCO). But also, by using the Belt and Road Initiative (BRI) to gain control of the country economically.

In similar vein, Mark Almond, director of the Crisis Research Institute at Oxford University, provides some excellent insights in his piece for the Daily Mail titled, “Days after we leave Afghanistan, China is moving in to gain a direct route to the riches of the Middle East. And with billions in their war chest, where will their ambitions end?” He notes:

In a development that should strike fear through Western capitals, Beijing scents [senses] an unrivalled opportunity to extend its influence in the region and gain strategic territorial and economic advantage that could rewrite the geopolitical map in its favour.

Indeed, for President Xi Jinping’s Marxist government, Afghanistan is a prize beyond measure. It offers a portal through which Chinese military could access the Arabian Sea, via Iran or Pakistan.

And the war-torn country could provide two other things China desperately wants: overland access to Iran and the Middle East, and a route to the Indian Ocean and on to Africa.

Almond adds: “Beijing is confident that it can succeed where Whitehall, the Kremlin and the White House have failed over the centuries, for the simple reason that it is not interested in transforming Afghan society. It has learned from the mistakes of the Russian communists. Chinese communists have no desire to remake Afghanistan (or anywhere else) in their own image.” He continues:

Nor will its goals be achieved by brute force; President Xi has a far smarter plan.  When the Kremlin occupied Afghanistan in 1979, it saw it as a stepping stone to dominating the oil-rich Middle East, but Soviet communism had little to offer compared with the wealth of modern China.

Xi prefers to use financial muscle as much as the threat of military power and, if reports that Beijing is prepared to invest $62 billion in Afghanistan are true, it is following a blueprint perfected in many countries from Malaysia to Montenegro.

Under a policy known as the Belt and Road Initiative (BRI), vast loans are offered to cash-strapped countries for infrastructure projects. In return, China gains access to new trade routes and ports, as well as banking hefty interest payments on its investment.

… In return for its largesse, China will also expect the Taliban to ignore the ‘genocidal’ oppression of their fellow Muslims, the 12 million Uighurs in China’s Xinjiang province, which sits close to the Afghan and Pakistani borders.

…China sees Afghanistan — even with the Taliban back — as one of the most crucial squares on the chessboard of world politics. And like a chess grandmaster, President Xi Jinping isn’t planning for a quick checkmate.

Almond concludes what I also fear – “that historians will look back at what is happening now and see that China did indeed learn the lessons of history. Where Britain, Russia and America have failed, it may yet triumph, gaining the influence it seeks without paying the same terrible price in blood.”

If I didn’t know our president is a natural born imbecile, I’d suspect he’s a Chinese operative.

He has been on the Chinese CP payroll since he found he could sell Quid pro quo to them. The CCP has been supporting the Biden Clan of Grifters and none of them have ever held a real job unless it was a political loan or other bone thrown to them or blatantly in your face QUID PRO QUO. They have all become wealthy since Joe entered politics 50 years ago. It has been GOVERNMENT GOODIES THAT MADE THEM ALL WEALTHY.

Biden just gave Afghanistan to the Chinese…China could care less about the Taliban, they would just ruthlessly destroy them, and anyone else that go in their way…nice big, very fine air base the tax payers of America just donated to the Chinese……but then what did anybody expect, it was part of the plan, the Chinese own Joe and Hunter Biden…but at least, if we can stop Biden from throwing more “aid” down that rat hole, the end of American taxpayers wasting money there might be in sight.

The last time the Chinese (well, actually, the Mongols, albeit with a fair number of northern and western Chinese among them) entered Afghanistan, on their way to better places to conquer, they left so quickly that they did not even take their sick and wounded with them, the descendants of whom became the Hezara Clan. And that’s been the pattern with everyone who’s ever invaded the place, from Alexander, to Genghiz Khan, to the British under both “John Company” and the Raj. The place is an ungovernable mess and if the Chinese decide to come in to fill the vacuum we left, well, they can just add the inevitable problems to their problems with the Uighurs. Such an occupation risks exacerbating China’s problems with India, potentially creates problems with Russia and Pakistan, and may well sour their budding relationship with Iran. Now, I may think Biden (aka “Mr. Mumbles, the ventriloquist’s dummy”) is an idiot and nobody can say that the manner of our departure has been well handled but it is not certain that leaving is, ultimately, a bad thing, even if the Chinese elect to fill the vacuum we’ve left.

Another day for sleepy Joe to be the most ignorant pos on the planet. Obama picked the corrupt moron white guy to be his white gopher, because he could never upstage him. Biden is a crude sick pervert. The Chinese own His puck son and they own Biden. Biden is not running America China is. The Chinese own the corrupt DNC. this nation is finished our grandchildren will live under the communist Democrats who are slaves to the Chinese.

I kinda get the sense, “Purple”, that you don’t like the man…

It seems that after 20 years the afghans themselves were NOT ready to kick the rears of the Taliban; So WHY should we keep wasting money there. I bet the Chinese will have no better luck and the Russians got their butts kicked there years agao, are THEY stupid enough to try again?
Biden is a moron and did NOT do the shut down in the right manner.

I think you and I said pretty much the same thing, Pam (if I may call you Pam). See my comments, supra.

Nothing but sincere thanks to all you Communist Democrats.When the shtf please— do not let me find out you’re a Democrat as things probably won’t go well for one of us.And no,this is not a threat—it’s a promise.

Biden’s a d-mn fool! #bushwasright about appeasement. It doesn’t work. I remember what he said before leaving Iraq & boy was he prophetic!

Never in the history of Central Asia has this Afghan issue been worse handled. In the wake of 9/11, in one of the most amazing operations ever mounted, 2 dozen American Spec. Forces (Green Beret) operatives, in two teams, and with air and logistic support from air and operational bases in neighboring countries, overthrew the Taliban in a campaign of only a few months. Absolutely brilliant. And then the government (initially under Bush II, but continued under his successors) screwed it up beyond belief. Almost NOTHING the politicians did was helpful. Wrong choices and bad decisions were the order of the day (and then, of course, we decided to shift emphasis to the needless war in Iraq, depriving Afghanistan of the forces, resources, and attention it needed to consolidate the victory). It was abject defeat snatched from the mouth of stunning victory. One example will suffice (tho’ hundreds exist). Most Afghan peasants made money growing opium. The USA sprayed and burned those fields, impoverishing the peasantry & turning them against us, creating an instant insurgency. AND we did that just as the world was experiencing a shortage of opiate type drugs! We could have avoided the shortage, won over the peasants, and stabilized the country by just buying their opium instead of treating the “War on Terror” as part of the “War on Drugs”. It was breathtakingly stupid. Maybe this withdrawal is just a belated acknowledgement of the failure.