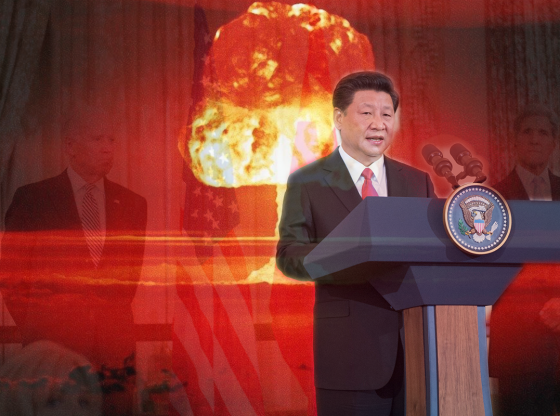 In March I reported that CCP China appears to be building hardened silos for its growing nuclear ballistic missile force. Satellite imagery showed new construction of 11 underground silos at a missile training area in north-central China. And this follows the construction of five other silos begun earlier at the same vast missile training range near Jilantai.

Hans Kristensen, an expert on U.S., Russian and Chinese nuclear forces with the Federation of American Scientists assessed at the time that the 16 silos for China’s newer DF-41 ballistic missiles would be in addition to the 18-20 that China now operates with an older intercontinental ballistic missile, the DF-5. China first showed off the DF-41 on mobile launchers in 2019, but official deployment has not yet been confirmed.

In December 2020, I reported that China may have far more nuclear warheads (350) than the latest unclassified Pentagon report states (200). That is a huge discrepancy. It now appears that the dramatic Chinese effort to double their nuclear arsenal by 2030, I reported here, is growing even faster.

Now we are seeing reports that China is building a sprawling new network of upwards of 120 new silos for nuclear armed Intercontinental Ballistic Missiles (ICBMs) in its western desert that analysts say could change the equation for US military planners.

The discovery indicates that Beijing is bolstering its nuclear capability, and is likely to fuel debate over modernizing America’s nuclear arsenal.https://t.co/BRngCApcrp

The researchers compared satellite photos taken during the past four months with images captured within the past week, finding the missile site covering a grid of hundreds of square kilometers in China’s Gansu province, said researcher Jeffrey Lewis, a Chinese nuclear weapons expert who examined the images with colleague Decker Eveleth, the first person to spot the silos.

The pair’s findings were first reported in the Washington Post.

Lewis told CNN on Friday that most of the silo construction, which has yet to be completed, has likely occurred in the past six months.

“It’s really a startling pace of construction,” he said, adding that the scope of the buildup was also surprising.

“It’s a lot of silos,” Lewis said. “It’s much larger than anything we expected to see.”

The silos, placed in a grid pattern, at 3-kilometer (1.9-mile) intervals, would likely house DF-41s, also known as the CSS-X-20. The DF-41 is estimated to have a range of 12,000 to 15,000 kilometers (7,400 to 9,300 miles) armed with up to 10 independently targeted nuclear warheads (MIRVs), according to the Missile Threat Project at the Center for Strategic and International Studies.

Another tweet shows the suspected layout of the full number of silos. Many could be dummy silos for a shell-game deception, perhaps similar to the original plans for the US MX-Missile in the 1980s.

The DF-41 “is projected to be able to strike the continental United States within 30 minutes,” the project’s website says.

Henry Boyd, a research fellow at the International Institute for Strategic Studies (IISS) in London, said according to CNN:

The relative merits of mobile versus silo-based ICBMs after the end of the Cold War have been frequently debated; simplistically mobile systems are easier to hide and disperse, but more vulnerable if found, while silos are increasingly difficult to conceal, but harder to disable or destroy.

If the PLA (China’s People Liberation Army) has decided to invest in a large number of new silos for its ICBM force, this might suggest a shift in Beijing’s thinking on the matter.

And this likely shift in China’s strategic thinking might require some radical rethinking on the part of U.S. nuclear defense planners. ADN

LISTEN UP….PREZ BIDEN Expects AMERICANS to Use STICKS and STO NES to DEFEND THEMSELVES. HE Does NOT See the WHOLE PICTURE. CHINA Has VULNERABILITIES….in DUE TIME it SHALL Be REVEALED. From SamuraiQueen. 😄😄😄

Yeah, let’s have a nuclear war so the planet becomes inhabitable. As if they’ll be any winners.

When the call comes confirming launch, does anybody really believe Biden is capable of responding

BIDEN does not have control over the nuclear football.. Right there the Demomarxists are admitting that the President IN NAME ONLY JO/BAMA is an empty suit yet he is yammering for the USA to reduce our nuclear arsenal.. When will the Demomarxists insist that JO/BAMA have a cognitive test just as they all but forced the test for President Trump who complied and aced the test at 100% correct as we all knew he could. It appears to me that JO/BAMA wanting the reduction in Nukes in the USA wants China CCP to destroy the USA. How much are those Commucists paying JO/Bama and his Clan of Grifters? He is the BIG GUY on the payroll of the CCP..