Trump and COVID Brought Cuba’s Dictatorship to Its Knees, Will Biden Save the Regime?

Home /Analysis/Trump and COVID Brought Cuba’s Dictatorship to Its Knees, Will Biden Save the Regime?

Trump and COVID Brought Cuba’s Dictatorship to Its Knees, Will Biden Save the Regime? 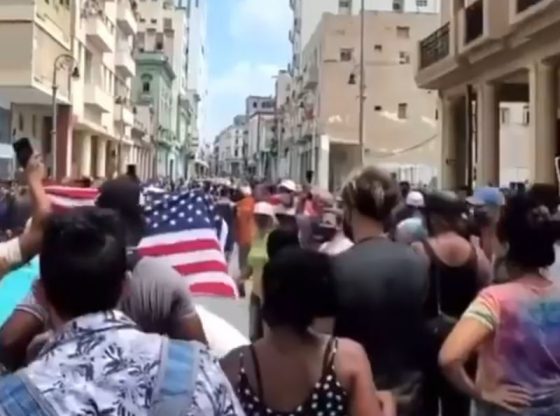 ANALYSIS – While the establishment media, leftwing activists, and the Biden administration desperately try to spin the current angry protests in socialist Cuba as being about COVID vaccines, food, or other necessities, the one word we are hearing from the Cubans is LIBERTAD!  Freedom!

You don’t hear them saying “Bloqueo” or blockade, the regime’s misnomer for the U.S. trade embargo and sanctions.

Pay attention and you will see many of the Cuban protesters making the L sign with their fingers while chanting “we are no longer afraid!” Many are even waving American flags. These aren’t anti-U.S. protests; they are the worst anti-regime protests in almost three decades.

And we can thank President Trump’s strong sanctions and measures against the regime, and still in place six months into Biden’s term for building the pressure on the dictatorship. To that, add the COVID pandemic.

But, not necessarily because of then hardships the virus has caused the people, and the regime corruption and incompetence it has exposed, but because of the stop to family visits from the U.S., and the hundreds of millions of dollars in remittances that still flowed to the island and the regime prior to the COVID lockdown.

COVID isn’t the reason for this breaking point – it’s the added effect of losing even more money after Trump’s strong sanctions on the regime.

Meanwhile, embarrassingly, the Biden administration is absolutely stuck in how to respond. It has kept the tough Trump policies in effect, as it supposedly reviewed next steps. And Team Biden’s initial response showed their warped thinking on Cuba.

At one point, after ignoring the protests all day Sunday, and hoping they would just go away, the acting Assistant Secretary of State for Western Hemisphere Affairs, Julie Chung absurdly said in a tweet at 5:24pm:

So, to the Biden State Department, the protests are about COVID vaccines — and ‘self-help’?

Julie Chung – seriously? That is insulting to those brave Cubans challenging a 60-year-old brutal dictatorship.

Under pressure from Congress and the media, President Biden later on Monday, a full day after the protests raged throughout Cuba, grudgingly made two much better statements in support of the protestors, first saying:

We stand with the Cuban people and their clarion call for freedom and relief from the tragic grip of the pandemic and from the decades of repression and economic suffering to which they have been subjected by Cuba’s authoritarian regime.

Again, trying to inject COVID in there as a major factor for the uprising. Biden later added:

The Cuban people are demanding their freedom from an authoritarian regime. We call on the government of Cuba to refrain from violence in their attempt to silence the voices of the people of Cuba.

But what will come next? As Politico wrote:

…while Biden voiced support for the protesters, describing the protests as a “clarion call for freedom,” much of his policy toward Cuba remains a mystery.

Will Biden encourage more demonstrations? Does his team support adding new sanctions or keeping in place Trump-era sanctions? Is the idea of bolstering diplomatic and trade ties now out of the question? The White House’s painstaking review of Cuba policy now risks being overtaken by current events.

The questions on Cuba policy come as Biden has left largely intact Trump’s high-pressure, sanctions-heavy campaign against Cuba’s regime, despite campaign promises to the contrary.

This is critical now, as many believed Biden intended to return to the Obama-era, soft-on-the Cuban regime engagement policies. But these mass protests may have put Biden in a box now. Even those on the Left who have long supported policies of appeasement and ‘engagement,’ notes Politico:

worry that the protests will only make it less likely that the Biden administration rolls back Trump-era restrictions. They say Biden’s ability to maneuver on Cuba policy will only get more restricted as the 2022 midterm elections get closer.

“They’re just not going to make themselves politically vulnerable by lifting the sanctions, rolling back the Trump policies, when the Republicans will immediately hammer away at it and say it is a gift to the Cuban regime,” said Michael Shifter, president of the Inter-American Dialogue.

Let’s hope this soft-on-Cuban communism expert’s worries are valid. This is no time for Biden to open up to Communist Cuba or loosen Trump’s policies. In fact, it is time to add to them and make things tougher on the brutal regime. ADN

I am going to go out on a limb and say Bejing Biden will save the regime, make sure all those that protested get put in prison (has denied them immigration status) and happily move on to the next destructive thing he can do to this country.

LISTEN UP….GOD Wants PREZ TRUMP to Get HIS JOB BACK. HE Also Wants DEREK CHAUVIN to Get a NEW TRIAL. HE Wants OTHER COUNTRIES to JOIN FORCES with the U.S. Against CHINA. He Wants the TERRORISTS LOCKED UP and SOME are to Be PUT to DEATH. GOD is the RULER of MEN. HE Has the LAST WORD. VENGEANCE is MINE Says the LORD. From SamuraiQueen. 😄😄😄

Yup, O’Biden will save the Regime and lift the Trump sanctions … & my money will be on the imprisonment of the protestors … unless they are shot on sight while protesting as what was done in Tienement Square, in China, a bunch of years back … America is on the brink of destruction from within … (Pity the youngsters who have been brainwashed to the poindt they do not understand what is going on… this is not the country i grew up in…)

[…] rallies follow weeks of unrest in Cuba against the communist government. And one significant aspect of these protests is the youth and racial makeup of the […]