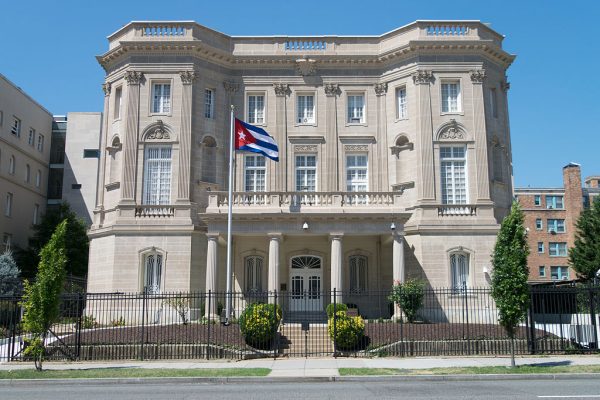 ANALYSIS – Immediately following the Sunday night protest in front of the White House, a mass of mostly young Cuban American pro-democracy supporters peacefully rallied in front of the Cuban Embassy in Washington, DC to protest the socialist dictatorship. Draped in Cuban flags and holding signs calling for freedom and liberty, as well as American flags, the protesters chanted at the gates of the embassy on 16th Street, just blocks from the White House.

These rallies follow weeks of unrest in Cuba against the communist government. And one significant aspect of these protests is the youth and racial makeup of the participants.

As a veteran of decades of anticommunist and Cuba freedom protests, beginning as a child with my parents, it is clear that the old guard of Cuban American freedom fighters has changed from those who fled the violent communist revolution early on in the 1960s to those who have escaped Cuba’s ‘Socialist Paradise’ since the 1990s, after being born into it and enduring it their entire lives.

No longer can regime apologists and propagandists falsely smear anti-communist Cuban Americans as wealthy white oligarchs. These are young and many mixed-race Cubans with very recent experience living under the regime and with family still suffering there.

As vice president, Biden and then-President Obama, like Clinton and Carter before them, cozied up to Castro and finally restored diplomatic relations with Cuba after a five-decade freeze. President Trump maintained diplomatic relations, but quickly tightened other restrictions and added sanctions against the dictatorship which many credit for bringing the communist regime to its knees now.

But what about Biden’s current Cuba team?

One man wearing a shirt that read, “You’re wrong, Joe, Cuba wants freedom,” told Fox News that he would tell Biden to remove the team advising him on Cuba.

“He needs to get all [of] his advisers…get them out of there, and come here and talk to these people. We really know what’s going on” the man said. “The advisers he’s got? They’re supporting communists,” he continued.

And based on the initial reaction from President Joe Biden’s acting Assistant Secretary of State for Western Hemisphere Affairs (WHA), Julie Chung, the man may have a point.

I tweeted a reply to Chung saying:

This is absolutely THE most idiotic thing I’ve seen government official say since Biden’s last press conference, and speech. Shame on you. Cubans are rebelling against 70 [sic 60] years of socialist repression. And chanting LIBERTAD! While waving US flags! Please get a clue.

This is absolutely THE most idiotic thing I’ve seen government official say since Biden’s last press conference, and speech. Shame on you. Cubans are rebelling against 70 years of socialists repression. And chanting LIBERTAD! While waving US flags! Please get a clue.

And the Cuban Americans protesting in DC know the truth.

“It’s painful for me because I have family back there … they’re hiding right now because they don’t want to be taken,” another protester told Fox News.

President Biden, who recently called Cuba a “failed state,” has come under fire for not doing enough to push for change in the reclusive country.

“At least talk about what is happening. At least say the truth. Give a press conference and talk about it,” one protester pleaded to Biden.
ADN

Sleepy Joe Biden doesn”t have the testicular fortitude to act!

Empty suit Obama did nothing also, during the Iranian Green Revolution in 2009!

Why are the police being defunded? That’s an easy one. The Marxist Democrats want to destroy legal law enforcement and Federalize law enforcement like it is in Venezuela, Russia, China and every other Communist/Marxist/Socialist or socialist countries. Without law enforcement to protect the citizens against a lawless government there is no hope. The Elite control the army and the citizens have no protection.

Spot on—many of us know that the phony ballots came from China—We are “at war”.

A more correct statement would be that the cognitively challenged Beijing Briben’s handlers are propping up the Cuban dictatorship. They seem to emulate this style communist authoritarian regime and would love to be in charge of one in this country.

That is why sleepy joe’s name has changed to CHINA JOE.

Higher powers than the White House occupant currently make the decisions. Our coprolitic Imbecile-in-Chief doesn’t have the mental acuity to stand before neutral media and answer questions regarding Cuba. His role is to issue executive orders and intimidate enemies of those harvesting colossal international profits. Our nation could suffer total failure if the criminal enterprise is allowed to continue through 2024.

Unless We quash these Marxist We won’t make it thru the year–The Marxists are on a FAST TRACK for Our republic’s destruction–at the rate they are going Two Million Illegal Aliens this Year—many infected with new virus strains are being flown (by Our government) all over the United states –The goal?–KEEP US LOCKED DOWN–Churches shut down—internet switch–just like Communist china. Wake up folks.

The full truth of Biden’s actions or the lack there of is really simple if you think about it for one minute. .Biden no longer has the cognitive ability that is needed to properly lead the greatest country in the world. By his own comments, “My butt’s been wiped”, is him admitting someone else is caring for his personal needs. It’s time people wake up and do what is needed to get our country back.

Communist Obama is using Susan Rice to “pull” Biden’s strings–they have him doped up and propped up as a puppet , or as Lenin called such a useful idiot.

Sleepy Joe Biden doesn”t have the testicular fortitude to act!

Empty suit Obama did nothing also, during the Iranian Green Revolution in 2009!

#1 Obama was raised by Communists and groomed to “take over” , truth be known by “fake votes”—but that’s another story —the point is Biden is Obama #2.

Communists and socialists are simply dictators in disguise. Every time one of them fails, it frightens the others. The Democrats use the same arguments as Stalin and Hitler, but don’t want to see old Castro’s Cuba fall apart, as a reminder of how socialism and communism really work.
The evil bureaucracy keeps the people under control and the elites in power. The purges have already begun.

Put in the simplest of terms: Socialism seduces–free this & that; but when it becomes Communist Rule–they RAPE–as the government becomes everything–that is why about 200 Million People were slaughtered by Communists in the 20th Century–more than any other 10 Centuries.