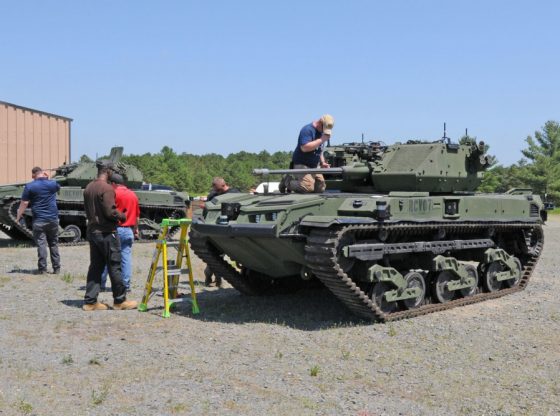 You have seen them in movies from G.I. Joe: Retaliation (really bad) to Fast and Furious 8: Fate of the Furious (pretty good) – fast-moving and firing mini robot tanks. These were actually stripped-down versions of the Army’s M-5 prototype – ‘Ripsaw.’

But now they are just a bit closer to reality.

In November ADN reported that the Army is fast-tracking the development of a new class of unmanned, semi-autonomous robot tanks and other combat vehicles.

According to inputmag, it has issued a draft proposal for a range of new Robotic Combat Vehicles (RCVs) to provide “an extra line of defense” for troops on the battlefield. These RCVs will be able to “drive themselves to the frontlines, detect enemies, shoot missiles out of the sky, and withstand heavy fire.”

Well, the Army finally took receipt of its four RCV-M prototypes earlier this year with plans to put all the vehicles, called ‘Ripsaw,’ through individual testing through September. Janes’ reported that the Army is asking Congress for $84.5 million as part of its fiscal year 2022 budget to continue development of the RCV portfolio and “to help prepare for a soldier experiment.”

According to Task & Purpose:

First unveiled at the Association of the U.S. Army expo in Washington, D.C. back in 2019, the 10-ton diesel-electric Ripsaw has a top speed of 25 miles per hour and comes outfitted with a Kongsberg Defence Systems Protector turret that can be outfitted with a remote-operated 30mm cannon and a 7.62mm coaxial machine gun, according to Army Recognition.

But there is a lot more to the Ripsaw. Task & Purpose notes that:

According to the Congressional Research Service, the service’s fiscal year 2022 plans call for integrating “a variety of RCV modules” on RCV-M prototypes, including “the Common Remotely Operated Weapon Station (CROWS) with a Javelin anti-tank missile.”

“Other modules to be integrated are the XM813 Bushmaster chain gun, as well as smoke obscuration measures, amphibious kits, electronic warfare (EW) modules, counter Unmanned Aerial System,” according to the CRS report.

One of the most interesting features of the Ripsaw is its ability to deploy other drones — namely those developed by FLIR Systems — that can deliver 360-degree situational awareness through high-quality video feeds of the battlespace.

“The battlefield is filled with really awful places where humans do tasks today they shouldn’t have to,” NGCV-CFT director Brig. Gen. Ross Coffman previously explained.

“But today, with the way our technology has advanced, our robotic vehicles can move forward of a manned force to see what’s out there, detect chemicals, put direct fire on the enemy, determine whether or not there’s an obstacle, and then team with humans to determine the best course of action.” ADN

See Why One B-2 Stealth…

Well finally, it looks as if we finally have a piece of offensive military equipment that can be
sistered with a multidrone observer patrol to wreak havoc upon the damn chinks and lay them out with none of our troops being exposed,

They can name it the M1 Biden Robotic Tank, named after a Robotic President