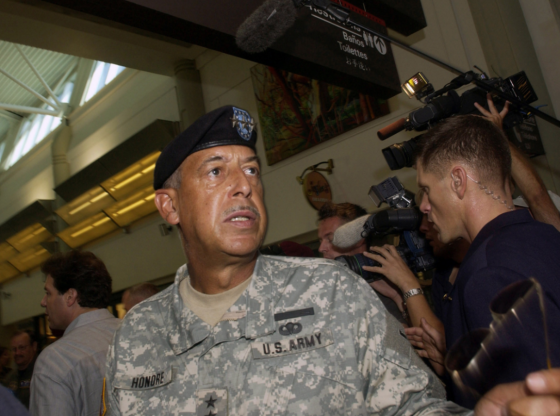 ANALYSIS – Ret. Lt. Gen. Russel Honoré, House Speaker Nancy Pelosi’s hand-picked choice to conduct a security review following the Capitol Riot, now says he believes the Trump White House was “complicit in the planning” and bears ultimate responsibility for the riot. Considering his prior racist, partisan anti-GOP and anti-Trump posts and tweets, Honoré should have been the last person chosen to lead a fair and impartial inquiry of the Capitol Riot.

And he is certainly the last person to listen to now.

The retired Army general, also known as the ‘The Ragin’ Cajun,’ once tasked with leading the military response to the Hurricane Katrina aftermath in 2005, sadly has a foul mouth and worse temper. But worse, he has proven himself a true partisan hack.

In one now-deleted tweet aimed at Republican Sen. Josh Hawley from January 2021, Honoré called Hawley a ‘little piece of sh*t and said he should be run out of DC, adding that all these Yale and Harvard grads are ‘high order white privilege.’

But there’s much more than that. This piece includes a long list of screenshots of Honoré’s now-deleted anti-Trump tweets and retweets that show his vicious hatred towards Trump and Republicans. This prompted Republican Sen. Ron Johnson to say at the tie Pelosi appointed him:

General Honoré is an extreme partisan and should be the LAST person to head up an investigation of what happened at the Capitol on Jan 6th.

So, it should come as no surprise that Honoré should now go on MSNBC, and without any evidence, blame former President Trump for being ‘complicit in the planning’ of the January 6 riot. Business Insider reported:

“It’s my personal opinion that the executive branch was complicit in the planning and the delayed response that occurred in bringing in more federal assistance to the Capitol that day,” Honoré said during an MSNBC appearance, underscoring that he had not reached this conclusion from the security review he spearheaded.

“That’s my own perception, based on what I’ve seen and what I’ve heard and by the fact the former president is continuing to tell people, ‘This was not a riot, it meant no harm, it was like a picnic,'” Honoré said, adding, “The last I heard from him, he told them to go to the Capitol and raise hell.”

Note that Honoré specifically states that this is pure conjecture and speculation on his part, and not based on any evidence or information gained from his Capitol Riot security review.

His wild speculation was also contradicted by testimony and statements from numerous Capitol, White House, and Pentagon officials who stated at various times numerous reasons and factors for the delayed military response to the Capitol riot.

So why should General Honoré’s opinion matter now? It shouldn’t. Except to those few hard-core left-wing partisans who watch MSNBC. ADN

LOL! What a DA fool!

The enemy will wear uniforms familiar to you.  Skirmishes are won.  Prisoners taken for interrogation. Intelligence gathered and battles become larger.  Preparation is key!

Every State must activate 500,000 militia that work with local Sheriff’s in cases of natural disasters, foreign invasion or attacks from within.  America is 5% global population including our colonies and States cannot depend on seditious Washington D.C. for aide.

Before I go…Fabian Communist Rockefeller Republicans & Menshevik/Bolshevik Democrats stole 40 trillion dollars of United States treasury in 20 years!  No one is innocent in war. 🇺🇸

Disarm and disband federal corrupt institutions within your States and activate local militia to work with sheriff’s, local & state police.

Clandestine Communist Operations #1 activity is destroy the United States economy!  If Communists succeed in shutting down the engine that fuels the free world everything around you is lost!

Your job isn’t real.  Grocery stores.  Heat.  Water circulation in your home.  ALL SHUT DOWN never to return until slavery thru Communism is recognized.

I ask you nation of fools, how free are you?  When will your fight?🇺🇸

Don’t get stuck on stupid, General.

She stacks the deck and still loses. Any sense of fair play is alien to her. I bet she cheats at Solitaire.

She has to be the most corrupt, the wealthiest from insider trading, the greediest, slimey swamp creature in the Washington D.C. Corruption SWAMP

Sea hag from the SWAMP.

I thought Honore was great during the Katrina Hurricane and saved many lives.. It seems he has taken a HARD LEFT TURN lately.. Too much of the Pelousie KOOL AID. Perhaps he is only hearing what he wants to hear. I am losing my respect for Honore for arresting over 400 folks who were at the Capital and peaceful. Those with masks will not be prosecuted nor will his BLM friends..

Russell didn’t do jacksh#t but illegally disarm honest citizens and never returned their property. Russell is a Communist loyal to Soviet Negro Republic

This guys a real piece of shit hes the one who should be run out of DC. And further morethis commie should be put away

The Constitution is the Bill of Rights.

The United States Constitution “ordains” temporarily all “creatures of statute” in Title Code of the Constitution. These God given Rights are grandfathered in to all future generations and if attacked by temporary stewards in trust the citizens are to mobilize,  attack, arrest or execute treason against this Constitution!  Rights can be expanded but never rescinded!  That is war under Title 6! 🇺🇸

LISTEN UP….The DEMOCRATS Already Have RESERVATIONS to the FIERY PIT. GOD is TIRED of Their WICKED WAYS. JUDGEMENT is Already HERE on EARTH….to JUDGE the LIVING and the DEAD. From SamuraiQueen. 😄😄😄

RE: LTG Honore joins GEN Mark Milley; as standing examples of the DOD policy outlined below that has laid the foundation for the current crop of senior military officers.

PS Any of you civilians ever wonder why old soldiers and cops say things like:
1). The American people are the most effectively lied to people in modern times thanks to American politicians, bureaucrats, academicians, and the media!
2). The greatest threats to the American people are the incompetent/corrupt/witless/self-serving/cowards among their politicians, bureaucrats, academicians, and media!
3). My guns were always turned in the wrong direction!
4). It’s folks like Maxine, Nancy, Chuck, Mitch, etc. to cause many of us old Soldiers/Cops to admit that we have failed to protect the American people from all of their enemies, both foreign and most especially domestic!

Yep, this is the type that Peloski loves…Trump haters. Just look at her panel she has assembled to investigate the Jan. 6th event in DC.

BOY WHAT A LINE OF CRAP HERE! ANOTHER TRUMP HATER TO KEEP TABS ON HIS FOLLOWERS! THIS IS TURNING INTI ” PUKE SAUCE AND THE SCAB SANDWICH CAPADES”!

I respected him during & after Katrina. No more. I never realized he was a such a partisan -sshole. It’s like he totally changed!

Ret. Lt. Gen. Russel Honoré AS “IMPARTIAL” judge, according to this article is NOT… for various reasons.

I believe the reasons given in the article provide ample questions about his ability, sincerity, and unbiased judgement of the facts.

Personally, I do not prejudge persons or outcomes except where I perceive that my failure to do so will result in a turn of events which our system will fail to correct timely.  Predicting failure to correct an unjust outcome has been the most difficult rationale to reach objectively simply because objectiveness is sometimes the very problem to overcome.  The sage statement; “Can’t see the forest for the trees”, comes to mind.

My reason for not prejudging is my distain for prejudice / bias proceeding to outcome.  My belief that what truth appears to be may not in fact be true, and/or vice versa.

I would not choose anyone that had demonstrated bias / prejudice; especially in a political decision. I am not a democrat, republican, nor liberal; I choose to call myself an American.

What horrible thing crawled up thius General’s a$$?

Nothing like basing an INVESTIGATION on personal opinion and conjecture. That’s comforting. Just illustrates what a totally partisan and divisive hack Pelosi is and she needs to be removed from her speakers position. She’s supposed to speak for all Americans, not just those she favors. She’s a fraud along with her investigations. BTW… why did Nancy leave the Capitol so woefully unsecured on 1/6/21? There’s more to that story than they are willing to say or investigate.

Military professionals aren’t normally interchangeable with political professionals. It’s an established principle that applies to higher military ranks, especially generals. This creep may have achieved his higher rank by capitalizing on political friendships and finds it difficult to break his habits. His behavior during Katrina raised my suspicions and they’ve now been confirmed.

This pos general needs to be stopped and discarded. Liberal trash

What a dkhead. Yeah i said it. Whatcha gunna do Jeneral???