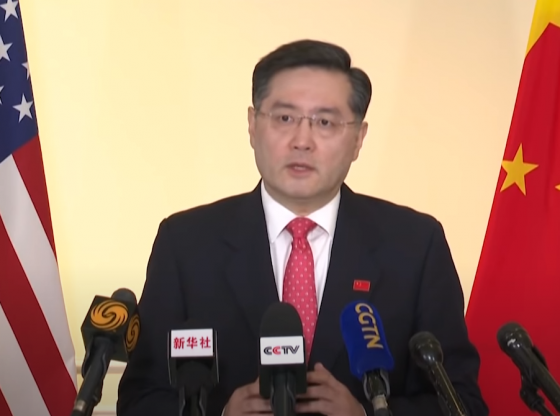 Despite repeated claims from Beijing that they intend to change, at least the tone, of their belligerent diplomatic behavior, Qin Gang, China’s new ambassador to the U.S., was an early pioneer of the Chinese Communist Party’s (CCP’s) aggressive “wolf warrior” style of diplomacy. As a Foreign Ministry spokesperson, he would mock members of the media, once telling a journalist: “I hope you can report based on reality, not based on your delusions.”

And this week highlighted the belligerent approach when China used Deputy Secretary of State Wendy Sherman’s meetings with officials in Tianjin to bombard the U.S. with harsh criticism.

…upon taking up his new post this week, Beijing’s latest envoy struck a soothing tone at a time of high tensions with the United States. He promised to “endeavor to bring China-U.S. relations back on track, turning the way for the two countries to get along with each other.”

However, it adds: “Pretty much no one in Washington is buying it.” This belligerent, in-your-face style is increasingly defining Beijing’s approach to the United States and the world.  NSD continues:

Whether in the Biden administration or the broader D.C. foreign policy establishment, the expectation is that Qin will be an undiplomatic diplomat — one happy to toss rhetorical spears at his hosts. Simply the fact that Qin was chosen for a job long held by the more traditional, low-key CUI TIANKAI is a signal that Beijing isn’t planning to play nice anytime soon, China watchers say.

Some caveats, of course: Diplomats don’t have that much power in the Chinese communist ruling structure, and it’s not quite clear how close Qin is with the man who really matters, Chinese leader XI JINPING.

Either way, Ambassador Qin will need to prove himself to be credible, especially regarding human rights for the Uyghurs in Xinjiang. U.S. lawmakers from both parties recently slammed Beijing for its abuses — especially its crackdown on Uyghur Muslims in the Xinjiang region during a hearing about corporate sponsorship of the 2022 Winter Olympics in China.

NSD quoted her as saying: “I will be watching very closely to see if his superficial assertiveness is actually underpinned by a willingness to engage in factual discussions, instead of saying all is peaceful and harmonious and everyone is happy in Xinjiang.” ADN

The world will hold china responsible for the virus, they will owe trillions to the world for spreading this bio=terrorist, plague that has killed millions. Their cover=up has been exposed, this was an act of war, we should treat it as such, except we have a spineless adminstration, scared to stand up to china,because their in bed with china.

Exactly! I Stated that Covid is/was a Bio-Weapon when it first appeared! China has got to be Stopped!

Demorats: “Oh look, isn’t it NICE that they sent their top warrior to negotiate with us”. Those still attached to reality: “Looks like intimidation to me. And with these pansies running the country into the ground, it will work”.

And here I thought it was going to be a picture of Biden.

Most people are tired of looking at that fool already.

It wont be too much longer, we will be at war… and due to the open borders are there “enemy” among us???? Forget about COVID 19 (Chinese Originated Virus Infectious Disease 2019) … Oh, and another thing … Jimmy Carter signed a “White Paper” along with the rest of the leaders of the world at the time – stating that Taiwan was part of China … (Just as “Long Island” is part of New York City)… now we going to uncork that Genie??? Washington does not have a shortage of as sholes…..