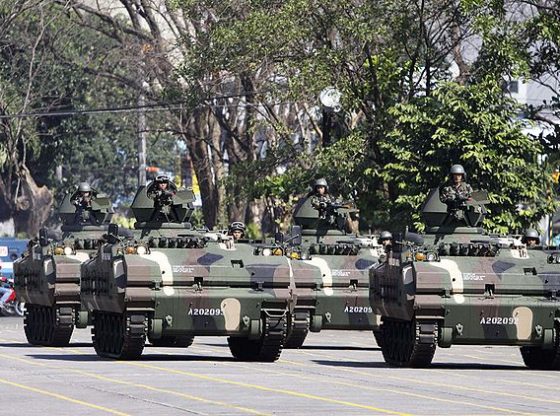 Philippine Army Vehicles in a Parade /

As part of what I earlier called Philippines’ President Rodrigo Duterte’s game of ‘balance the Dragon and the Eagle,’ or making military moves to please both the U.S. and China, Duterte notified the U.S. government in February 2020, that it intended to abrogate the critical 1998 Visiting Forces Agreement (VFA).

This key defense pact allows the entry of large numbers of American forces for joint combat training with Filipino troops and lays down the legal terms for their temporary stay.

As I noted then: “This was seen as a huge blow to long-standing U.S.-Filipino military relations, and a gift to Beijing.”

In addition to protecting the Philippines from the China threat, the U.S. supports the Philippines with a robust counterterrorism program, and a major counterinsurgency effort in Mindanao, the country’s largest island, since 2000.

After several extensions to the abrogation by Duterte which many believed was, in part, intended to wring more concessions from the U.S., Duterte has finally agreed to reverse his original order and restore the VFA with the United States.

The VFA allows the U.S. military to conduct more than 300 bilateral engagements a year with the armed forces of the Philippines. These range from military exchanges to ship visits and major joint/combined training exercises.

Beyond the VFA, the two defense leaders reportedly discussed ways to deepen and reinvigorate the security alliance, including maritime cooperation and U.S. support to the Philippines to modernize its armed forces. “They also discussed investments that will help the Philippines navigate the region’s complex security environment.”

“We also talked about how we can work toward a free and open Indo-Pacific rooted in a rules-based international order, a region in which countries work together to realize their highest aspirations and to safeguard the rights of all other citizens,” Lorenzana added. ADN

I hope I’m wrong but I smell a multi-billion-dollar restoration and modernization of Subic Bay — and another humongous paycheck for the slime balls now squatting in the Oval Office and of course Duterte. Upon completion, a reversal and alliance with CCP would create a natural bulwark against any threats from the Pacific Ocean. The winners other than our Imbecile-in-Chief? China. Losers? Every conservative nation on earth. Just guessing.

I totally agree with you about the current traitors in the WH. The positive spin on this report however is that Duterte has weighed/compared the two alliance options (China and the US) and has decided that long term he would be better served to have the US on his side, once we get a patriotic administration back in the WH. If that doesn’t happen, it’s still the best choice Duterte could make under the circumstances. Alliance with the CCP is a 100% loser for the Philippine people and Duterte knows that.

Sure because they want our protection.

Thank the Lord! Obama strained relations with our great allies in Philippines! We fought side by side against unspeakable evil concreted in blood and suffering. May our bond never be broken.🇺🇸🇵🇭

Sorry John, but your facts are wrong re’ Pres’ Obama. I was in-country when he visited the PI and the relations were good (getting even better). It changed when Duterte came to power. The relationship did not change under the Trump administration. It’s about to change for the better now. Stay tuned.

Well, SOMEBODY has to be The Big Guy. If not US, who do you want in charge, China? Think again.

I also smell dirty rats, when u need protection, call the US, that seems to be all were good for. real fishy!

Don’t worry Philippines, Biden will send you a brigade of limp wristed transexuals armed with the latest nail polishes willing to break a nail for you protection.

Let’s hope not. As a matter of fact, If the present administration is not careful, the USMC will be the only service branch left with real men, ready, willing, and able.